It may be a while before a new movie hits theaters in Massachusetts during the coronavirus pandemic, even with the prospect of Gov. Charlie Baker reopening the economy and drive-in theaters pushing to resume business.

Almost every major studio release planned for this summer has been postponed, with only a few titles still tentatively slated to open nationwide in July.

Among the many delayed films include titles that were filmed right here in Massachusetts, including “Free Guy,” the Ryan Reynolds action comedy that turned Boston into one giant video game during filming in 2019, and “New Mutants,” the oft-delayed X-Men spinoff filmed in Medfield, Millis, Lynn, and Weymouth back in 2017.

Luckily, the Massachusetts Production Coalition, which represents the local workers on the many productions, put together a list of movies and shows filmed in Massachusetts from the last five years that you can stream right now.

There’s something for every taste and for every major streaming platform. No matter your preferences — highbrow vs. lowbrow, Netflix vs. Hulu — at least a few of these 23 titles are likely worth a watch. If you want an even longer list that includes movies filmed in Massachusetts available to rent or on demand, check out the coalition’s website.

Plot: “American Woman” tells the story of a working-class mom (Sienna Miller, “American Sniper”) who takes care of her granddaughter once her daughter goes missing. Along with Miller, the cast features Aaron Paul (“Breaking Bad”) and Christina Hendricks (“Mad Men”) in prominent roles.

How to watch: “American Woman” is now available on HBO Now.

“Annabelle Hooper and the Ghost of Nantucket”

Plot: During a family vacation to Nantucket, a teenage writer searching for her first great story stumbles across a centuries-old mystery that seems like the perfect fit.

Filming locations: “Annabelle Hooper and the Ghost of Nantucket” was filmed on Nantucket.

How to watch: “Annabelle Hooper and the Ghost of Nantucket” is now available on Netflix.

Plot: Both season one and season two of the Stephen King anthology series were filmed in Massachusetts, with each season telling a different story of characters familiar to fans of the King universe. Stars who show up in the cast include Lizzy Caplan (“Mean Girls”), Tim Robbins (“The Shawshank Redemption”), Elsie Fisher (“Eighth Grade”), and Barkhad Abdi (“Captain Phillips”).

How to watch: “Castle Rock” is now available on Hulu.

Plot: A drama about the fateful night when Ted Kennedy (Jason Clarke, “Zero Dark Thirty”) drove his car off the bridge with Mary Jo Kopechne (Kate Mara, “Shooter”) inside in the summer of 1969. The film also spends plenty of time showing the aftermath, when the tight-knit Kennedy clan came together in an attempt to protect Ted’s reputation.

How to watch: “Chappaquiddick” is now available on Netflix.

Plot: Based on a 2012 novel of the same name by local author William Landay, “Defending Jacob” is a limited series set in Newton and concerns assistant director attorney Andy Barber (Chris Evans, “The Avengers”) whose whole life changes when his 14-year-old son, Jacob (Jaeden Martell, “It”) is accused of killing a classmate. Initially, Andy and his wife, Laurie (Michelle Dockery, “Downtown Abbey”), dismiss the charges as baseless. But as evidence against Jacob begins to mount, Andy takes matters into his own hands.

How to watch: “Defending Jacob” premiered on Apple TV+ in April. New episodes are out each Friday until the May 29 finale.

Plot: Director Kathryn Bigelow (“The Hurt Locker,” “Zero Dark Thirty”) shifted her focus from the Middle East back to America for this 2017 film, which chronicles the Detroit riots of 1967, focusing on the incident at the Algiers Motel that left three black teenagers dead and many others brutally beaten by police. The film features a large ensemble cast including John Boyega (“Star Wars: The Force Awakens”), Will Poulter (“The Revenant”), and Newton native John Krasinski (“The Office”) with a cameo role.

How to watch: “Detroit” is now available on Hulu.

Plot: Loosely based on a 1980s TV show of the same name, Denzel Washington (“Training Day”) plays Robert McCall, a retired covert government operative who is hiding out in Boston as a Lyft driver and enacting vigilante justice.

How to watch: “The Equalizer 2” is now available on Starz.

“Father of the Year”

Plot: When two college graduates get in a drunken debate about whose father would win in a fight, their dads, David Spade (“Tommy Boy”) and Boston native Nat Faxon (“The Way, Way Back”), take the argument way too seriously, leading to a ludicrous sequence of events that costs jobs and relationships.

How to watch: “Father of the Year” is now available on Netflix.

Plot: A dark comedy about a disgruntled actor who unwittingly places the curse of Shakespearean tragedy “Macbeth” on his fellow thespians.

How to watch: “Ghost Light” is now available on Showtime.

How to watch: “Ghostbusters” is now available on Hulu with a subscription to FX.

Plot: A once-famous writer who is struggling with writer’s block encounters a woman named Dawn who has been sent by his agent to shake some sense into him. Dawn has her own ideas about what the writer needs, though.

How to watch: “Grace” is now available on Showtime.

Plot: Renee Bennett (Amy Schumer, “Trainwreck”) is an insecure Manhattanite who is determined to feel as beautiful as the models she encounters each day. Then, when Renee injures her head during an indoor cycling class, she wakes up believing she is the pinnacle of beauty.

How to watch: “I Feel Pretty” is now available on Showtime.

“The Man Who Killed Hitler and then the Bigfoot”

Plot: This indie film stars Sam Elliott (“A Star is Born”) as Calvin Barr, a World War II solider who, for decades, has carried the secret that he offed Adolf Hitler. He’s suddenly called back into action when the government wants him to help prevent a disease outbreak by venturing deep into the woods and killing patient zero: The Bigfoot.

Filming locations: “The Man Who Killed Hitler and then the Bigfoot” was filmed in Gill, Greenfield, Lenox, Montague, and Sunderland.

How to watch: “The Man Who Killed Hitler and then the Bigfoot” is now available on Hulu.

“Manchester by the Sea”

Plot: One of the best movies of 2016, “Manchester by the Sea” won Casey Affleck (“Gone Baby Gone”) an Oscar for his performance as depressed janitor Lee Chandler, who must rise to the occasion and take care of his nephew (Lucas Hedges, “Lady Bird”) after the boy’s father passes away.

How to watch: “Manchester by the Sea” is now available on Amazon Prime.

“The Possession of Hannah Grace”

Plot: After a grisly exorcism takes the life of a young woman, a morgue worker receives a grisly cadaver during the graveyard shift. Soon, the worker begins to see shocking visions, leading her to believe the corpse is possessed.

Filming locations: “The Possession of Hannah Grace” was filmed in Boston.

How to watch: “The Possession of Hannah Grace” is now available on Hulu with a subscription to Starz.

“Professor Marston and the Wonder Women”

Plot: Psychologist William Moulton Marston was born in Saugus, graduated from Harvard, and taught at Tufts. He invented the lie detector and created Wonder Woman, a feminist icon. He also had a secret, living with his wife, Elizabeth, and another woman, Olive Byrne, in an unconventional relationship. The biopic features Luke Evans (“Beauty and the Beast”) as Marston, Rebecca Hall (“The Town”) as his wife, and Bella Heathcote (“Fifty Shades Darker”) as Byrne.

How to watch: “Professor Marston and the Wonder Women” is now available on Hulu.

Plot: “Proud Mary” is the tale of a hitwoman named Mary (Taraji P. Henson, “Hidden Figures”) who works for an organized crime family in Boston. Her professional life changes when she meets a young boy who is left orphaned when one of her hits goes awry.

How to watch: “Proud Mary” is now available on Hulu with a subscription to FX.

“Selah and the Spades”

Plot: Set at the fictional Madewell boarding school, which is played in the film by the Academy at Penguin Hall in Wenham, “Selah” centers around Selah Summers (Lovie Simone, “Blue Bloods”), the 17-year-old leader of one of the school’s five underground factions who supplies the wealthy student body with booze and drugs.

Filming locations: “Selah and the Spades” was filmed in Hamilton, Peabody, Marblehead, Newton, and Wenham.

How to watch: “Selah and the Spades” is now available on Amazon Prime.

Plot: Based on a fictional monster created on the internet message board Something Awful in 2009, “Slender Man” tells the tale of the faceless, long-armed creature that haunts and abducts children and teenagers.

Filming locations: “Slender Man” was filmed in Devens and Lancaster.

How to watch: “Slender Man” is now available on Hulu with a subscription to Starz.

Plot: Students of fictional Connecticut suburb West Ham head out on a retreat to the Smokey Mountains. When they return, everyone else is gone. Instead of West Ham, they’re in New Ham — or West Sham, as one vandalized road sign reads. It’s a picture-perfect replica of their old town that has zero contact with the outside world. Think a preppy New England “Lord of the Flies.”

How to watch: “The Society” is now available on Netflix.

Plot: “Spenser Confidential” begins with ex-Boston cop Spenser (Mark Wahlberg, “The Departed”) completing a five-year prison stint in Walpole for beating up a corrupt police captain. After he gets out, he plans to briefly stay with his old friend Henry (Alan Arkin, “Argo”) before leaving Boston for good. That’s the plan, anyway — before the corrupt captain and one of Spenser’s detective friends from the academy turn up dead. With the help of Henry and his roommate, aspiring MMA fighter Hawk (Winston Duke, “Black Panther”), Spenser digs deeper into a sprawling criminal underworld.

How to watch: “Spenser Confidential” is now available on Netflix.

Plot: Based on the 2014 romance novel of the same name, “The Will” follows a woman named Josephine whose grandmother, the only person she truly trusted, has passed away. In her grandmother’s will, she discovers she has been “bequeathed” to Jake, a retired boxer with a penchant for getting into trouble.

Filming locations: “The Will” was filmed in Beverly, Lynn, North Reading, Peabody, Rockport, and Swampscott.

How to watch: “The Will” is now available on Amazon Prime with a subscription to Passionflix.

Plot: A getaway driver (Frank Grillo, “Captain America: The Winter Soldier”) is double-crossed during a botched bank heist. He escapes with his life, but with his family facing imminent threat, he must unravel who betrayed him.

How to watch: “Wheelman” is now available on Netflix. 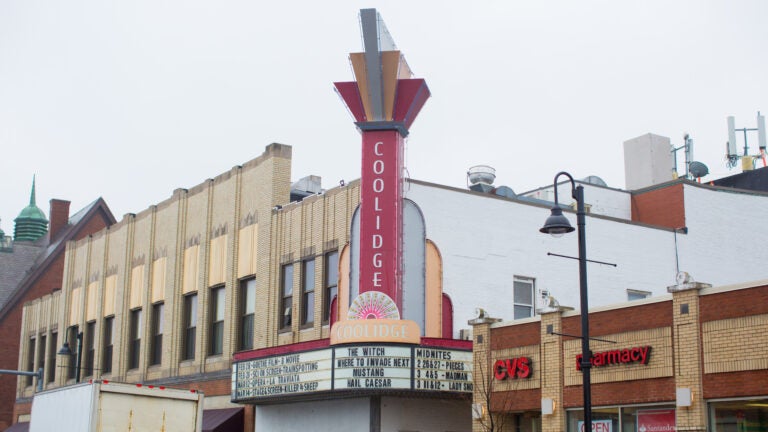 ‘We’re all trying to survive’: Local movie theaters are fighting to prevent the final curtain