According to the Phase 3 reopening guidelines in Massachusetts, no more than 25 people (including staff) are allowed in a single enclosed space.

For David Bramante, the owner of West Newton Cinema, which reopened its doors on July 17, that hasn’t been a problem.

“If I could get 25 people in a theater, that would be great right now,” Bramante said.

West Newton Cinema is one of the few movie theaters that has reopened since Phase 3 was instituted on July 6, allowing businesses like theaters, museums, and gyms to reopen. National theater chains like Regal and AMC, the largest theater chain in America, have delayed their planned reopenings several times in concert with the ever-changing release date of Christopher Nolan’s “Tenet,” which is expected to be the first blockbuster of the year.

Local cinema owners, meanwhile, have encountered several hurdles when considering reopening. There’s the issue of consumer demand: In a survey of Boston.com readers, only 10 percent of respondents said they would visit a theater during Phase 3. There have also been questions about the interpretation of language in the state’s guidelines about concessions, which account for a large chunk of theater revenue. Most of all, theater owners, already stung by months of closures, wonder whether they will be able to generate sufficient revenue while complying with the state’s rules.

In a newsletter sent earlier this month, the Coolidge Corner Theatre in Brookline explained why it has no current plans to reopen.

“The guidelines outlined by the Commonwealth specify that no more than 25 people at a time can be in an enclosed, indoor theater,” the letter read. “This directive translates to the Coolidge, as a nonprofit organization, operating at 7% capacity, posing serious financial consequences, especially given the considerable additional costs of implementing safety measures.

“We have confidence in and are grateful for the State’s leadership throughout this crisis, but the reality is, we cannot commit to a reopening date at this time,” the letter concluded.

Coolidge Theatre CEO and executive director Katherine Tallman said that since sending that email, The Coolidge has begun to consider the possibility of private theater rentals for groups, which offer guaranteed revenue rather than the speculation of individual ticket sales.

But it has no plans to fully reopen with the 25-person cap in place.

“We’d prefer some percentage of the venue rather than treating every venue as the same thing,” Tallman said, noting that the theater’s main auditorium has a 440-person capacity. “Our guys have put orange straps on every seat that is not open, and it’s hard to find a seat you can sit in. To find 25 seats in a 440-person theater is like finding a needle in a haystack.” 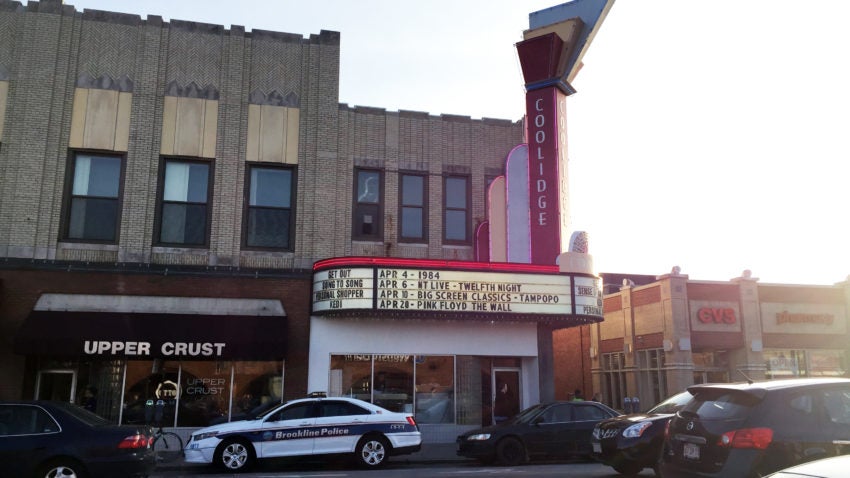 Brattle Theatre executive director Ivy Moylan said she and creative director Ned Hinkle are also planning on testing out private rentals, and have been listening to feedback from constituents about whether there’s interest in reopening.

“That’s the big question we have right now, seeing what the community wants,” Moylan said. “Members and donors have been so supportive while we’ve been closed. But with the bad news coming from the rest of the country, we’re a bit nervous about reopening.”

One issue that has confounded theater owners is the issue of concessions. The state’s guidelines for movie theaters and performance venues says that “food service is only permitted at outdoor venues.” After West Newton Cinema began serving concessions, Tallman said she began to ask around to figure out what was possible. Moylan, meanwhile, says she reached out to the state for clarification; officials told her that the issue was up to individual towns and cities. Last week, she received good news from the city of Cambridge.

“We got confirmation from the city that pre-packaged concessions — which are what we were planning on doing — are not considered food service,” Moylan said. “When we heard that, we were beginning to consider reopening, because ticket sales alone never support any movie theater.”

Beyond the profit motive, Moylan said that reopening with concessions would provide additional incentive to theatergoers and give them a “joyful experience.”

“We’ve gotten feedback from people saying, ‘I just want to drink a beer and watch a movie at the Brattle,’ and we wanted to provide that,” Moylan said.

Concessions are certainly a focus for Bramante at West Newton Cinema. In order to entice audiences to come back, he began offering a deal the theater used to occasionally offer in the ’90s: A movie ticket, popcorn, and soda for $5. Bramante said that he wanted to thank theatergoers for their loyalty, many of whom he said had not heard about the deal until arriving at the theater.

“Frankly, I was thinking, you come in just for the $5 for a popcorn and drink, who cares what the movie is?” Bramante said. “You could just get the concessions and leave.”

Just a reminder that this is what our $5 bag of popcorn looks like! DM is, or text 617-909-7581 to order your bag! If you feel like staying for a movie, that’s also $5!! We appreciate you for what you’ve done for us! Come celebrate with Popcorn! #newton pic.twitter.com/PBPvpElXur

While these questions are ironed out, theaters nationwide are taking action. Earlier this month, a number of local theaters, including the Coolidge Theatre, Brattle Theatre, Somerville Theatre, and Capitol Theatre all posted messages on social media as part of the Save Your Cinema campaign.

The COVID-19 pandemic has put movie theaters across the country at risk of going dark for good. Without swift action from Congress our favorite theaters could close forever! Act now and send a letter to tell your legislators to #SaveYourCinema: https://t.co/8cAW4G3Mdy pic.twitter.com/hJRnYmRYL5

Dear Brattle friends: Movie theaters need your help! Without government aid, theaters across America are at risk of permanently closing. Act now and send a letter to tell your legislators to #SaveYourCinema: https://t.co/apnLZgLdPU. pic.twitter.com/LnjZeBKUUd

Organized by the National Association of Theatre Owners, the campaign calls on Congress to pass the RESTART Act, which, according to NATO, would give movie theaters “access to partially forgivable seven-year loans covering six months of expenses.”

According to The Hollywood Reporter, since the campaign’s launch, more than 200,000 letters have been sent to Congress. In a statement sent to several trade publications, NATO director of government relations Esther Baruh thanked theatergoers for their “passionate response,” and said that the campaign had “exceeded expectations.”

Tallman  says that NATO’s local office has helped her as well, lobbying at a state level to reconsider the 25-person capacity and offer clarity on food service. Just before speaking to Boston.com, she had heard that an independent theater in Chicago had been approved to screen “Tenet” in 70mm — which the Coolidge uses for special screenings — with a capacity of only 50 people. If she could get Massachusetts to approve a 50-person capacity, Tallman said, things could change.

“This whole ‘Tenet’ thing came up five minutes ago,” Tallman said. “We went from ‘No way we’re opening’ to maybe opening in early August, because Warner Bros. wants theaters to screen ‘Inception’ the week before ‘Tenet.’

“Call me in half an hour, everything will probably be different again.”

Even with the positive steps being taken, there are many unknowns in both the short and long term for theaters. Hinkle said he worried about reopening the Brattle later this summer, only to have to close again in the fall or winter if coronavirus cases spike or consumer demand withers.

Bramante says that he has typically only hit half or less of the state’s 25-person capacity, and that he’s been racking up air conditioning expenses. While he was excited West Newton would be getting the first theater-only release since March (Giuseppe Capotondi’s “The Burnt Orange Heresy”), he also fretted about what movies he might show when the new releases eventually dry up.

“Nothing has been in production since this started,” Bramante said. “We’ll get some new product when the delayed movies come out, but then what’s behind that?”

There are other warning signs as well. At least one theater that resumed operations earlier this month has already shut down again. The Lexington Venue reopened on July 10, offering both old movies and the recently released “Irresistible,” starring Acton native Steve Carell. Less than a week later, the theater announced it would be closed indefinitely. (The Venue did not return a request for comment.)

“Several factors have made our reopening at this time unmanageable,” The Venue wrote on Facebook. “We will be open today and tomorrow, then Friday, Saturday and Sunday will be our last days open for sometime. Shows originally scheduled for this Wednesday and Thursday are cancelled.”

Moylan said that movie theaters — and the arts in general — are facing a struggle of massive proportions.

“The arts are being singularly challenged and threatened by this pandemic because the business model of music venues, live theater spaces, and cinema spaces involves bringing people together to experience something as a group,” Moylan said. “Generally speaking, in disasters, those are not places that get bailed out in the same way. But they’re part of what makes a community vibrant.”

Moylan’s assessment reflected what NATO has been saying during the Save Your Cinema campaign: Without government intervention, many cinemas could disappear for good.

“Theaters are the beating hearts of the communities they serve,” Barush said in the aforementioned statement. “They drive local economies and boost neighborhood businesses. But without more help from Congress, we fear for the future of the industry.”