For about 30 minutes Thursday night, the Boss became the professor.

Rock ‘n’ roll icon Bruce Springsteen, ditching his leather and denim for a crisp blazer, addressed the Boston College Class of 2024 via a Zoom call from his New Jersey home studio as the featured speaker of the school’s annual “First Year Academic Convocation.”

This year, students received an e-copy of Springsteen’s 2016 best-selling memoir, Born To Run, and a reading guide to spark their reflections on the text, which chronicles Springsteen’s own musings, from his beginnings in his hometown of Freehold, New Jersey to worldwide stardom.

Springsteen’s speech came on the same day that the musician dropped his latest single “Letter To You,” the title track of his 20th studio album due out Oct. 23. The record brings Springsteen back with his storied E Street Band for the first time since 2014’s “High Hopes,” and follows last year’s solo release, “Western Stars.”

Springsteen, whose son Evan graduated from Boston College in 2012, told the students that he regretted not participating in the college experience.

“Now I, like you, have a high school diploma,” Springsteen said. “But I am 70 years old, and I do not and will never have a college degree.”

“What you’re about to embark on will be the greatest adventure of your young life,” Springsteen continued. “You can waste it, you can half-ass your way through it, or you can absorb every minute of what you’re experiencing, and come out on the other end an individual of expanded vision, of intellectual vigor, of spiritual character and grace, fully prepared to meet the world again on its own terms.”

Beyond broader messages about working hard and studying something that you love, Springsteen had advice more directly applicable to current events for what he dubbed the “Coronial generation.”

He told all of the students to vote, calling it an “enormous privilege.”

“We’ve recently seen how fragile our democracy can be,” Springsteen said. “You stand sentry at the door of a free nation. We need your judgment. We need your vigilance, and your commitment to a greater America, the America that we carry in our hearts.”

Springsteen concluded his speech by acknowledging that the incoming students faced one of the greatest challenges of multiple generations, but reminded them that putting in the work to improve society was what made them Americans.

“The distance between the American dream and our American reality remains greater than ever,” Springsteen said. “It will soon be in the hands of your generation to do your damndest to make up and heal that divide. That’s a lot to ask, but that’s what it means — if you’ll excuse me — to be ‘Born in the U.S.A.’”

Following his speech, Springsteen answered questions from BC’s students, touching on topics like the music industry, his love for his wife and kids, and systemic racism.

One student asked Springsteen about his 2000 song “American Skin (41 Shots),” which he wrote about the Amadou Diallo, who was shot 41 times by NYPD plainclothes officers who thought Diallo was reaching for a gun when he was reaching for his wallet.

“I’m sad that it remains relevant, but I’m not completely surprised, because we as a country haven’t done the work necessary to address the systemic racism that pervades every corner of our society,” Springsteen said. “But we are living, right now, at a moment of critical mass due to technology of the cell phone — which has allowed us to provide record and to give witness to the crimes perpetrated against people of color — and the Black Lives Matter movement, which has put those issues front and center as never before.”

Springsteen went on to say that systemic racism was an “existential issue” for the country that needed engagement of multiple generations of Americans.

“Along with this pandemic, it’s the issue of our times, and we will be judged as a country as to how well we hold up our promise that all men are created equal,” Springsteen said. “Your generation will be essential in this decision.” 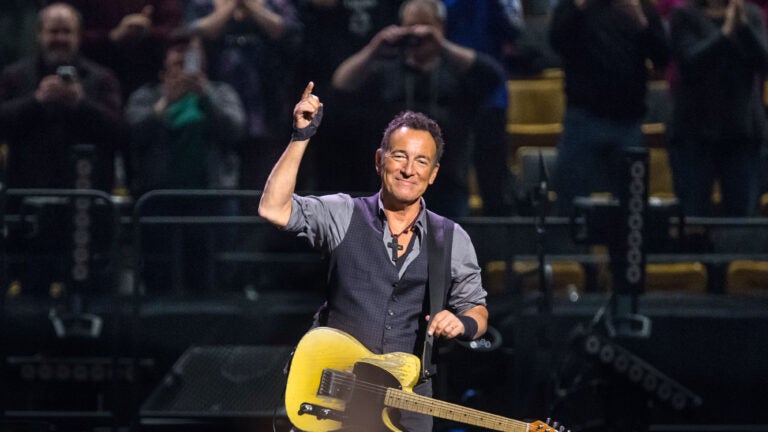