The war of words between John Oliver and Danbury, Conn., has reached a charitable end.

At the end of Sunday’s episode of “Last Week Tonight,” Oliver revealed that he visited the Connecticut city for a ribbon-cutting ceremony for its sewage treatment plan, newly named after the comedian.

Back in August, Oliver profanely insulted Danbury during an episode of his show, which led Danbury’s mayor Mark Boughton to propose naming the city’s sewage treatment plant after Oliver because it was “full of s***, just like you, John.”

Following Boughton’s threat, Oliver offered up $55,000 in donations to Connecticut charities to help fund a new sign outside the sewage plant. Local businesses ponied up $45,000 for charity as well, and Boughton offered to give tours of the plant for $500 in charitable donations.

Earlier this month, Danbury City Council approved the name change, contingent on Oliver attending the ribbon-cutting in person. As Oliver showed on “Last Week Tonight,” he was happy to do so.

“Yes, I went to Danbury, home of the Danbury Railway Museum, their self-proclaimed World’s Tallest Uncle Sam, and now the single-greatest sewage plant in the continental United States,” Oliver said. “It was even more beautiful than I had imagined.”

Oliver, who arrived for the ribbon-cutting ceremony wearing a ridiculous protective body suit, rubber gloves, and a plastic cube over his head, said a few words after the sign was unveiled.

“There is a reason that this sewer plant means so much to me, and that’s that it represents everything that we need the most right now,” Oliver said. “Because think about it: This place takes the worst that humanity can produce, and transforms it into something that we can live with. And now more than ever, there’s something inspirational in that.

“Because at the end of this awful, awful year, what could be more important than evidence that if we want to, we can come together, overcome our differences, and sort our s*** out,” Oliver continued. “Mr. Mayor, I could not be more proud to have my name on your s*** sorter.” 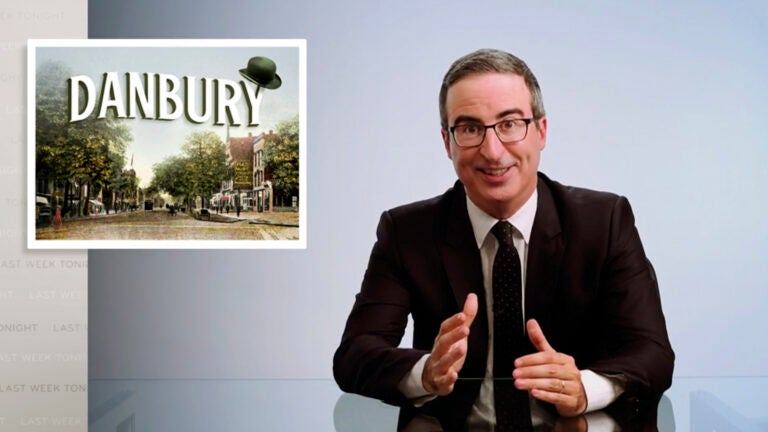