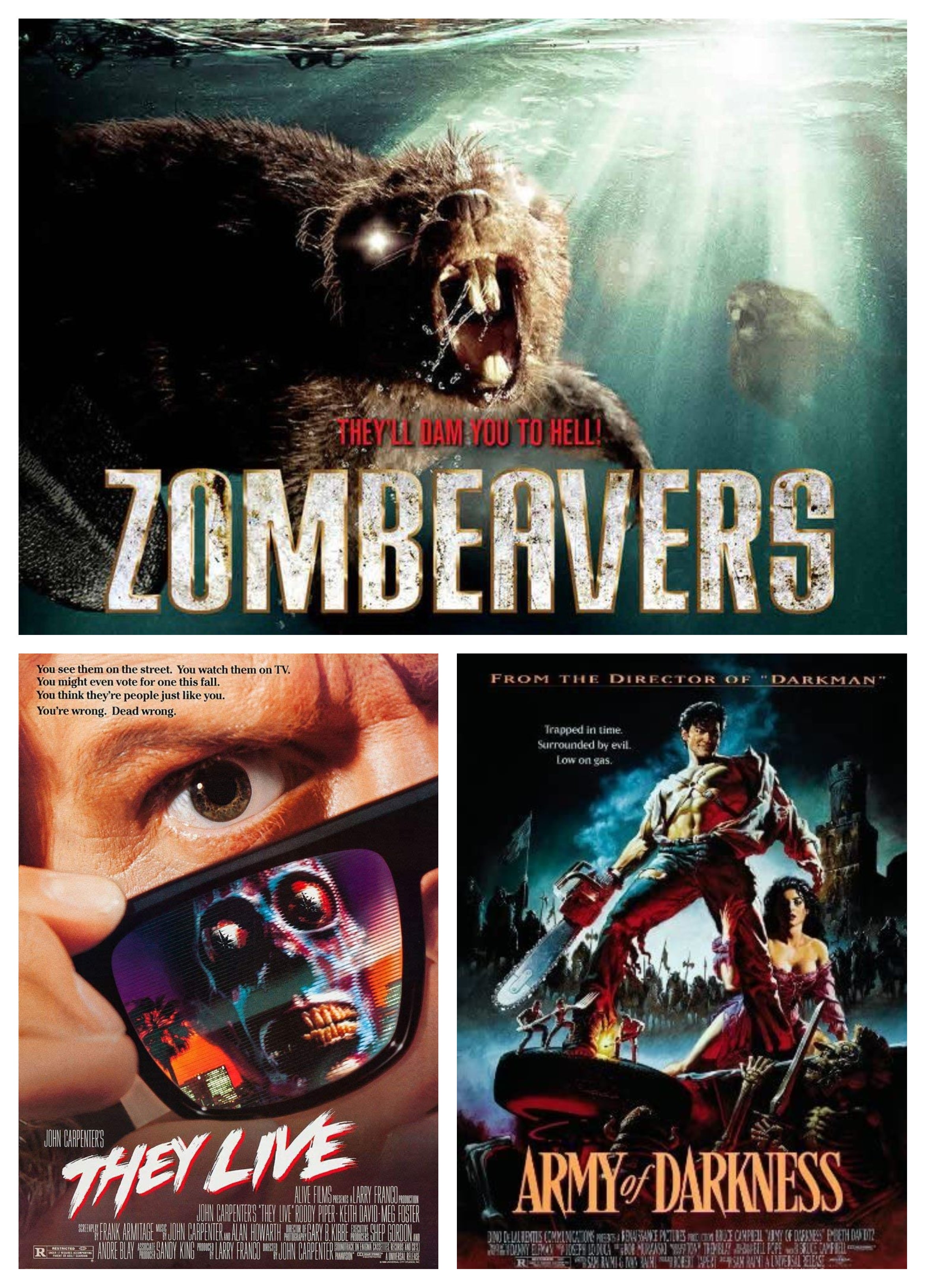 “Zombeavers,” “Army of Darkness” and “They Live” were all mentioned by Boston.com readers.

Let’s face it, nobody wants to watch a bad drama, or a bad romance (apologies to Lady Gaga). But come Halloween time, there’s something appealing about a really bad horror movie — one that makes you groan and scream in equal measure as it spews blood, entrails, and awful dialogue in your general direction.

With that in mind, we asked Boston.com readers to weigh in on their favorite so-bad-they’re-good shlock horror films to screen this Halloween. And boy, did they deliver.

It’s probably no surprise that a good number of these were from the 1980s; gross-out flicks whose entire budgets seem to have been blown on fake blood were practically their own genre at the time. But others run the gamut from 1977’s William Shatner vs. tarantulas classic “Kingdom of the Spiders,” right up through this year’s Salem-set “Hubie Halloween,” Adam Sandler’s aggressively awful Netflix horror comedy.

Here are the five most-recommended responses to our best-worst (worst-best?) Halloween movie poll, and a list of other flicks that readers suggested for your viewing, er, pleasure.

1) “Zombeavers” (2014). For a movie that only came out a few years ago, “Zombeavers” garnered a surprising number of mentions in our poll, suggesting that the cinematic appeal of zombie beavers had been sorely untapped. The movie is apparently about beavers who get exposed to toxic chemicals, turn into zombies, and attack college students, and then they turn into zombies. (Fun fact: Among the beaver bait is Zeke from Disney Channel’s “Zeke and Luther.”) We haven’t seen “Zombeavers,” but our guess is this line from its Wikipedia description tells you everything you need to know: “The rest of the group flee to the house, where they realize the beavers have cut the phone lines.”

2) “Ernest Scared Stupid” (1991). Gather ’round kids, while we tell you the tale of Ernest P. Worrell, the hapless goofball who was seemingly everywhere in the late ’80s and early ’90s but has since inexplicably disappeared from the zeitgeist. This installment was actually the fifth (!) Ernest movie, also known as the one in which Ernest (the late, great Jim Varney) and a group of plucky youngsters battle demonic trolls who turn kids into dolls. It’s the only movie to appear in the results of both our so-bad-it’s-good and our family-friendly Halloween movie polls, so clearly Ernest was on to something. Or on something. One of those two things.

3) “Evil Dead 2” (1987) / “Army of Darkness” (1992). Interestingly, 1981’s “The Evil Dead” got no love in our poll — maybe it was too good to be so-bad-it’s-good? But both the second and third installments of writer/director Sam Raimi’s gruesome horror comedy series made the list of fan favorites. (If you’re keeping track at home, “Evil Dead 2” is the one that tells basically the same story as the first movie but with fewer people, and “Army of Darkness” is the one that takes place in the 1300s and features Mr. Pitt.) These may not be what you’d consider fine cinema, but they did lead to Raimi making the first and still the best “Spider-Man” series, with the Laurence Olivier of Spider-Men, Tobey Maguire. Also worth noting: Bruce Campbell’s Ash Williams was voted “greatest horror movie character ever” in 2013 by Empire magazine, so take that, girl from “The Exorcist”!

4) “Re-Animator” (1985). Maybe the most disgusting movie on this list (and that’s saying something), director Stuart Gordon reportedly used at least 24 gallons of fake blood in this tale of re-animated corpses, severed heads that keep on talking (and doing other, more socially inappropriate things), and at least one living-dead cat. It may be hard to argue that this is actually a bad movie, given it got a positive review from film critic Pauline Kael. (We can’t find it but we’re told it happened.) Also, it introduced a character named Hans Gruber three years before “Die Hard” did, for whatever that’s worth.

5) “They Live” (1988). More science fiction than Halloween horror, John Carpenter’s creepy aliens-among-us opus features professional wrestler Rowdy Roddy Piper declaring, “I have come here to chew bubblegum and kick ass, and I’m all out of bubblegum,” which may be the single greatest movie line ever written. Plus another scene that has Piper and Keith David beating the stuffing out of each other in an alleyway for an interminable 5 1/2 minutes. But mostly, it’s remembered for its vision of a society where we’re being controlled by disguised space aliens and all printed matter carries subliminal messages like “Obey,” “Conform,” and “Watch Television,” which would explain a lot.

Others films mentioned by readers included:

Here’s what some readers had to say about their choices for best-worst Halloween horror movies:

“‘Dead Alive’! Please see the scene where the priest is fighting the undead in the graveyard.” — Anne, Brookline

“‘The Exorcist III,’ with George C. Scott. A very rare third movie in a series that is remarkably better than its [prior] sequel. Scary as hell. See for yourself.” — Andrew, Worcester

“‘Halloween III: Season of the Witch.’ The 1982 flick was chastised when it was originally released for not including their favorite masked maniac, Michael Myers. If it was released without ‘Halloween’ in its title, more people may have appreciated the film: an eerie tale about an evil mask maker who sets out to wreak havoc on America’s children on Halloween night. There are definite plot holes and a few did-that-just-happen moments, but overall, people should give this horror gem a rewatch!” — Fred, Boston

“‘Hellraiser.’ They didn’t notice the dad’s ear was falling off.”

“Not really bad at all but bad and good enough for an enjoyable viewing … ‘Evil Dead 2.’”

“When I was little I saw the movie ‘Spaced Invaders.’ Despite being a mix of fantasy, science-fiction, and Halloween, it is truly a terrible film, which may be why few have heard of it. Yet each year I watch it with my friend, and we both make fun of it, ‘Mystery Science Theater’ style.” — Stacy, Reading 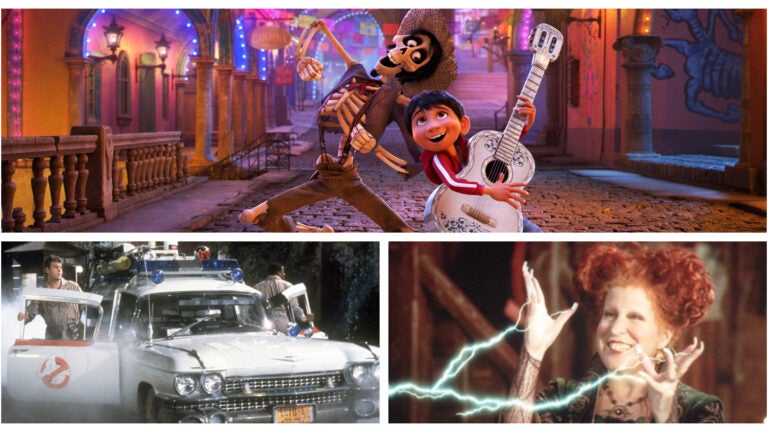