“Saturday Night Live” didn’t have big celebrity cameos to lean on during its Dec. 5 episode, leaving Alec Baldwin and Jim Carrey and their impressions of Donald Trump and Joe Biden on the sidelines.

Instead, the long-running sketch show relied on the comedic chops of host Jason Bateman to drive the episode. The “Arrested Development” star was more than up to the task, playing everything from a concerned dad to a socially distanced mall Santa in one of the better episodes of the season.

While the show still mined plenty of political laughs from the prior week’s election fraud hearings in Michigan, most of the humor came from holiday-themed sketches, as the show’s writers mined comedy gold from the pandemic’s profound effect on our celebrations and traditions.

Here’s a full list of the best moments and standout sketches from last night’s “SNL”.

As a bug-eyed, flatulent Giuliani, Kate McKinnon effectively captured the chaos of this week’s voter fraud hearings, as he introduced “a dozen intelligent, barely intoxicated individuals” as witnesses.

The defense calls Nicole Kidman’s character from The Undoing. pic.twitter.com/IPYSfQcci3

Bateman spent the entirety of his monologue telling a story about how a chimpanzee tried to bite his nose off the last time hosted “SNL” back in 2005. The premise may sounds like a joke, but as an archival clip showed, Bateman was serious.

Bateman plays a father overseeing a sleepover who is trying to find out which tween has utterly destroyed his home while trying to hide a period blood stain. If the thumbnail didn’t tip you off, Kate McKinnon is the culprit, though she goes to great lengths to aggressively deny it.

In my pick for sketch of the night, Santa (Bateman) and his elves (Beck Bennett, Kyle Mooney, Chloe Fineman) are disturbed by a letter to the North Pole from  Stu (Pete Davidson), whose angry prose is a parody of Eminem’s 2000 song “Stan.” Stu quickly moves from “Dear Santa” to “Dear Mr. Holly Jolly Two-Faced Son of a B****” when his first letter requesting a PlayStation 5 is ignored. Eminem himself even makes an appearance in the sketch.

Bowen Yang and Cecily Strong (channeling her inner Liza Minelli) play a pair of lounge singers who remain relentlessly upbeat as they try to adjust their act to an outdoor restaurant setting. Their piano player (Bateman), meanwhile, complains about Yang’s singer attempting to estabish herd immunity in the cabaret world and his keyboard melting under the outdoor heat lamp.

In a sketch that partially functioned as a PSA, “SNL” imagined the Zoom chats that are happening across the nation as adult children call their parents to say they won’t be coming home for Christmas because of the pandemic. The responses are not exactly measured, ranging from “Let’s talk about this when you’ve changed your damn mind” to “If you don’t love me Marie, just say so.”

Musical guest Morgan Wallen was originally supposed to perform on “SNL” back in October, but was disinvited when photos of him at a party emerged. In the sketch, the country singer (playing himself) is about to engage in a night of crazy partying at the University of Alabama before his time-traveling self (Bateman) comes back to stop him.

Two months ago at The University of Alabama… pic.twitter.com/IVkNMUoLUf

As is often the case, the final sketch of the night was reserved for Kyle Mooney’s oddball brand of humor, which he and Beck Bennett honed in their college sketch group Good Neighbor. The premise of this one is that Mooney’s character is terrible at telling jokes, constantly “ruining bits” that his friends are enjoying with his ill-timed, forced punchlines. I’m a huge Mooney fan, but recognizing he isn’t for everyone, 12:55 a.m. is the perfect time slot for his quirky comedic stylings. 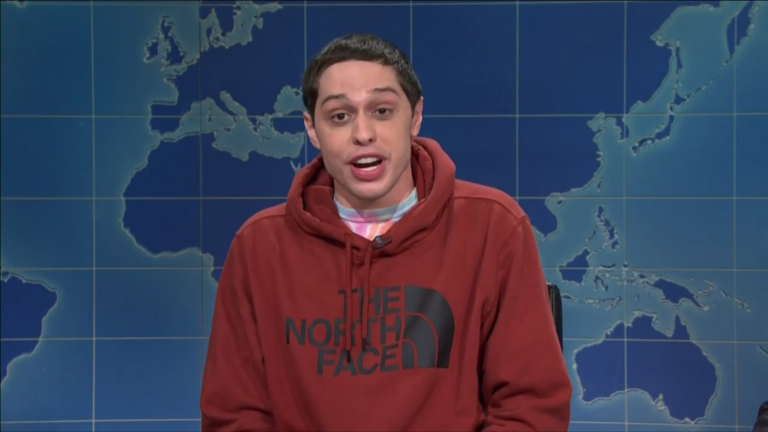