Nearly three months into production, Netflix is as busy as ever filming “Don’t Look Up.”

In the past few weeks, the star-studded satire has been filming all over Massachusetts, with crews visiting Boston, Brockton, Framingham, and Westborough.

On Wednesday, crews filmed in Framingham, with Jennifer Lawrence (“The Hunger Games”) and Ron Perlman (“Hellboy”) shooting scenes in the same town where crews were first spotted filming establishing shots sans actors way back in mid-November.

In the film directed by Adam McKay (“The Big Short”), Lawrence and Leonardo DiCaprio (“The Departed”) play astronomers who discover an asteroid that will soon destroy the planet. As they embark on a media tour to inform the world of its impending demise, they are met with ignorance, indifference, and resistance from politicians and the public.

Despite the massive snowfall earlier in the week, crews in Framingham added even more fake snow to the proceedings, and used a blower to simulate snowy weather. 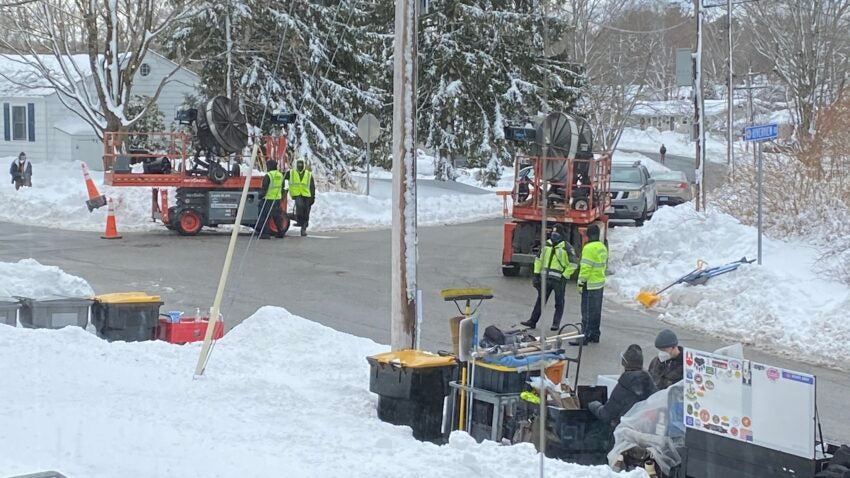 Crews set up giant fans to simulate snowfall while filming “Don’t Look Up” in Framingham on Wednesday.

Alex Ludwig, who lives next door to the filming location, said that Netflix first approached his neighbor for filming permission last fall, and informed residents about the exact filming date two weeks ago.

Ludwig chronicled the production on Twitter, noting that everyone involved was wearing masks and some were wearing face shields while on set.

Crews also assembled at the westbound service plaza along the Mass Pike in Framingham before briefly using a section of the highway to film a scene, according to WCVB.

Also on Wednesday, crews began setting up to film in Brockton on Thursday night, with the Brockton Enterprise reporting that crews transformed a former D’Angelo’s Grilled Sandwiches location on Montello Street into a fictional restaurant called “Burger Crown.” On Thursday evening, Lawrence and Timothee Chalamet (“Little Women”) filmed scenes on the roof of the restaurant, staring up at the sky during one take.

#JenniferLawrence on the roof getting ready to shoot a scene for the upcoming movie #DontLookUp also starring @LeoDiCaprio And our shop has a front row view of it all. @netflix @TMZ #movies #film pic.twitter.com/3uEGjLzoDF

Enterprise photos showed walls in downtown Brockton plastered with signs featuring the slogan “Just Look Up” a seeming counterbalance to the “Don’t Look Up” slogan chanted by a crowd during a scene filmed in Boston in December featuring Matthew Perry (“Friends”) and Jonah Hill (“Superbad”).

Throughout the nine weeks of filming, much of the production for “Don’t Look Up” has been based in Boston, and filming continued in the Back Bay last month. The Fairmont Copley Plaza served as a primary location over the course of three days in late January, with DiCaprio, Cate Blanchett (“Carol”), and Tyler Perry (“Gone Girl”) among the stars filming scenes.

The hotel stood in for the fictional Washington D.C. hotel The Buchanan during filming. It hosted both indoor and outdoor scenes, including a scene in which Blanchett and DiCaprio are hounded by paparazzi.

The ⁦@FairmontCopley⁩ was changed to The Buchanan (Boston standing in for DC) today for the Netflix movie Don’t Look Up filming! We hear Cori Copley will not make a cameo! pic.twitter.com/rkgIF6SpuW

A source familiar with the production confirmed that “Don’t Look Up” is on schedule to finish filming in mid-February. Several stars including Rob Morgan (“Mudbound”) and singer Ariana Grande have already completed filming.

In addition to the above listed towns, “Don’t Look Up” has also filmed in Canton, Chicopee, Fall River, Norton, Salisbury, Weymouth, and Worcester.

“Don’t Look Up” will debut on Netflix later this year, though an exact release date has not been announced.