It’s time to say goodbye to Leo, J-Law, Ari, Timmy, Meryl, and the rest of the “Don’t Look Up” cast.

The star-studded Netflix movie, which has been filming in Massachusetts since November, officially wraps principal photography this week, according to three sources familiar with the production.

Thursday marked the final day of filming for the cast, which took place for the second straight day at Red Sky Studios in Allston.

The end of principal photography means stars like Leonardo DiCaprio, Jennifer Lawrence, and the rest of the on-camera talent will officially be done Thursday, though there remains the possibility of film crews revisiting locations for pick-ups — short, minor footage sans cast filmed to augment what’s already been shot — before moving into post-production.

Directed by Adam McKay (“The Big Short”), “Don’t Look Up” stars Lawrence and Leonardo DiCaprio as a pair of astronomers who discover a comet that will soon destroy the planet. As they embark on a media tour to inform the world of its impending demise, they are met with ignorance, indifference, and resistance from politicians and the public.

In an emailed statement to Boston.com, McKay thanked the city of Boston for supporting the movie, calling the pandemic-era production his “most challenging film experience” ever.

“This was the strangest and most challenging film experience I’ve ever had,” McKay said. “And thanks in no small part to the gracious support Boston gave us, we were able to pull it off. The really good pizza didn’t hurt either. I wish Marcus Smart’s calf the best.”

News about the massive cast continued to surface until almost the very end of the production, with Lowell native Michael Chiklis (“The Shield”), Mark Rylance (“Bridge of Spies”) the most recently confirmed actors in the movie last week.

Production of “Don’t Look Up” was front and center during the three months it was in Massachusetts, drawing out fans during many of its 62 days of production.

Among the most noteworthy moments to take place in Boston: DiCaprio and Lawrence filming in front of dozens of fans at South Station; Hill and Matthew Perry being booed and pelted with objects while filming a rally scene in front of the Museum of Fine Arts; filmmakers transforming the Financial District into New York City for scenes with DiCaprio, Lawrence, and Sisley; a flame-filled riot scene with DiCaprio, Lawrence, and Morgan filmed downtown at Howl at the Moon; and scenes with DiCaprio, Blanchett, and Tyler Perry filmed at the Fairmont Copley in the Back Bay, including ones featuring a paparazzi mob and a fist fight.

Other notable production moments across the state included a large fireworks display set off for a scene with DiCaprio, Lawrence, and Meryl Streep filmed on the Battleship Massachusetts in Fall River; filmmakers briefly slowing traffic on the Mass. Pike for a driving scene with DiCaprio, Lawrence, and Chalamet in Framingham; and Lawrence and Chalamet locking lips while filming in Brockton, where Lawrence was also injured on set.

“Don’t Look Up” will debut on Netflix later this year, though an exact release date has not been announced. 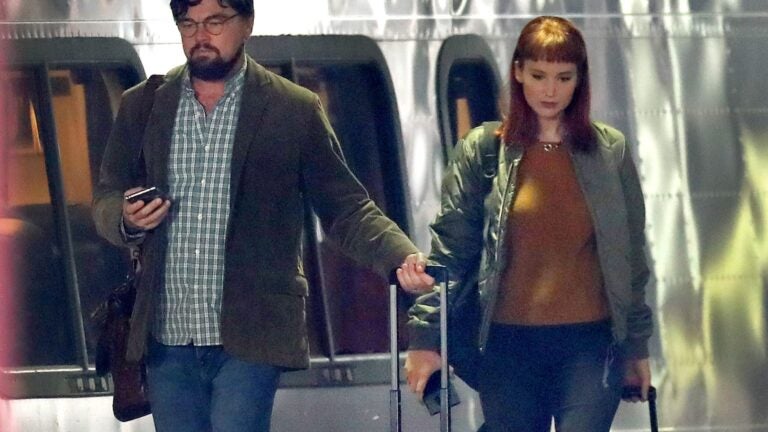 ‘Don’t Look Up’ continues to film all over Massachusetts. Here’s the latest on the Netflix blockbuster.