NEW YORK (AP) — Doja Cat went for neon feathers and a moto-inspired look zipped allll the way down and Cynthia Erivo stunned in a sparkling silver gown with gold accents by Louis Vuitton at the Grammys as music’s big night Sunday offered a luxe fashion moment for the stars. 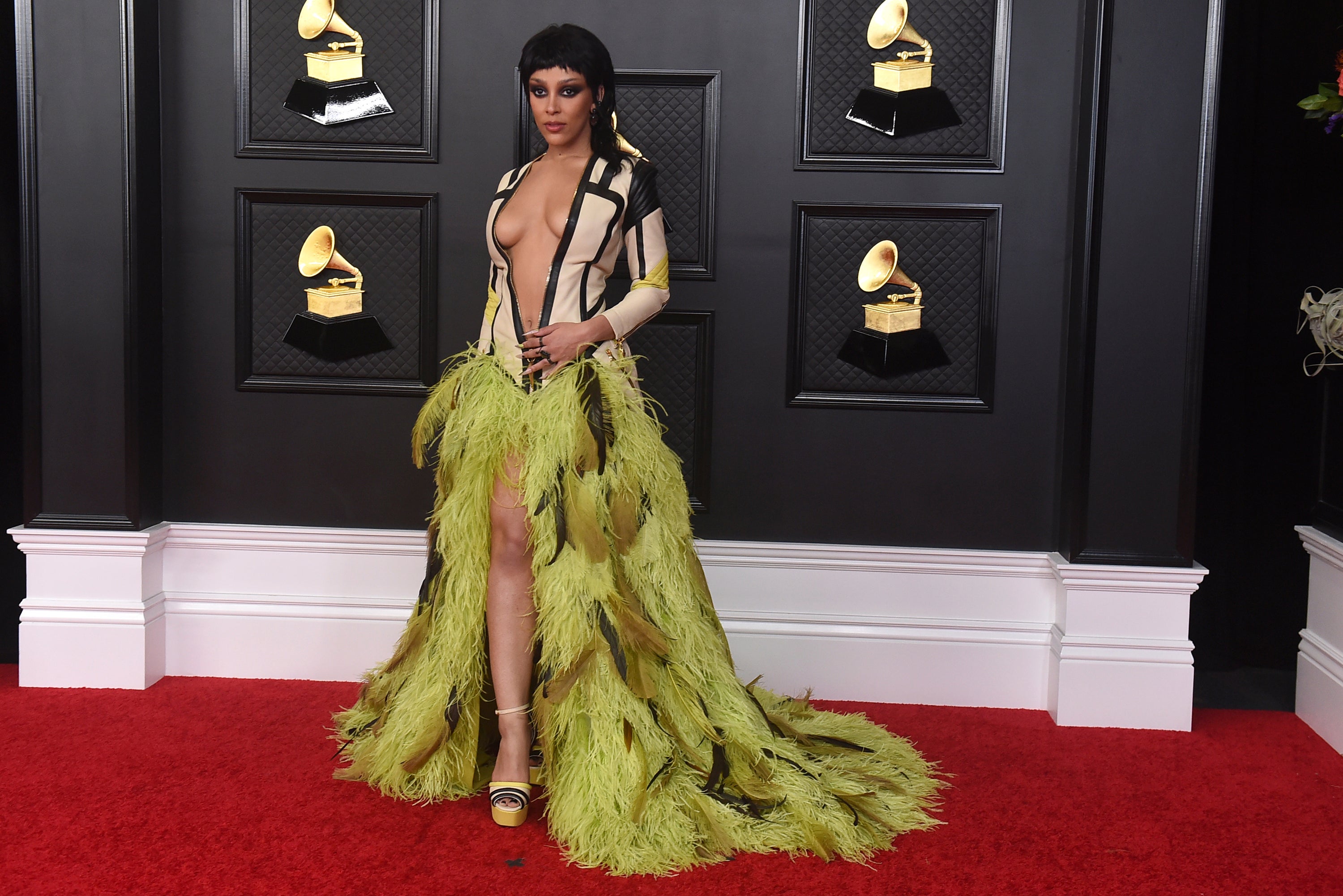 Cynthia Erivo with ANOTHER top toot of the evening, wearing custom Louis Vuitton at the #Grammys. pic.twitter.com/MOtXwy0nKs

Erivo’s gown included a low cutout at the front with a gold bib effect at the top and a gold belt, while DaBaby brightened up a drastically pared-down red carpet in a bright mustard and green floral suit from Dolce & Gabbana. Erivo didn’t hit the carpet, but she made a statement nevertheless. Her gown was adorned with more than 60,000 glass beads, crystals and sequins. She topped off the look with jewels from Tiffany & Co. 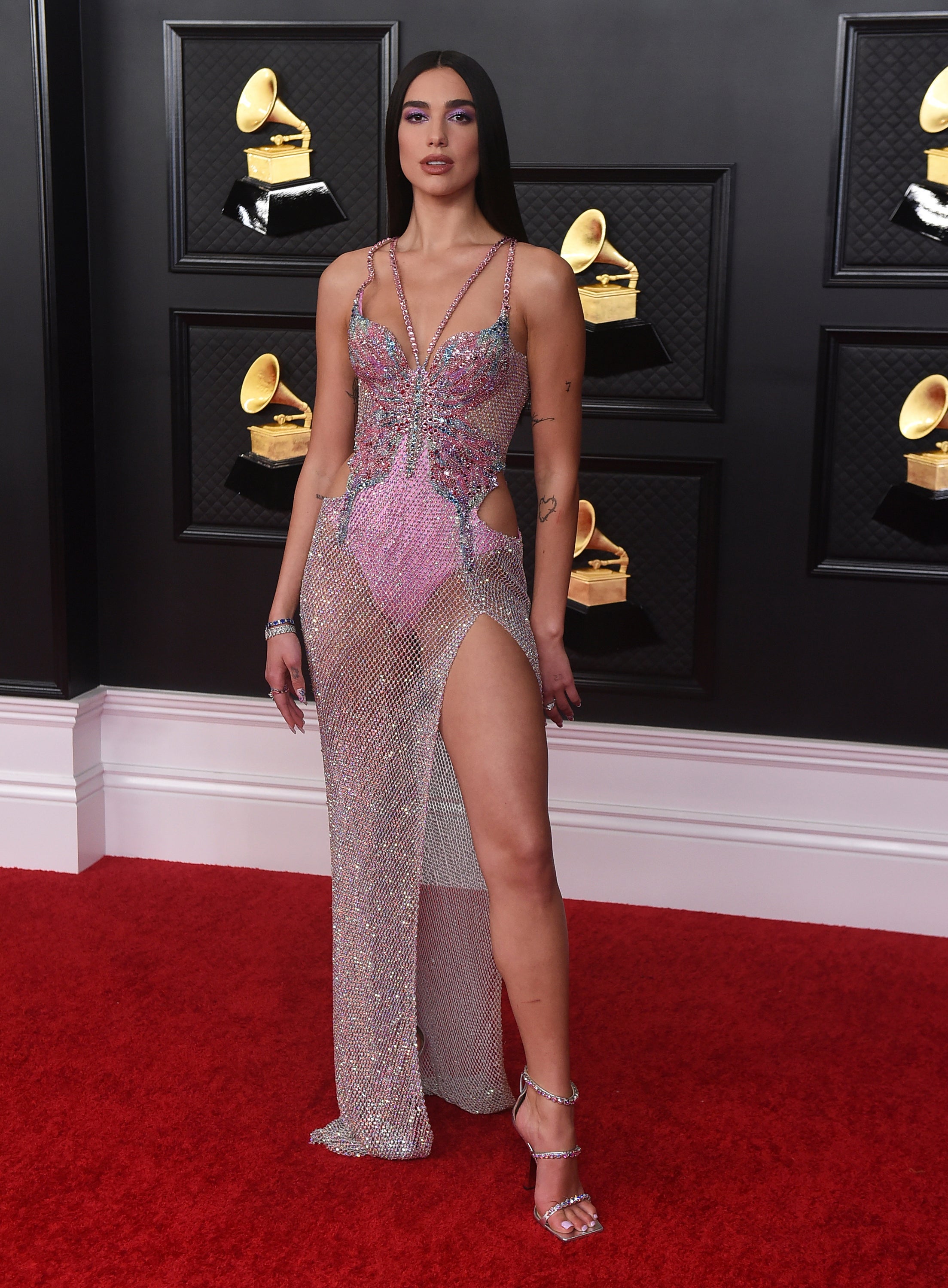 Dua Lipa also sparkled, in a pink sequin Versace gown with a butterfly motif. The body-skimming gown included cutouts at the hips and a sexy high slit.

“It was really cool to collaborate,” she said of the look. 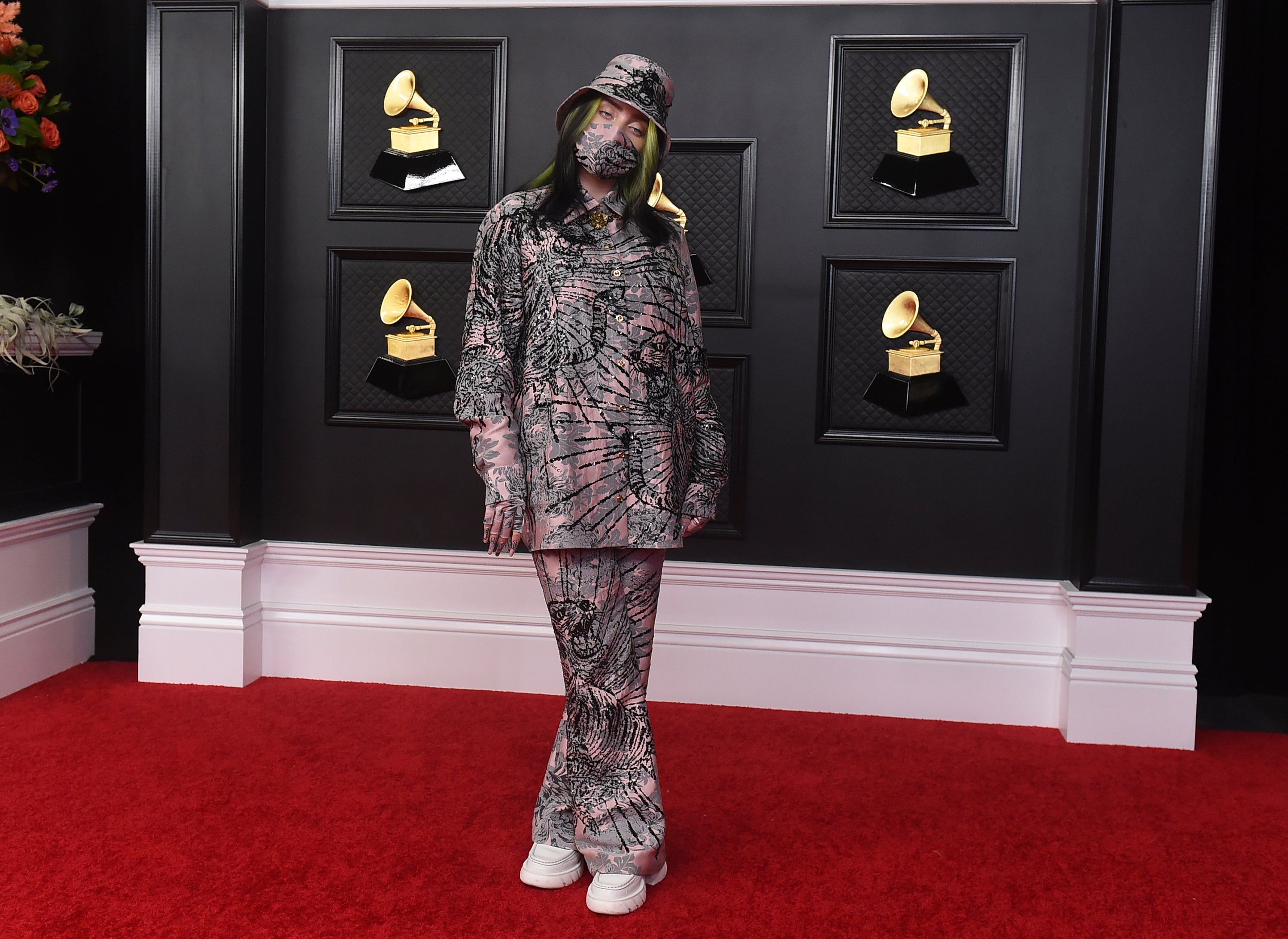 Billie Eilish matched her long nails to a loose pink and black trouser look by Gucci, her hat and face mask also a match. 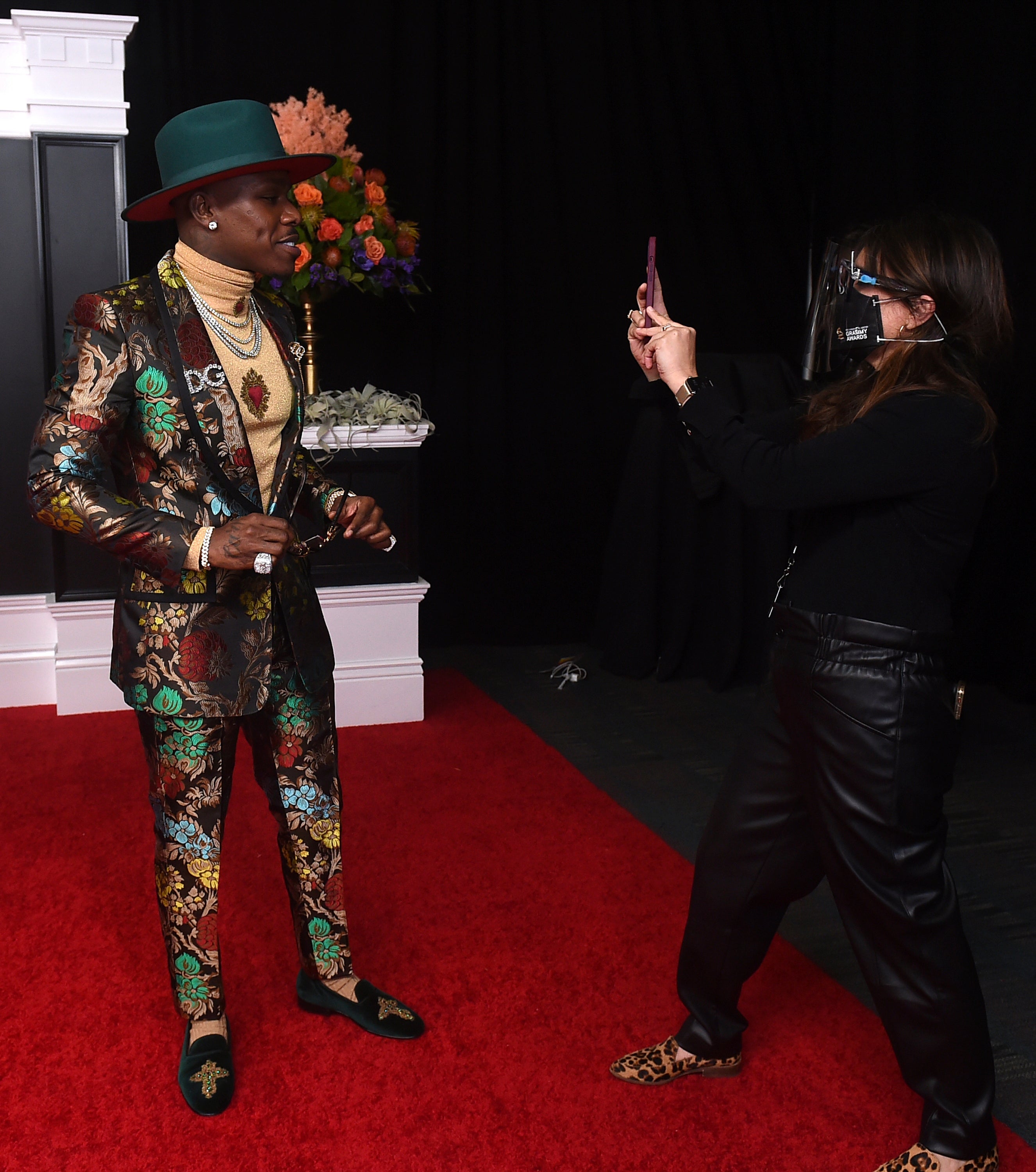 DaBaby poses for a photo as he arrives at the 63rd annual Grammy Awards at the Los Angeles Convention Center.

DaBaby, his mom, Linda, by his side in red, topped off his suit with a wide-brim green hat with red underneath. He was on hand in person but earlier created an Instagram red carpet moment with his daughter since no kids were allowed at the Los Angeles show.

DaBaby brought his mom as his #GRAMMYs date ❤️ pic.twitter.com/mU4QONByAr

Joanie Leeds, winner of the best children’s music album, did something similar at a distance from home in New York.

“I actually created a step and repeat and a red carpet,” she told reporters during a virtual news conference before the show. “We all walked the red carpet and we had a photographer here and took some really good pictures.”

Leeds wore a multicolor sequined gown by Nicole Miller, and she slid off her silver heels to show on camera.

“Just because we’re virtual this year, I wasn’t going to wear my hoodie sweatshirt,” said Leeds, a first-time Grammy winner.

Due to pandemic precautions, the “red carpet” was not the usual mass of cameras and TV crews. A select few outlets were permitted on site to conduct live interviews — a safe distance apart. 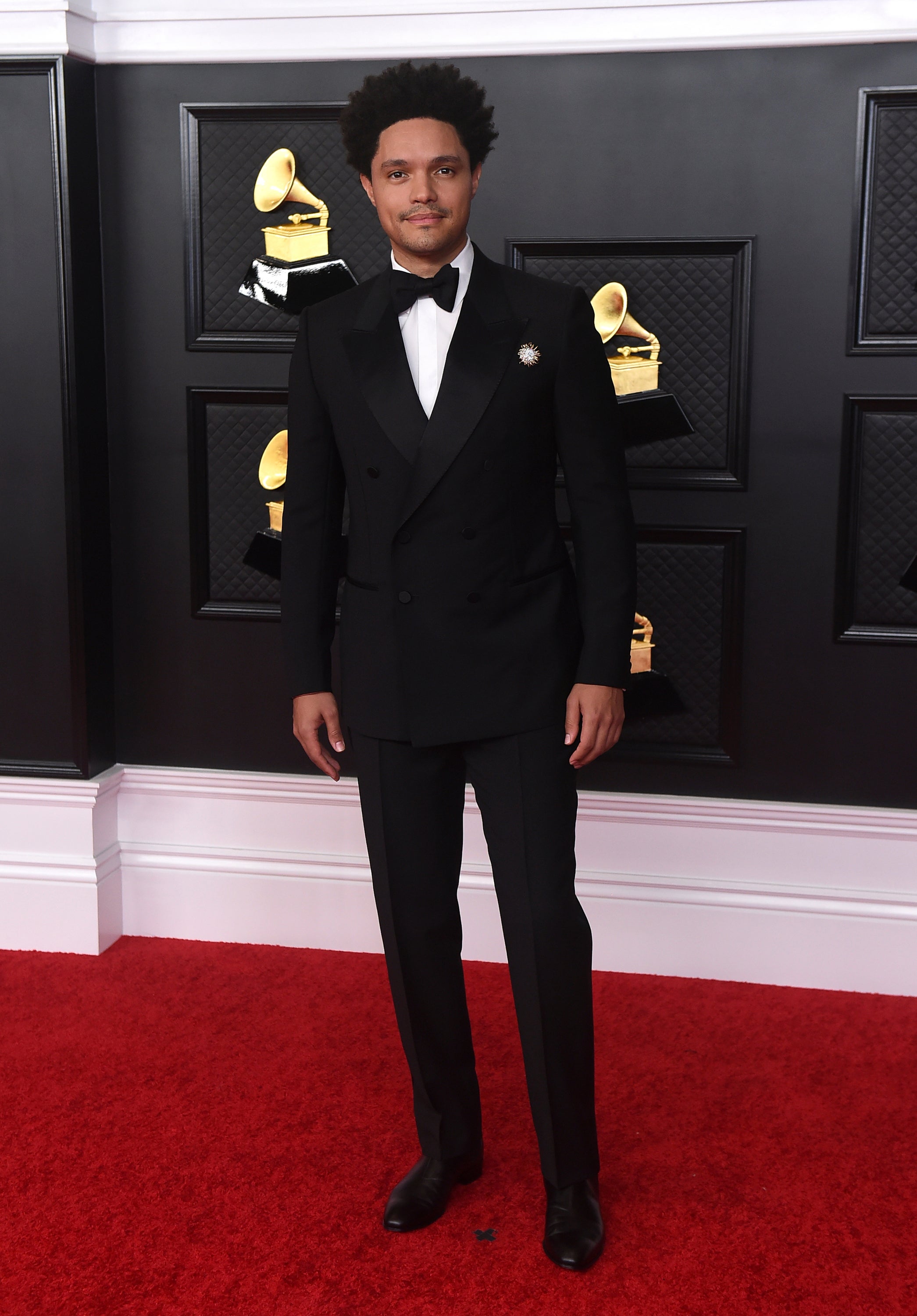 The night’s host, Trevor Noah, showed up for the pared-down carpet in a classic black tuxedo by Gucci, while nominee Debi Nova went big — and pink — in a mini dress that had a huge train and tropical details, by Georges Chakra. 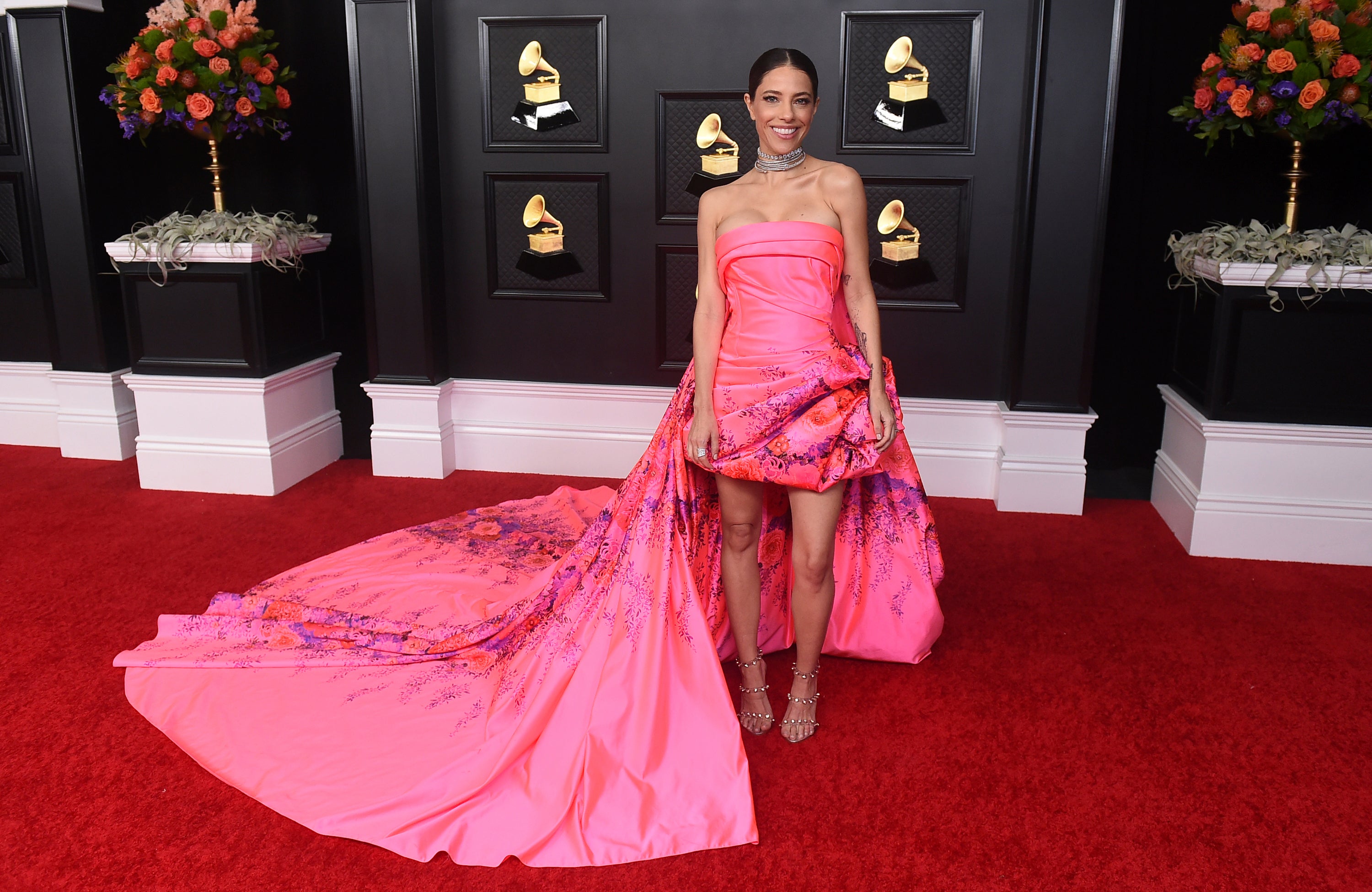 Phoebe Bridgers wore a black gown adorned with a beaded human skeleton, from Thom Browne, and Megan Thee Stallion wore a strapless bright orange princess look with a high side slit and a huge back bow and train by Dolce & Gabbana. Her Chopard choker finished off the look. 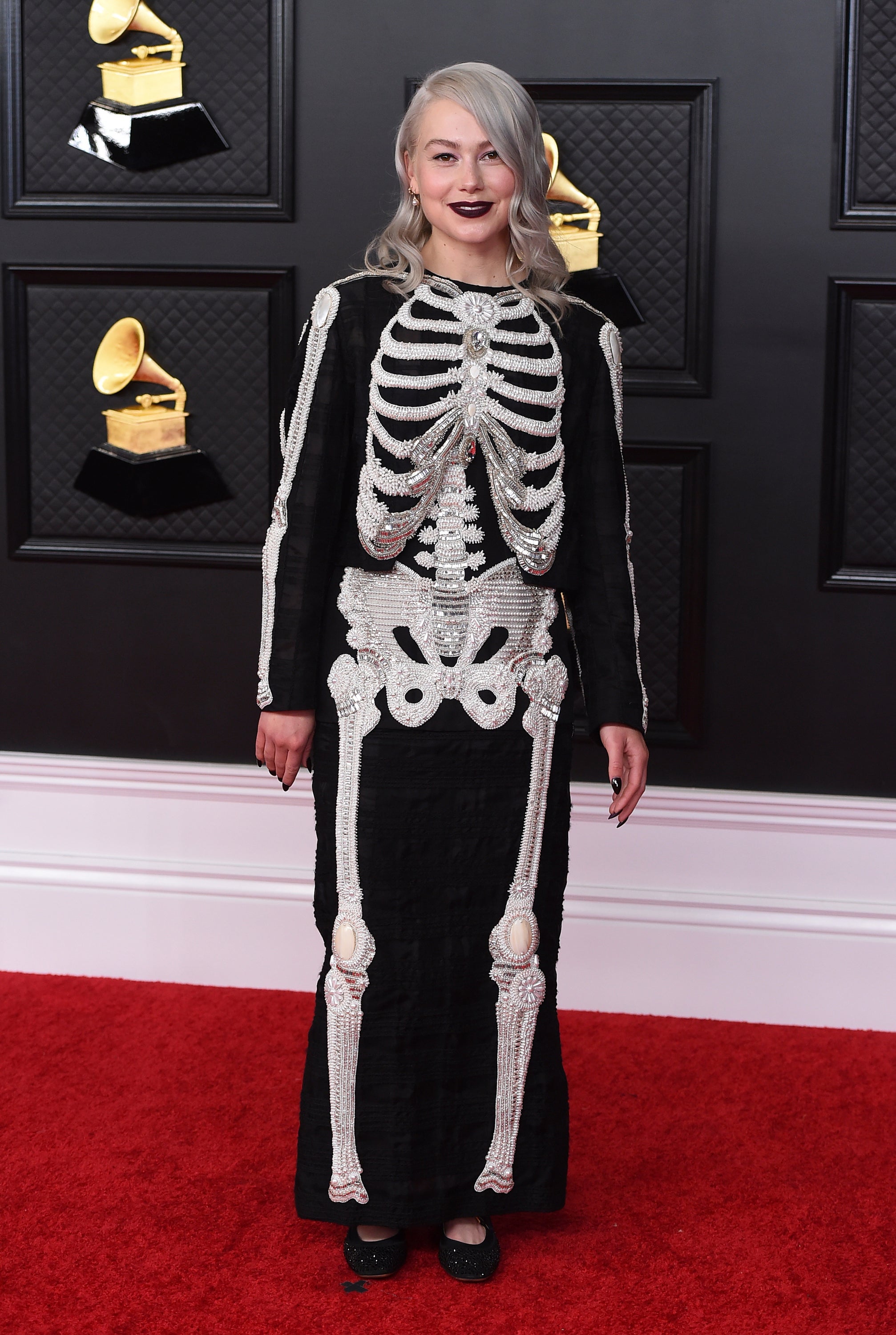 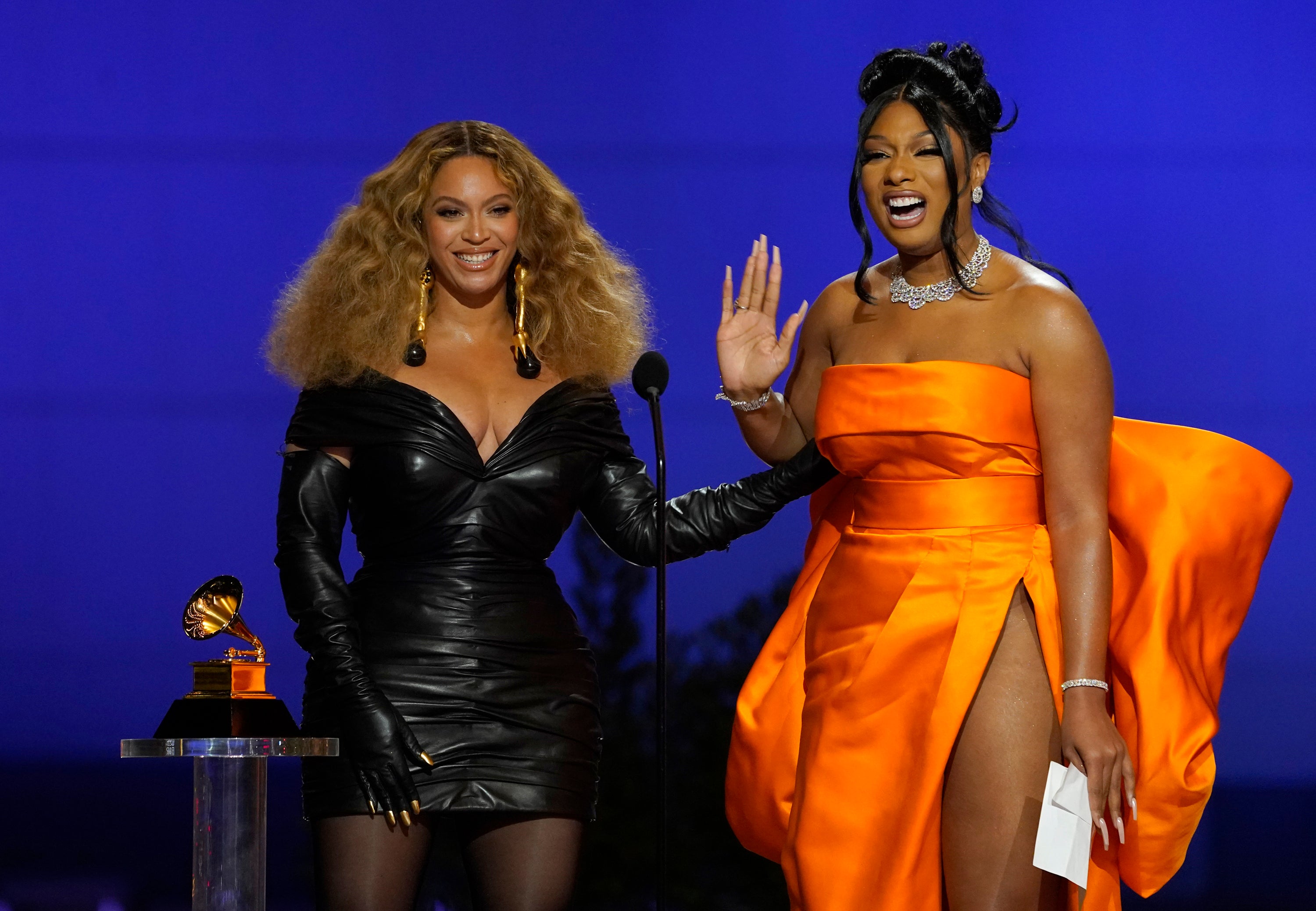 “I’m eager to see D&G work more with hip-hop artists. Megan looked so regal in her orange gown, and tonight she wore her outfit effortlessly. I hope to see her in couture more often. She wears it very well,” she said.

Howard also offered kudos to Lizzo, who shimmered in a pink mermaid look to present an award and earlier wore a short ruched sea foam strapless dress by Balmain. She dripped in Bulgari jewels. 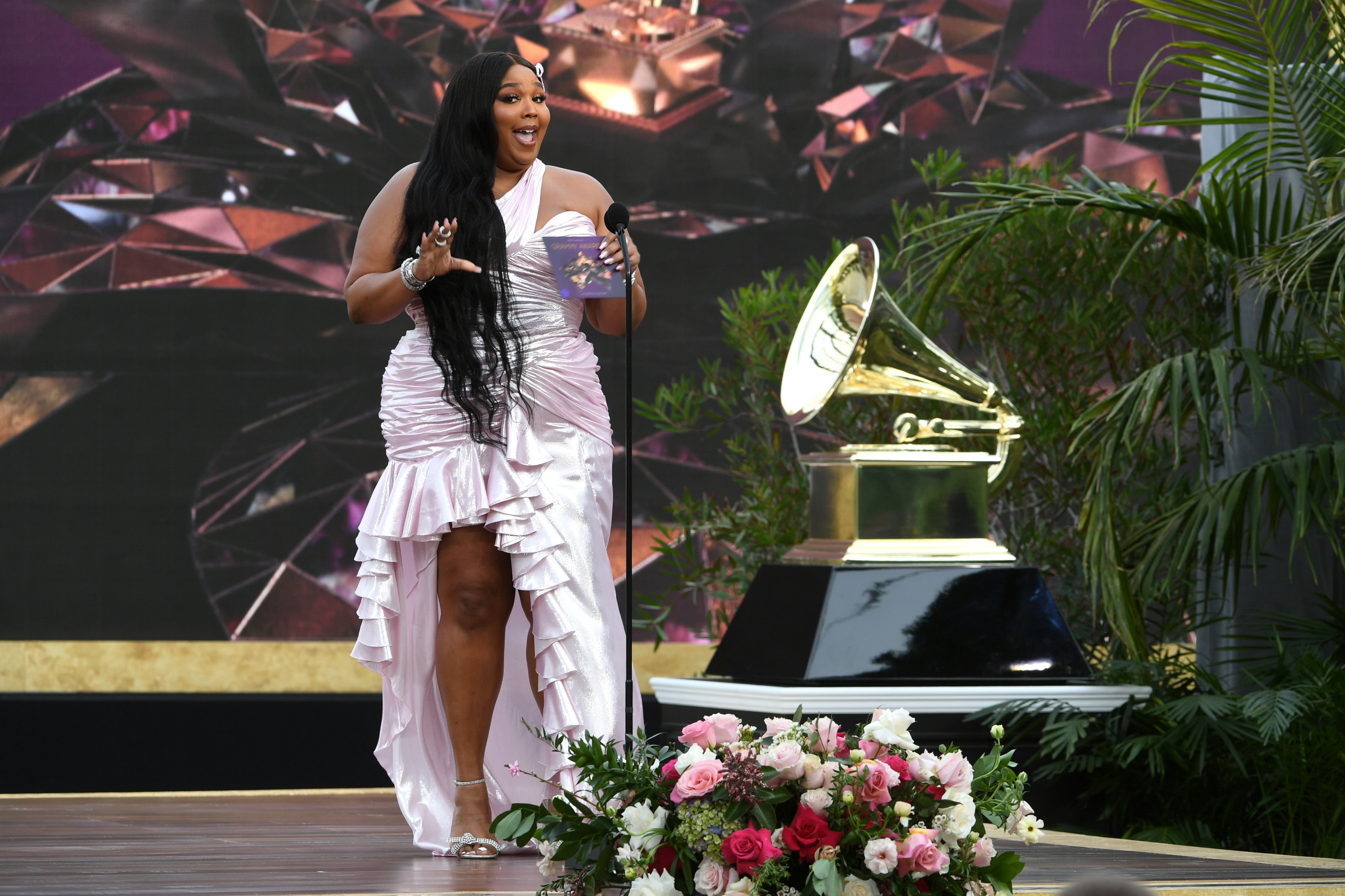 “We normally see avant-garde gowns at the Grammys, but leave it up to Lizzo to switch it up in the best way,” Howard said.

Jacob Collier said he went for comfort in a floral Stella McCartney turtleneck and red suit.

“I’ve never been asked about clothes before,” he said. “I feel like a rock star.”

“Big lapels and flared trousers might, I’ll admit, sound a little intimidating, or like a return to the bad old days, but when you see the way guys like Anderson .Paak, Finneas and Harry Styles are wearing it, it feels fresh,” he said.

All three wore Gucci. Evans said of Styles’ look: “A jacket with a pattern that looks like it could be one of your grandmother’s favorite tea cozies is one thing, but a cropped jacket with a gigantic lapel that channels Nana? That’s the kind of thing that Styles seems to make wearable.”

Styles later performed in a black leather suit — who needs a shirt — with a green boa around his neck. He wore a purple boa with his cropped jacket. 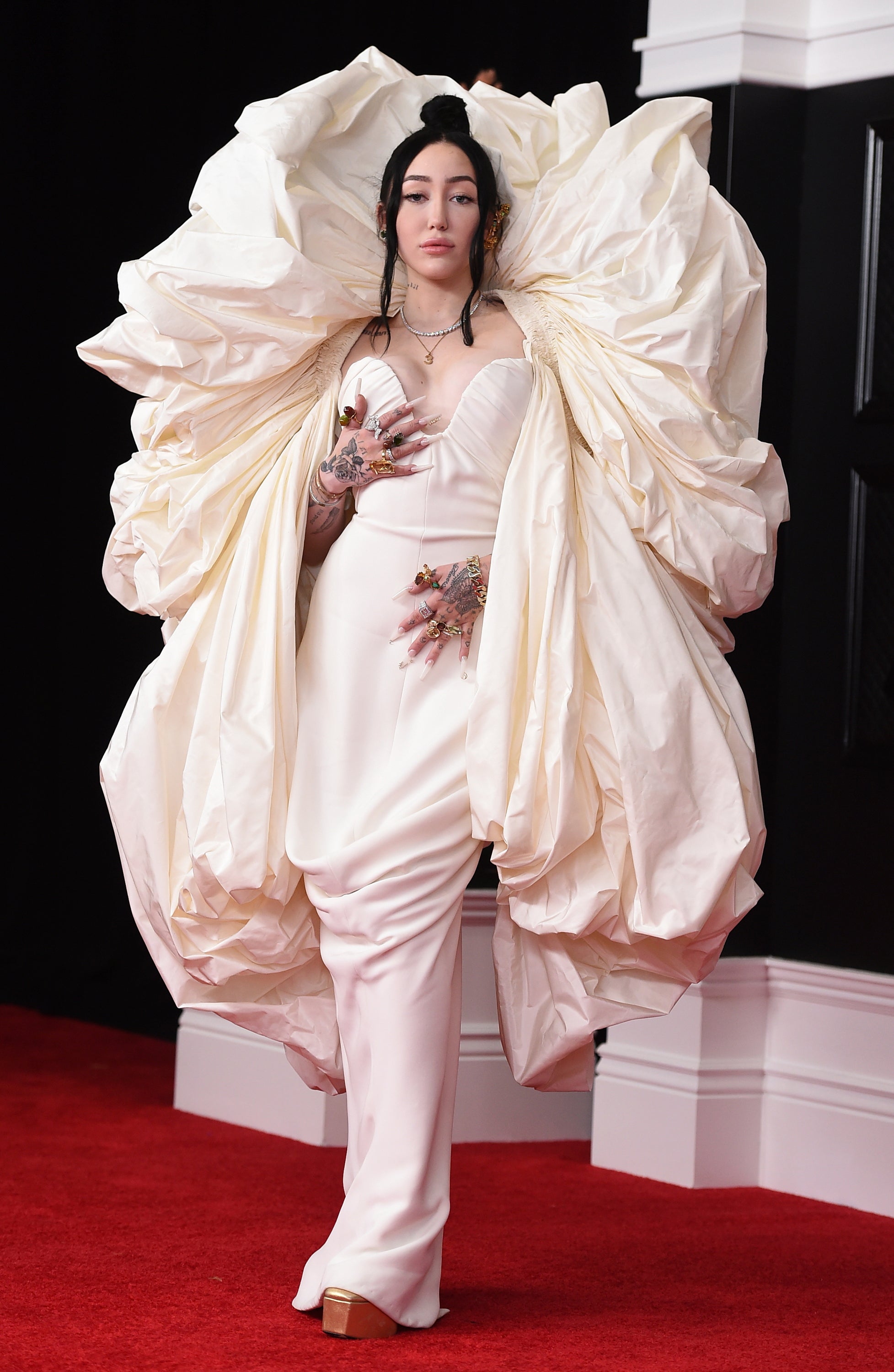 Noah Cyrus spoke to reporters in a cream gown with a huge cape-like effect that encircled her face. It was a Schiaparelli, a somber Cyrus and first-time Grammy nominee said. She said she was honored to be the first to wear it. Cyrus is mourning the recent death of her grandmother.

“I just wish my grandma could have seen this,” she said of her nomination.

Associated Press reporters Marcela Isaza and Jonathan Landrum in Los Angeles and Kristin Hall in Nashville contributed to this story. 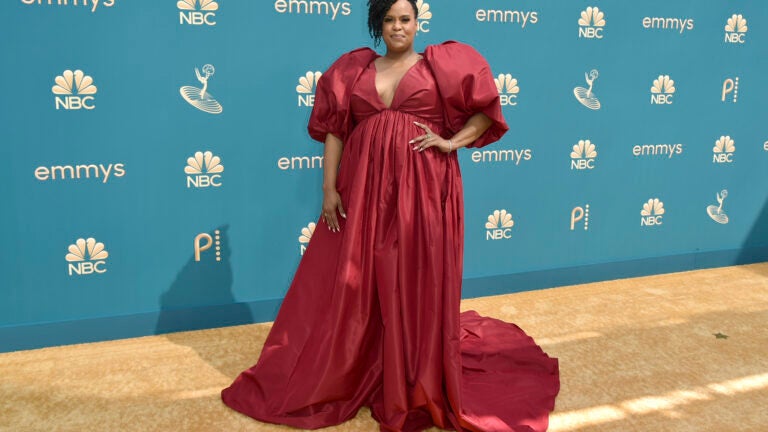