Four local singers made it through the first part of Hollywood Week on “American Idol,” where those who advanced past the initial round — auditions in front of the judges Katy Perry, Lionel Richie, and Luke Bryan — compete to become finalists.

Sunday night brought the Genre Challenge, where performers sing in groups representing their particular music style. Singers chose their own genre and song and were evaluated among others in the same genre.

The next part of Hollywood Week, the Duet Challenge, will air Monday at 8 p.m. on ABC. Hopeful idols will perform in pairs with others who made it through the Genre Challenge — but in a change from last season, the duos will be picked by the judges, not the contestants.

Could Massachusetts see its first “American Idol” winner after 19 seasons? Check out the prospects below:

Berklee College of Music student Grace Kinstler, 20, stood out among her fellow soul singers with a soaring rendition of “10 Seconds” by Jazmine Sullivan.

“Back in the day, if you were just Black, you were called ‘soul,'” Lionel Richie remarked to the other judges. “And I kept telling them, ‘No, soul is not a color, y’all.”

(Sure, as her lower third reveals, Kinstler is actually from Chicago… but if you’re studying at Berklee, we’ll happily count you as a Bostonian.)

“I’ve struggled a little bit with confidence,” Kinstler said on the program. “Growing up, I always saw singers and artists, and I didn’t fit the mold. Like, I’m not super thin, but that doesn’t mean I’m not capable.”

The Berklee student could be a favorite in the competition. Her first round audition, which closed out the season premiere, has garnered 3.4 million views on YouTube and is the third most viewed audition this year. (It’s very close — second place only eclipses Kinstler by about 40,000 views, and first is the daughter of a particularly controversial member of the Trump administration. Yes, Kellyanne Conway had an unfortunate extended cameo in Sunday’s episode.)

While Kinstler left Luke Bryan in tears during her audition, he wasn’t as impressed with Boxford resident Colin Jamieson’s first go in front of the judges. But that changed during the Genre Challenge with the 22-year-old’s spirited cover of “Sex on Fire” by Kings of Leon in the pop group.

“That’s special,” Bryan said to the other judges.

Jamieson said he was worried that his performance “felt rough around the edges,” but the judges were satisfied enough with the performer to push him through the next round.

“I’m here because it’s what I’ve wanted to do. Ever since I was a kid, I’ve always wanted to have to have my own legacy as a musician and leave a story,” Jamieson said on the program.

Berklee grad and Brighton resident Beane — real name Brennan Hepler, but “Beane is easier to remember” — wanted to show a different side of himself after his charming audition drew comparisons to a certain beloved figure in children’s television.

“My audition was so smile-y, the Mr. Rogers comparison, yada yada yada. That is a part of who I am, but us human beings are complex,” Beane recently told Boston.com. “So I thought, let me show them something else that they’re not gonna expect at all.”

The 23-year-old Club Passim server stuck the landing with a vivacious version of “Bennie and the Jets” by Elton John as one of only nine singers in the rock group. He left the judges smiling, including Luke Bryan, who gave him a “no” in the first round.

“Sometimes it comes in the disguise of Mr. Rogers,” Katy Perry said.

Lynn high schooler Amanda Mena, 18, didn’t get a full segment of her own Sunday, but the “America’s Got Talent” semifinalist was shown making it through the genre challenge during a montage near the end of the episode. Mena sang in the R&B group with a rendition of “Spirit” by Beyoncé.

“Growing up, ‘American Idol’ was close to my heart,” Mena recently told Boston.com. “It’s a program I’ve been watching since I was started singing.”

By the way, if you haven’t felt old in a bit: Mena was born about a month after the first ever episode of ‘American Idol’ aired. 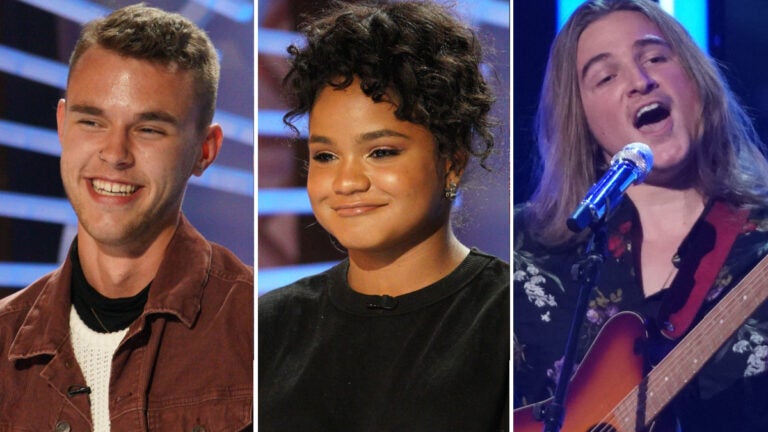 5 local musicians are competing on ‘American Idol’ this season. Here’s everything you need to know about them.