In the pilot episode of Showtime’s 1990s Boston crime drama “City on a Hill,” the ambitious new Assistant District Attorney DeCourcy Ward (Aldis Hodge, “Hidden Figures”) expresses frustration at the hindrances and hidden levels of bureaucracy he faces from the get-go.

A Brooklyn transplant who’s new to Boston, DeCourcy tells his wife, defense attorney Siobhan Quays (Lauren E. Banks, “Maniac”), that it shouldn’t be so difficult for him to put away the bad guys and help the good guys. Siobhan, who grew up in Cambridge, knows better.

‘That’s not the way things are,” Siobhan tells him.

Season 2 of the series, which stars Hodge opposite renegade FBI agent Jackie Rohr (Kevin Bacon, “Footloose”) debuted on Sunday. This time around, the show’s focus has shifted from a gang of armored car robbers in Charlestown to a troubled housing project in Roxbury, where the death of an 11-year-old girl from a stray bullet acts as a catalyst for community action. The show also continues to tell the story of the Boston TenPoint Coalition, a broad group of faith-based leaders, community organizers, and elected representatives that helped to curtail violent crime in the ‘90s and continues similar work today.

Season 2 also marks an increased role for Banks, who landed her role as Siobhan shortly after graduating from Yale Drama School in 2017. In Season 1, she often tempered her husband’s expectations, teaching him to move within the system. But in season two, Banks said that her character begins to take action.

“In Season 2, Siobhan is dissatisfied and discontent with the world around her. She’s looking to start a family, and is considering the world she might be bringing a child into,” Banks told Boston.com. “She calls on lawmakers to make changes, but she also looks at herself in the mirror and says, ‘What am I doing? And what can I do?’”

In a conversation with Boston.com, Banks discussed her character’s evolution in Season 2, how the pandemic impacted filming of the series in Boston, and the modern-day parallels she sees between 1990s Boston portrayed on the show and the current socio-political climate.

This interview has been condensed and edited for length and clarity. 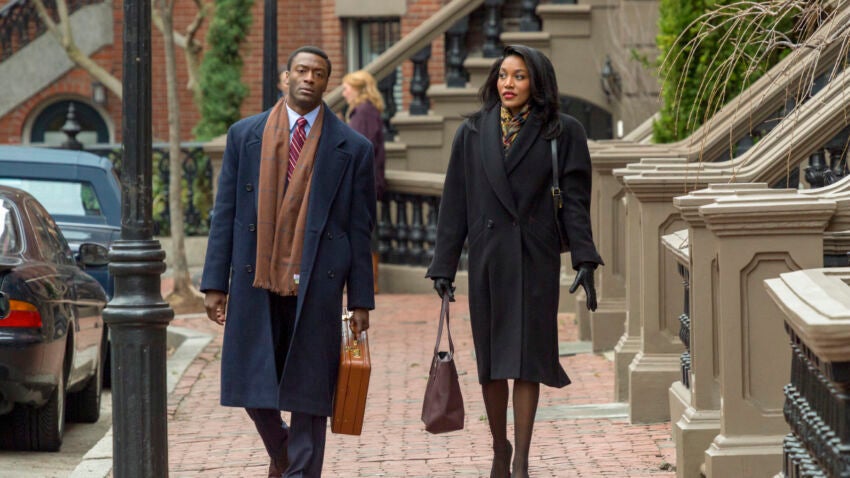 Aldis Hodge as Decourcy Ward and Lauren E. Banks as Siobhan Quays in “City on a Hill.”

Siobhan is more directly involved in the primary story right off the bat in Season 2 compared with Season 1. How would you describe some of the ways her role differs from or builds upon Season 1?

Siobhan’s role is a building block, a stepping stone from Season 1. I think things change for her as she gets more naturally confident in her skills.

There’s a turning point for her in season 1, when they’re in the church, and there’s a horrific shooting. She becomes very involved in the Genesis Coalition, which is representative of the actual historic TenPoint Coalition in Boston that cleaned up crime in the ’90s.

That work is auxiliary to Siobhan’s career in Season 1, but in Season 2, she’s fully invested.

Siobhan is dissatisfied and discontent with the world around her. She’s looking to start a family, and is considering the world she might be bringing a child into. She calls on lawmakers to make changes, but she also looks at herself in the mirror and says, “What am I doing? And what can I do?”

What sort of research into Boston’s past and present did you do while preparing for this role?

I’d never been to Boston before we’d shot the pilot, so I had a lot of ground to cover to play somebody who was from Boston. Well, she’s from Cambridge — and even understanding that difference was part of that. “Oh, you’re not from Boston, you’re from Cambridge!”

I shot the pilot in Boston in 2017, and once the show was picked up, I spent time in all of the various neighborhoods, from Roxbury to Dorchester to Jamaica Plain. I went to church in the area, spent time with folks, including one of the founding members of the Boston TenPoint Coalition, Jeffrey Brown. We talked about the church shooting incident, which happened in real life at Morning Star Baptist Church [in Mattapan in 1992].

Siobhan also makes a lot of historical references on the show. She brags about being babysat by Mel King, the politician and community organizer that was very heavily involved with the Rainbow Coalition, so I spent time learning about him.

Even sitting at a bar in Boston downtown was information and research for me. Who lived in what neighborhood, stuff like that. I even spent time just watching Boston sports in the ’90s. 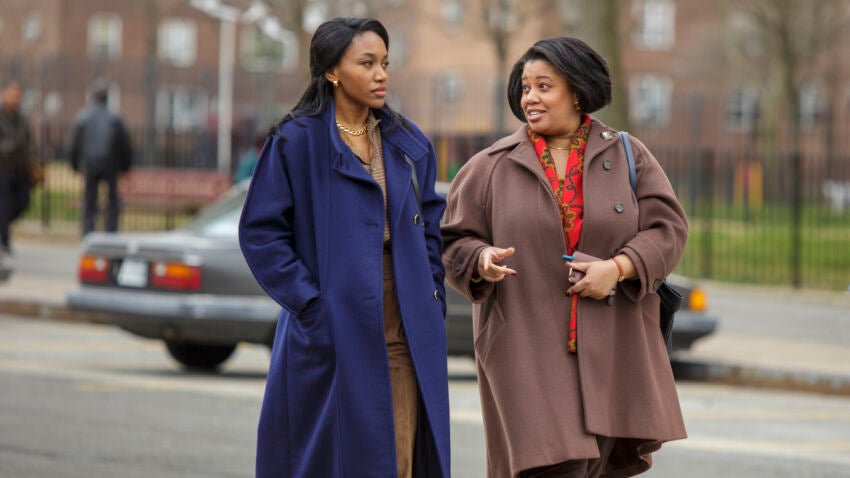 Lauren E. Banks and Pernell Walker in “City on a Hill.”

I know filming for Season 2 was already in progress before COVID. How much filming did you have to do during the pandemic?

We started February 2, 2020. We were on set in March, and we were like, ‘OK, we’re going home for a two-week hiatus. We just need to see what’s happening with this virus.’ Obviously, two weeks turned into months.

We got back into the swing of things around October, November 2020. We didn’t have anyone in our main cast catch the virus, and Showtime and CBS did a really great job with testing, staying clear, showing up to work, and being responsible when we went home.

Did the actors come back to Massachusetts during the pandemic, or was all of that filmed beforehand?

Because New York had very strict restrictions on leaving the state and getting back into the state, they made the executive decision to stay in New York. I think a second unit crew went back to get a couple of things in Boston, but the main cast was in a studio in New York. It was the safest way to do it.

I missed shooting in Boston. It was such a beautiful energy. It’s really hard to please Bostonians, so the fact that you guys liked Season 1 is huge. If somebody from Boston tells you that you got it right, you’re doing a good job. Being on the street, and seeing people who would stop by and say, ‘Hey, I love this show,’ that energy was missed. 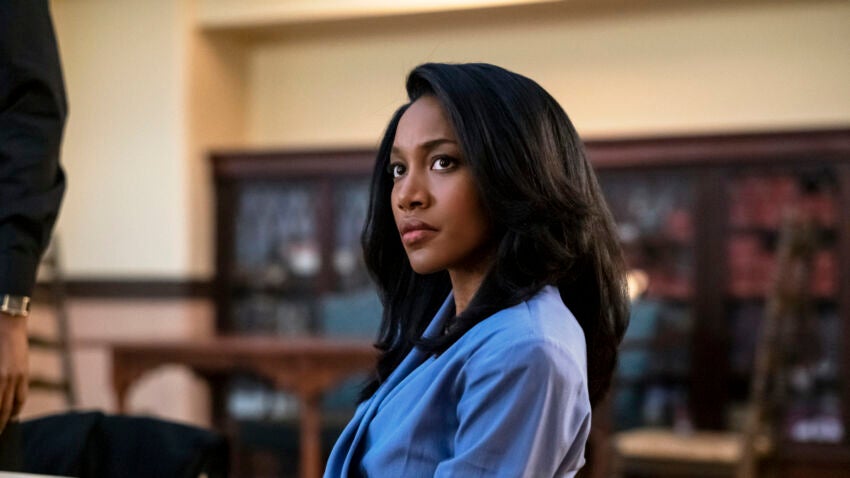 Lauren E. Banks as Siobhan Quays in “City on a Hill.”

The show is based around an early 1990s Boston, but much of what we see on screen resonates in the present day as well. What sort of parallels did you think about while filming, and what messages do you think people can take away from the show?

“City on a Hill” is a show about all different tiers of law enforcement, from police officers to the DA to the FBI. There are complicated issues in our show with police, and obviously in the world as well. We’ve seen a lot of shows are going to check themselves and rewrite scripts. Some shows even got canceled because of the irresponsible way they treat law enforcement, by which I mean they only treat law enforcement as the good guys who put away the bad guys.

I think our world both today and yesterday in the ’90s lets us know it’s a lot more complicated than that. Humans are human. But there are things we can do — systems and institutions we can make better — that can help lead us into the next day, into the future, and help us to relate to each other.

What I appreciated about shooting the show is that we don’t glorify anybody. Rather, we expose both the glory and the beautiful things and the ugliness of humanity within all of our characters. It’s not just law enforcement — it’s also activists and organizers who are also not perfect, who also have complications as well.

If there’s anything someone can take away from watching, I think our show is very curious about what it is that makes us human, and what are the questions we have to ask ourselves and demands that we make of each other to make us better.