After the underwater journey of a lifetime, Cape Cod commercial lobster diver Michael Packard made the 3,000-mile journey to Hollywood.

Less than a week after escaping from the mouth of a humpback whale on Cape Cod, Packard and crew mate Josiah Mayo flew to Los Angeles to tell their whale of a tale to Jimmy Kimmel on his eponymous talk show.

Kimmel’s producers constructed an elaborate humpback whale mouth for Packard to sit in, which the lobster diver said initially caused him some consternation.

“No way am I getting in that. I’m going back to Cape Cod,” Packard said. “But then I thought about it harder, and I said, you know what? It’s the perfect celebration of life. I survived.”

Before diving into the story, Kimmel noted that Packard had previously survived a plane crash that resulted in multiple fatalities, been face to face with great white sharks, and had found a dead body.

“You’ve been through a lot of stuff,” Kimmel told Packard. “You might be bad luck. Josiah, you might want to be careful.”

Kimmel then asked Packard and Mayo to recount the details of last Friday’s maritime miracle.

“I just got hit by a freight truck, bang! Everything just went instantly dark,” Packard said, describing the moment he became trapped in the humpback whale’s mouth. “And I’m just moving, traveling fast through the water. And I’m like, ‘What the heck? Did I just get eaten by a shark?’

Packard said that as he banged, kicked, and struggled for the 30 to 40 seconds he was trapped inside the whale, his mind was racing.

“There’s no way I’m going to get out of this unless he decides to let me go,” Packard said. “I’m dead. This is how I’m going to go.”

Mayo then described the aftermath from his perspective, saying that he pulled up to Packard and asked if he was OK.

Kimmel then brought up a statement from Packard’s Reddit AMA (Ask Me Anything), in which Packard said he hoped Kimmel’s frenemy Matt Damon would play him in a movie about his life.

“I just wonder why you would aim so low,” Kimmel said. “And if he does play you, can the whale eat him? Can that be his final destination?”

Packard rounded out his late-night appearance by plugging the wholesaler that sells the lobsters he catches (Wellfleet Shellfish Company in Eastham), as well as offering a mea culpa to the humpback.

“I just want to apologize to the whale for getting in his way,” Packard said. “I won’t ever do it again.” 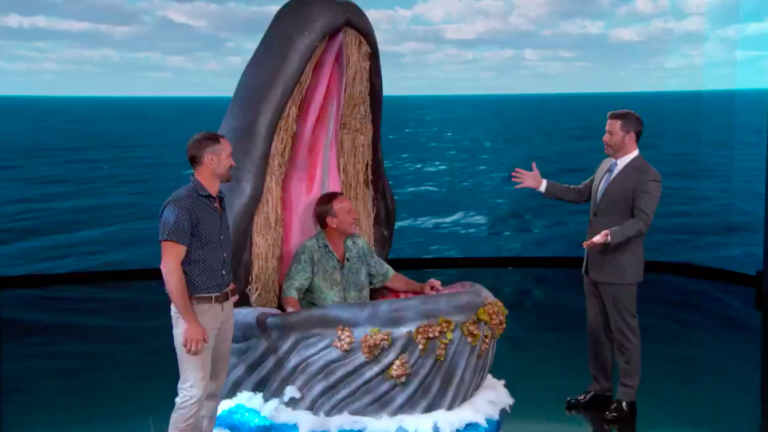 Animals everywhere: Dogs, goats, gorillas, and even a whale made Boston.com coverage this year