Our 2021 fall movie preview looks a lot like last year’s edition, when we wrote about the “topsy-turvy reality” that engulfed the movie world. Customers paid more to stream a movie at home than they would in a theater. Streaming companies, already ascendant before the pandemic, were fast becoming a priority in every studio’s release schedule. And blockbuster sequels, reboots, and spin-offs that had previously been seen as sure things were moved around the release calendar at will, as studios fretted about lost revenues.

Fast-forward to 2021, and little has changed. Despite theater chain AMC rolling out a $25 million ad campaign to entice customers back to the cinema, more and more blockbusters are being delayed or moved to a studio-owned streaming service. Hours before this article was published, Universal joined fellow entertainment behemoths Warner Bros. and Disney in embracing same-day streaming releases, announcing that its “Halloween” sequel “Halloween Kills” would receive a same-day release in theaters and on its streaming service, Peacock, Oct. 15.

In spite of it all, the fall movie season looks like it will be an exciting one, filled with delayed blockbusters, Oscar hopefuls, and a number of movies filmed here in the Bay State. Here are 25 movies that are supposed to come out in the remaining months of 2020. Just don’t hold it against us if studios decide to delay a few of these titles (again).

Clint Eastwood is still starring and directing in movies at age 91, more than 60 years after his big-screen debut. In this modern-day western based on the 1975 novel of the same name, Eastwood plays a retired rodeo star who must venture to Mexico and rescue the son of his former boss.

Based on the 2000 documentary of the same name, “The Eyes of Tammy Faye” tells the story of married televangelists Tammy Faye (Jessica Chastain, “Zero Dark Thirty”) and Jim Bakker (Andrew Garfield, “The Social Network”) as they rise to fame. As their global reach grows, Tammy Faye tries to keep her head above water as scandal threatens to engulf the outwardly happy couple.

“The Many Saints of Newark” (Oct. 1 in theaters and on HBO Max)

Boston native Alessandro Nivola has made a career out of strong supporting turns in prestigious dramas like “American Hustle.” In “The Many Saints of Newark,” a prequel to HBO’s landmark series “The Sopranos,” Nivola is front and center playing Dickie Moltisanti, a made man who shepherds a young Tony Soprano (played by the late James Gandolfini’s son, Michael) in his rise to the top of the titular crime family.

With motion-capture maestro Andy Serkis (Gollum in “Lord of the Rings”) behind the camera, Tom Hardy (“Mad Max: Fury Road”) returns as the Marvel antihero Venom. This time he’ll have his hands full with fellow symbiote Carnage (Woody Harrelson).

It’s a “Knives Out” reunion, as Ana de Armas teams up with Daniel Craig in “No Time To Die,” the final appearance for Craig as James Bond. In the film, Bond has left active service and is enjoying a tranquil life in Jamaica, but he’s quickly recruited to rescue a kidnapped scientist. The mission proves more complicated than expected as Bond finds himself tracking a mysterious villain (Rami Malek, “Bohemian Rhapsody”) armed with a dangerous new weapon.

“Halloween Kills” (Oct. 15 in theaters and on Peacock)

For the first time since “Good Will Hunting,” Matt Damon and Ben Affleck have co-written a movie, along with “Can You Ever Forgive Me?” scribe Nicole Holofcener. Directed by Ridley Scott, “The Last Duel,” is a medieval revenge thriller starring Jodie Comer (“Free Guy”) as a French maiden who tells her husband (Damon) that his best friend (Adam Driver, “Star Wars”) raped her. What follows is an ancient tale of he-said/she-said that resulted in the last legally sanctioned duel in France’s history.

Following his “Blade Runner” sequel, “Blade Runner 2049,” Denis Villeneuve will tackle another sci-fi classic with his adaption of Frank Herbert’s landmark novel “Dune.” In the distant future, Duke Leto Atreides (Oscar Isaac, “Star Wars: The Force Awakens”), along with his wife (Rebecca Ferguson, “Mission: Impossible – Rogue Nation”) and son Paul (Timothée Chalamet, “Little Women”) take stewardship of the desert planet Arrakis, the galaxy’s sole producer of the addictive all-powerful substance known as “spice.” Following a carefully planned betrayal, Paul must adapt to the harsh desert climate as the fate of the galaxy hangs in the balance.

Like many Wes Anderson films, “The French Dispatch” will be gorgeous to look at and feature some of his favorite Hollywood stars. Told in a series of three intertwining tales, the film shares the history of the French bureau of a fictional Kansas newspaper (seemingly inspired by The New Yorker) as it publishes its final issue. Benicio del Toro, Adrien Brody, Tilda Swinton, Frances McDormand, Timothée Chalamet, Jeffrey Wright, Bill Murray, and Owen Wilson represent less than half of the A-list talent in the film, which lands in theaters Oct. 22.

Edgar Wright has yet to make a bad movie, so any film the director puts out is a must-watch. This time, the director strays away from his comedic roots and dabbles in psychological horror, as protagonist Eloise (Thomasin McKenzie, “Leave No Trace”) is mysteriously transported back in time into the body of her idol, a singer named Sandie (Anya Taylor-Joy, “The Queen’s Gambit”). Eloise soon discovers that the glamorous life she imagined in 1960s London is nothing more than a fantasy.

Netflix has assembled some of the best Black actors in the biz for “The Harder They Fall,” a traditional western about a man (Jonathan Majors, “The Last Black Man in San Francisco”) who reassembles his former gang to seek revenge on his parents’ killers. Among the supporting players are Idris Elba (“The Wire”), Zazie Beetz (“Atlanta”), Lakeith Stanfield (“Sorry to Bother You”), Delroy Lindo (“Da 5 Bloods”), and Regina King (“Watchmen”).

A whole new group of superheros are headed to the MCU for Marvel’s Phase 4 in the form of the Eternals, immortal beings who helped shape the course of humanity from on high. Among the god-like heroes are Angelina Jolie (“Salt”), Salma Hayek (“Frida”), and Kit Harington (“Game of Thrones”). Directed by Chloé Zhao (“Nomadland,”) “Eternals” will be in theaters Nov. 5.

Tom Hanks and Apple TV+ are back together again, with Hanks playing the last human on a post-apocalyptic Earth. Hanks’ character, an inventor, is slowly dying, so he creates a robotic dog to take care of his real-life canine and keep both of them company until he passes.

If you liked 2016’s “Jackie,” there’s a good chance you’ll be excited for “Spencer,” a biographical drama about the late Princess Diana. “Jackie” director Pablo Larraín is back at the helm, and instead of Natalie Portman playing Jackie O, Kristen Stewart (“Twilight”) steps into the role of Diana Spencer.

Not to be confused with the upcoming HBO Max series of the same name currently filming in Massachusetts, this “Julia” is a documentary directed by Betsy West and Julie Cohen — the duo behind the 2018 Ruth Bader Ginsberg documentary “RBG.” “Julia” uses previously unseen archival footage of Child, as well as interviews from modern-day celebrity chefs who followed in Child’s footsteps like Jose Andrés and Marcus Samuelsson.

Jason Reitman, the son of “Ghostbusters” director Ivan Reitman, will helm this sequel, which is tied to the original franchise instead of the 2016 all-female reboot. A single mother (Carrie Coon, “The Leftovers”) and her two children ( “Stranger Things” star Finn Wolfhard and “Gifted” star Mckenna Grace) move to a small Oklahoma town, where mysterious, ghostly happenings lead them to discover their family’s ghost-busting legacy.

The Williams sisters get the biopic treatment — or more specifically, their dad does. Will Smith plays Richard Williams, the father and coach tennis legends Venus (Saniyya Sidney) and Serena (Demi Singleton).

The second film from Ridley Scott on this list (along with “The Last Duel”), this ripped-from-the-headlines biopic follows the seamy tale of how the ex-wife of Patrizia Reggiani (Lady Gaga), the ex-wife of Gucci head honcho Maurizio Gucci (Adam Driver), tried to have him murdered.

It’s been 12 years since Jane Campion (“The Piano”) last directed a feature film, so her return to the medium is a cause for celebration. This neo-noir western stars Benedict Cumberbatch and Jesse Plemons as Montana ranchers who find themselves at odds when one marries a local widow (Kirsten Dunst). Early buzz after the film’s Venice premiere suggest “The Power of the Dog” will be a big contender come Oscar season, so be sure to catch it on Netflix starting Dec. 3.

Exactly 50 years after the 1961 movie music, Steven Spielberg is bringing his own adaptation of the classic tale (itself inspired by “Romeo & Juliet”) to the big screen. In this version, Ansel Elgort (“Baby Driver”) and newcomer Rachel Zegler play Tony and Maria, a pair of lovestruck NYC teens who belong to rival gangs.

After some recent wheel-spinning on behalf of the MCU, “Spider-Man: No Way Home” looks ready to push Marvel into its new phase. Struggling with the pressure of the whole world knowing his real identity, Peter Parker (Tom Holland) pays a visit to Dr. Strange (Benedict Cumberbatch) to see if he can use his time wizard powers to create a reality where no one knows that he’s Spider-Man. Obviously, not everything goes to plan, which is just how Marvel fans will like it.

Fans made the 2019 big-screen spin-off of the ITV/PBS costume drama a hit, so the Crawley family and the staff of its estate will be back in cinemas again before Christmas. Along with the vast majority of the original cast, new faces in the film include Dominic West (“The Wire”) and Hugh Dancy (“Black Hawk Down”).

“The Matrix Resurrections” (Dec. 22 in theaters and on HBO Max)

Do you take the blue pill, and see the latest installment in the “Matrix” franchise in the comfort of your own home? Or do you take the red pill, and venture out of your comfort zone into a local movie theater? There are scant details about the plot of fourth film — released 18 years after 2003’s “The Matrix Revolutions” — other than the fact that Neo (Keanu Reeves) and Trinity (Carrie-Ann Moss) are even deeper down the rabbit hole than before. 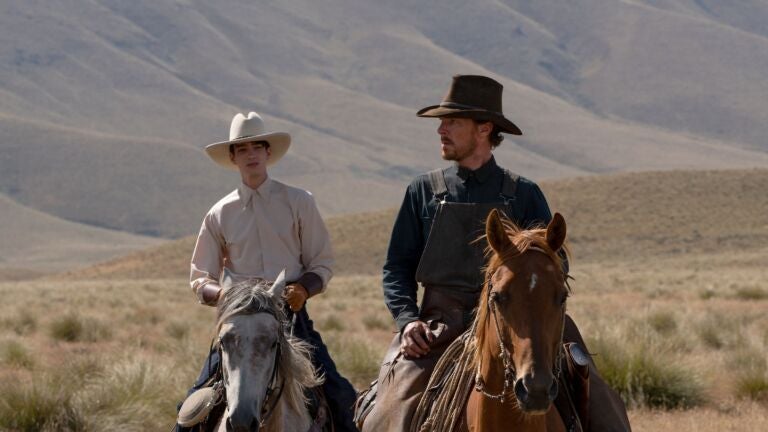