An impressive lineup of hip-hop stars wowed the crowd at the Super Bowl LVI halftime show with a nostalgic and powerful performance at SoFi Stadium on Sunday.

The show marked the first time in Super Bowl history that hip-hop artists made up the entire bill, and was the first five-artist performance since the 2012 game featured performances by Madonna, Cee Lo Green, LMFAO, M.I.A., and Nicki Minaj.

“For the first time hip-hop and rap take center stage,” NBC announced ahead of the performance.

Snoop Dogg and Dr. Dre kicked things off with “The Next Episode” and “California Love” as they stood atop a stage made up of a large, monochrome city street featuring store fronts and exposed doll-house style rooms.

50 Cent was up next, performing “In da Club” while hanging upside down, followed swiftly by a quick “Family Affair” and “No More Drama” medley by Mary J. Blige. Blige rocked out in thigh-high white boots and sang with plenty of her signature vocal gravel.

In an impressive piece of staging, Kendrick Lamar performed “Alright” surrounded by dancers all dressed in the same suit, with bleached hair, and sashes with “DRE DAY” embroidered across them.

Eminem was the last to arrive, standing atop the unique set and performing “Lose Yourself” alongside Anderson. Paak who made a surprise appearance on the drums.

The show ended with the attention back on Dr.Dre as the impressario performed “Still D.R.E.” with the help of Snoop Dogg to close things out. A large group of dancers surround the group as all five headliners made their way to the center platform for a final pose together.

As for the reaction? Millennial’s far and wide seemed to enjoy every second of the nostalgic performance packed full of 2000s classics. 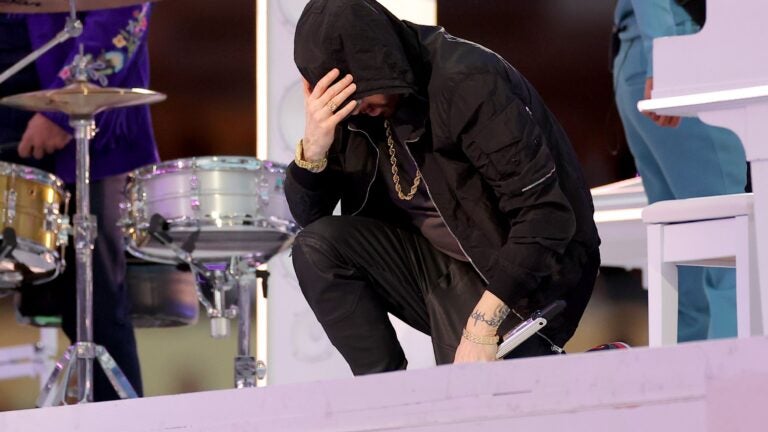