Is it possible that there will be even more movies filming in Massachusetts in 2022 than there were last year?

Even with the continued threat of COVID-19, 2021 was a productive year for the Massachusetts film industry. Critically acclaimed movies like “Don’t Look Up” and “The Tender Bar” and prestige cable shows like “Dexter: New Blood” and “Julia” spent months filming all over the state, as did upcoming releases like Marvel’s “Black Panther: Wakanda Forever,” the Whitney Houston biopic “I Wanna Dance with Somebody,” the Stephen King adaptation “Salem’s Lot,” and the Ryan Reynolds-Will Ferrell Christmas musical “Spirited,” among others.

So far, 2022 is shaping up to be another blockbuster year for Bay State productions. Less than halfway through 2022, there are at least nine movies and TV shows set to be produced in the state this year, with more likely to be announced in the coming months.

With the state’s film tax credit made permanent and a slight relaxation of expensive on-set COVID-19 regulations nationwide, it seems like the conditions are right to say Lights, Camera, Boston.

Here is everything we know about the movies and TV shows filming in Massachusetts in 2022.

Little has been said via official channels about this upcoming Netflix project, which is based on the 2017 novel “The 12 Lives of Samuel Hawley” by Hannah Tinti and counts Jason Bateman (“Arrested Development”) and Matt Reeves (“The Batman”) among its producers, according to multiple reports.

Tinti, who grew up in Salem, set her novel in the fictional Massachusetts fishing town of Olympus, where 12-year-old Loo learns about her father Samuel through stories about the 12 scars he accumulated during his criminal past.

Production List pegs “12 Scars” to start filming in the Boston area on June 6.

In late 2021 and early 2022, 20th Century Films shot scenes for “Boston Strangler,” a retelling of the series of murders in Boston in the 1960s. The movie stars Keira Knightley (“Pirates of the Caribbean”), Carrie Coon (“Gone Girl”), Kingston resident Chris Cooper (“Little Women”), and Boston native Alessandro Nivola (“The Many Saints of Newark”).

“Boston Strangler” will tell the story of Loretta McLaughlin (Knightley), a reporter who first connected the dots between a series of murders in Boston in the 1960s while working at the Boston Record American. McLaughlin, who later became the editorial page editor at The Boston Globe, wrote a four-part series about the murders along with fellow Record American reporter Jean Cole (Coon) that first gave the killer the “Boston Strangler” moniker.

Zendaya fans have been on the lookout for the “Spider-Man: No Way Home” star in Boston for months now as she films a romantic drama directed by Luca Guadagnino (“Call Me By Your Name”), alongside Josh O’Connor (“The Crown”) and Mike Faist (“West Side Story”).

The film is set in the world of tennis and follows Tashi (Zendaya), a tennis player-turned-coach who has taken her husband, Art, and “transformed him into a world-famous Grand Slam champion.” When Art’s career begins to slump, Tashi signs him up for a “Challenger” event — a step below the top-tier ATP tour — where he faces off against Patrick, “his former best friend and Tashi’s former boyfriend,” per Deadline.

Details about filming locations have been kept close to the chest, but the stars have been spotted filming scenes in the Back Bay, and Zendaya has been seen several times around East Boston.

Harvard grad Tommy Lee Jones (“The Fugitive”) and Boston native Ben Foster (“3:10 to Yuma”) have reacquainted themselves with the Bay State this spring while filming “Finestkind,” a crime drama set in New Bedford which began filming in April.

The thriller is centered around two brothers played by Foster and Toby Wallace (“Babyteeth”) who were raised separately and are reunited as adults. Desperate circumstances cause the brothers to hatch a deal with a Boston crime syndicate, which spells danger for the brothers and their father (Jones) as well as a young woman (Jenna Ortega, “Iron Man 3”).

Along with New Bedford, “Finestkind” will shoot scenes in Brockton, Dedham, Fairhaven, Scituate, and Stoughton.

“The History of Sound”

Author/artist Ben Shattuck, who is married to actress Jenny Slate, has put down roots in Massachusetts, where he owns a general store, serves as a gallery curator, and runs a writing residency. So it makes sense that the film adaptation of Shattuck’s award-winning short story “The History of Sound” would film a handful of scenes in the region, too.

Set partially in the Boston area in the 1910s, “The History of Sound” tells the story of Lionel (Paul Mescal, “The Lost Daughter”) and David (Josh O’Connor, “The Crown”), who “set out to record the lives, voices and music of their countrymen” in what turns out to be a transformative experience for both of them, according to The Hollywood Reporter.

“The History of Sound” is aiming for a June start date for filming, according to Production List.

According to a plot synopsis obtained by Deadline, “The Holdovers” takes place at prep school Deerfield Academy over the Christmas holidays in 1970, where roundly disliked professor Paul Hunham (Giamatti) is tasked with supervising students staying at the school over break. Eventually, the only “holdovers” left at the school are Paul, Deerfield’s head cook Mary (Da’Vine Joy Randolph, “Empire”), and a 15-year-old troublemaking student named Angus.

Actor Bradley Cooper’s first directorial effort since 2018’s “A Star Is Born” will take him to Massachusetts in May.

“Maestro” is a biopic of legendary composer Leonard Bernstein, starring Cooper in the lead role. While primary production is based in Los Angeles, at least a week of filming will take place at Tanglewood, the Western Massachusetts music venue which has been the summer home of the Boston Symphony Orchestra since 1937.

Along with Cooper, “Maestro” is set to star Carey Mulligan as Bernstein’s wife, Felicia, while Matt Bomer (“Magic Mike”) is in talks to play one of Bernstein’s lovers, according to Variety.

Things are getting spooky out in Central Massachusetts thanks to a new comedy from HBO Max.

Written by “Saturday Night Live” writer Kent Sublette and directed by Craig Johnson (“The Skeleton Twins”), “The Parenting” centers around a young couple who brings their parents together to meet for the first time at a rustic rental home, only to find that the home is haunted by a centuries-old ghost, according to Deadline. The ensemble comedy stars Brian Cox (“Succession”), Edie Falco (“The Sopranos”), Lisa Kudrow (“Friends”), Dean Norris (“Breaking Bad”), and Parker Posey (“You’ve Got Mail”).

Filming for “The Parenting” kicked off in April, and has taken place in Boston and Worcester.

Amherst native and Pulitzer Prize-winning playwright Annie Baker is returning to her roots for her first directorial effort. Baker, who won the Pulitzer for 2014’s “The Flick,” will film her new project in Western Massachusetts this summer, according to a casting announcement.

The as-yet-untitled BBC Films movie will follow 11-year-old Lacy, her mother Janet, and three people who come into their lives over one summer in 1991.

Starring Julianne Nicholson (“Mare of Easttown”) and Sophie Okonedo (“Death On the Nile”), the film will be produced by Dan Janvey (“Nomadland”), according to Production List. 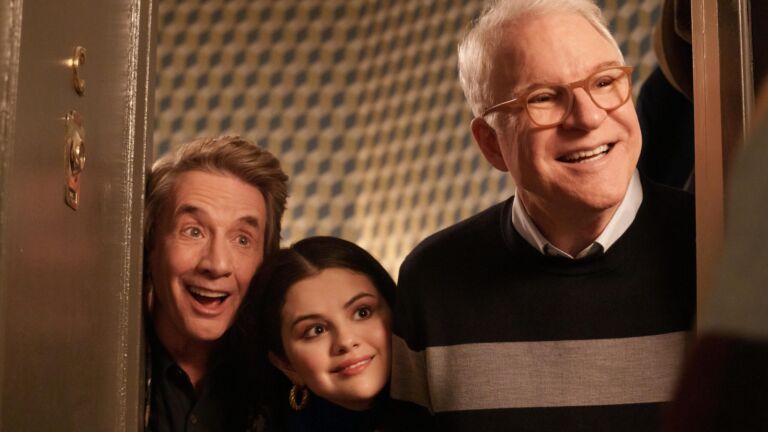