Saturday Night Live once again casts a rapper as both host and musical guest for this week’s Halloween episode. The 24-year-old Jack Harlow is coming off the release of his second album and a world tour, and is a gateway to the show for young fans.

SNL mainstay Cecily Strong returned to this week’s episode—she was absent from the season’s first few episodes because of her role in the one-woman show “The Search for Signs of Intelligent Life in the Universe” at the Mark Taper Forum in Los Angeles. The play, which originally starred Lily Tomlin, wrapped Oct. 23, so Strong is back with her SNL castmates.

“We’re what your grandma is talking about when she says ‘I saw this on the news,’” she said.

Keenan Thompson reprised his Herschel Walker impersonation, Mikey Day plays Dr. Oz, and Cecily Strong is Kari Lake, the GOP candidate for governor of Arizona. Day as Oz rooted for the “Pennsylvania Phillies” and spoke about having a delicious “Philadelphia cheese and steak.” Strong as Lake referred to constantly being in “soft focus,” and targeting the issues most pressing to her constituents. “Arizonans want to talk about the issues that affect them, like crime in New York, or crime in Detroit.” All three mocked the cult of personality that’s taken hold on the right this election cycle.

Jack Harlow made a few self-deprecating jokes during his monologue which got some laughs from the audience. He compared himself to the goat from Narnia, and said that some folks online say he looks like “the guy who rips the tickets in half at the movie theater,” or like “if you tried to draw Justin Timberlake from memory.”

He plugged his recent second album release, and mentioned that he just finished shooting his first movie, “White Men Can’t Jump,” a remake of the 1992 sports comedy film. Harlow also walked into the crowd to speak to an audience member, who said she’s a “huge Jack Harlow fan.”

This sketch with Cecily Strong and Mikey Day treated the streets at 2:53 a.m. on Halloween night filled with costumed partiers as the “Post-Halloween Red Carpet Special.” They interviewed “Halloween icons” like the drunk guy in an inflatable dinosaur costume, the dad who forgot to take his kid trick-or-treating earlier, the wasted white girl looking for her Uber, and the “sober middle-aged man who is trying to walk his dog.” Harlow made an appearance as a frat boy in a tampon costume, noting that his dad will “handle any legal trouble” for him, and asking where he can find some coke.

The cast members are at an AA meeting when Jack Harlow opens up—about an idea he has for a Pixar film. The meeting members then collaborate on ideas for the film, about lost luggage trying to find its way home. “That’s Jason Bateman!” one member says about the suitcase who’s a little uptight but funny. “And maybe there can be a lady suitcase who’s got, like, I don’t know, boobs,” said Keenan Thompson.

Tom Hanks makes an appearance late in the skit to copious audience applause, foreshadowing another Halloween sketch later in the night.

In a skit almost identical to the original David Pumpkins skit, a 2016 sketch written at 4 a.m. one night that ended up becoming a hit with fans, Jack Harlow, Ego Nwodim, and Andrew Dismukes are visitors to a horror ride. After terrifying scenes of classic horror characters like Annabelle and Michael Myers, David Pumpkins (Tom Hanks) accompanied by Mikey Day and Bobby Moynihan begins to appear in every scene. The sketch is almost a shot-for-shot remake of the original, but the crowd loved it. 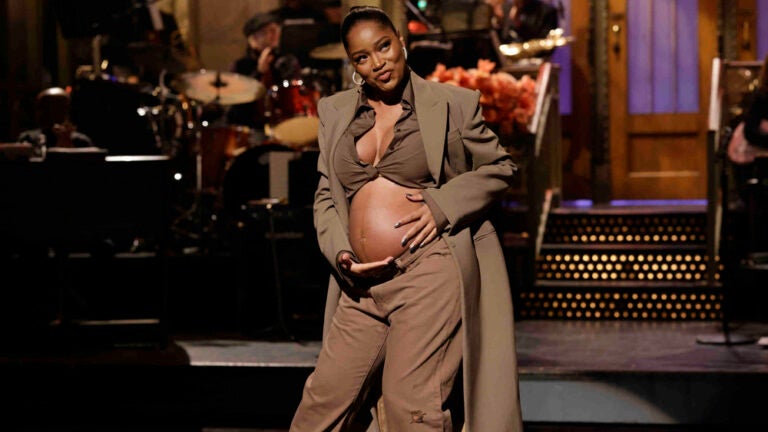