On TikTok, @CarloAndSarah show the hilarious — and often endearing — situations that arise when cultures clash. In real life, they want to bring people together.

Sarah Mollica, 25, and Carlo Bruno Longo, 26, live together outside of Boston. Their cross-cultural comedy has amassed over 4.3 million TikTok followers in less than two years. It’s given them the opportunity to put their nursing aspirations on pause and create videos for their mass audience full-time.

The secret recipe to their success? A passionate Italian meets a clever American, and harmless pranks ensue. Mollica films Longo, who is from southern Italy, reacting to the best (and worst) of what America has to offer. A video about breaking spaghetti made them an overnight success.

“In one day, we had a million followers,” Mollica, a Massachusetts native, told Boston.com.

The recently married couple has surpassed global borders to be together, bringing along a massive online audience at the same time.

“No matter where we go, people come up to us and tell us about their connections to Italy,” Mollica said. “That’s one of our favorite things that has come out of social media.”

Beyond TikTok fame, Carlo and Sarah share a love story that spans years — and countries. The pair first met seven years ago at a Southern Italy beach club owned by Longo’s parents.

“2015 was the first time that I ever saw Carlo,” Mollica said. “He was a lifeguard there. I had a boyfriend at the time, so I didn’t really pay attention to him, but I guess he paid attention to me because that summer he kept waiting for me to come back.”

Mollica continued to visit the beach club every summer, as she also had family nearby. Unbeknownst to her, Longo continued to take notice and began to learn English so he could talk to her during her visits.

“I try so badly but she didn’t want to [go out on a date],” Longo said. “I didn’t speak any English before. So I said ‘Okay, if she comes back, I have to be ready for speak with her.’ So I started to study English from some YouTube videos.”

Mollica returned to Italy in 2019. When Longo heard she was finally single, he asked her father for permission to take her out on a date — the first of many cultural differences in their relationship, according to Mollica: “I never experienced that with my American boyfriends ever.”

“We went out on our first date and talked with Google Translate for 10 hours straight. And we’ve been together ever since,” she said.

Mollica and Longo remained long-distance through the year, but the COVID-19 pandemic made things significantly harder. The two still made efforts to see each other through safety measures and travel restrictions: “We researched every day — literally every day — all day, about countries that allow both of us into its borders.”

The couple were able to reunite in Ireland after nine months apart, and Longo seized the moment to propose.

But the newly engaged couple found themselves separated yet again. That’s when Mollica turned to TikTok.

Mollica began posting videos to catalog their relationship, but says she “didn’t really put any main focus on the Italian-American stuff.” Early videos on @CarloAndSarah focus mainly on the couple’s perseverance through long distances.

That is, until one of Mollica’s pranks on her husband went viral.

In June 2021, Mollica posted a video of her breaking spaghetti before boiling it — a major Italian no-no. Longo immediately runs into the frame, shocked: “This is not spaghetti, my love! Come on! You know this is illegal in Italy.” The video was a hit for the couple, gaining them almost 700,000 followers in one night.

“That one blew up, like literally 15 million views in two hours. I remember me and Carlo looking at each other and we were like ‘what is happening right now?’”

Their subsequent videos have racked up millions of views from fans around the world. Mollica purposefully breaks Italian food rules, like asking Carlo to put ice in her wine (“I bring you in airport and you leave tomorrow,” he scolds), or having him react to American phrases like ‘rain check’ (“But there is the sun?”).

To an average viewer, Mollica seems like an innocent American who doesn’t know that oat milk in coffee is a sin to most Italians. But Mollica said her time in Italy taught her a lot about Italian culture — and how exactly to prank her husband.

“It’s honestly easy for me, because Carlo’s very easy to prank,” Mollica said. “I know his personality so I know what’s gonna make him mad or laugh.”

Longo said he’s unlikely to prank her back, as Americans don’t share the same customs as Italians: “We Italians are more proud of our culture, in particular of the food.”

“In America, we have a bunch of different cultures that we can immerse ourselves in, but in Italy they really don’t, especially where Carlo is from,” Mollica said. “They are definitely broadening their horizons, but before it was just, ‘Don’t mess with the pizza and the pasta!’”

Mollica has created all of the couples’ videos since the channel’s infancy, as Longo was subject to intercontinental work restrictions. While he recently got federal work permission, he said we may not see him behind the camera any time soon.

“​​She’s the genius behind this, she’s the creative. If I try, I am horrible,” Longo said.

Mollica and Bruno recently moved in together outside of Boston.

Famous for his opinions on American culture, Longo has opinions on Boston’s Italian scene as well. Complimentary of the “ambiance” of the North End, the couple enjoys restaurants such as Monica’s Mercato and Salumeira (said to have the best Italian sub in Boston) and Antico Forno — billed as “The Most Authentic Italian Restaurant.”

Longo said he’s still hesitant over America’s influence on some Italian traditions: “He was nervous when he saw fried ravioli at the St. Anthony’s feast,” Mollica laughed.

The couple enjoys spots like Eataly, but Longo said that while the food is authentic, the prices are certainly not.

“He lists things that he misses from Italy and it’s always like, ‘I miss the cheese!’ I say ‘Okay, we can go to Eataly and get the cheese.’ He’s like ‘no, I miss the cheap cheese,” Mollica said.

Above all, the couple said their favorite opportunity social media has granted them is the people they have met along the way.

“It makes us so happy when they say ‘Thank you so much for sharing, make us to laughing.’ We feel very grateful,” Longo said. 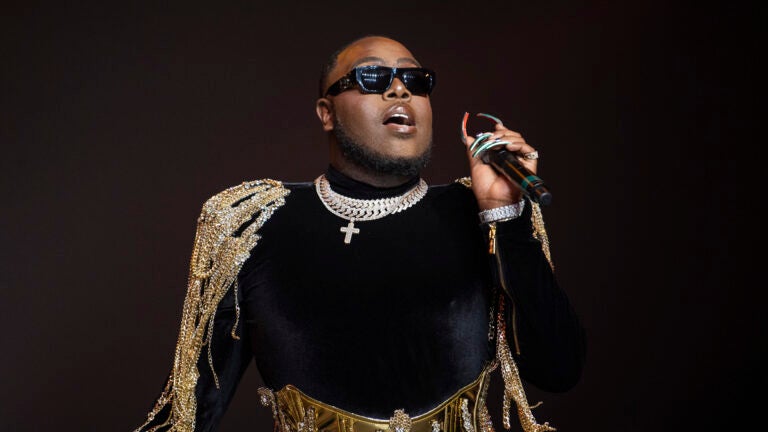