Even before the curtain lifts on Cheers Live on Stage, now playing at the Citi Shubert Theatre before going on a national tour, audiences are hit with a wave of nostalgia. In a pitch-perfect recreation of actor John Ratzenberger, the voice of the actor playing Cliff Clavin comes across the PA system to tell the crowd to turn off their phones and refrain from flash photography.

Of course, cell phones didn’t exist during the classic sitcom’s 11-season run on NBC from 1982 to 1993, but this announcement is one of very few modern additions during a funny, engaging two-act show. While other stage adaptations of movies and TV shows make wholesale changes to scripts and plotlines (especially when that adaptation is a musical), Cheers feels exactly like it did 35 years ago. Here are five ways Cheers Live on Stage perfectly transports you back to the sitcom world of Sam, Diane, Norm, Cliff, and the rest of the gang. 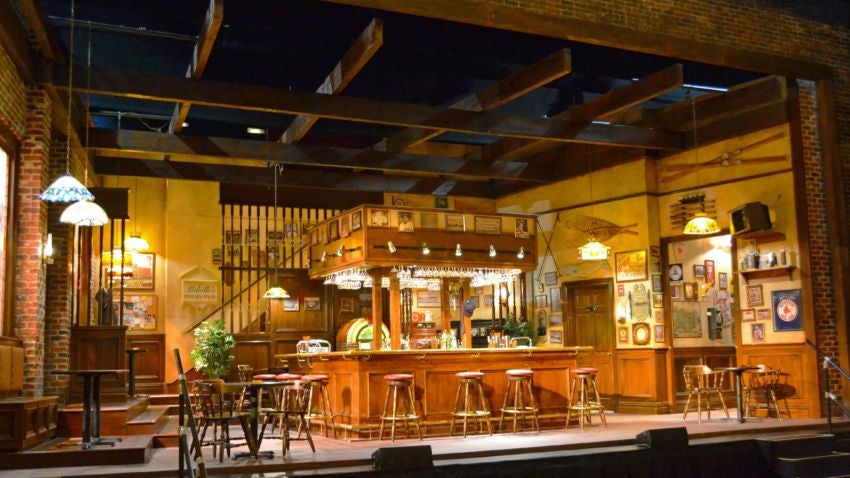 The set of ‘Cheers Live on Stage.’

1. The bar is a beautiful, gleaming replica of the original

As the lights dim and the curtain lifts, the audience breaks into rapturous applause before a single performer takes the stage. The cheering is for the bar, which bears a resemblance to the original even the Cheers bars in Beacon Hill and Faneuil Hall don’t imitate. During intermission, those who’ve purchased VIP tickets can climb up on stage and order a drink from bartenders who aren’t Sam or Coach, and many who aren’t among the lucky few still gravitate toward the stage to take photos. Just as the TV show wouldn’t be the same if it were set at another bar, the play wouldn’t be as successful in a cheap facsimile of the original set.

2. The performances are worthy of their predecessors

No one in the world can replace the likes of Ted Danson, Shelley Long, Rhea Perlman, and George Wendt, but their stage counterparts do a pretty admirable job. As Diane, Jillian Louis has the most lines and most difficult role, but she mostly pulls it off. Though her facial expressions and gestures occasionally resemble the silliness of Kate McKinnon more than the refined aloofness of Long, she perfectly captures Diane’s essence as a holier-than-thou grad student who still puts herself above her fellow bar employees and patrons even as she spends every moment with them. Opposite Louis, Grayson Powell plays a solid Sam Malone, pairing well as a foil to Diane’s emotional outbursts and capturing Ted Danson’s loping walk and wisecracking nature.

Of the other four principal roles, Sarah Sirota’s brassy waitress Carla Tortelli stands out, the energy of her righteous anger and withering sarcasm radiating from the stage. As Coach, Norm, and Cliff, respectively, Barry Pearl, Paul Vogt, and Buzz Roddy deliver each one-liner with aplomb. It’s a group effort, and all six cast members mesh as if they’ve been sitting at the same bar counter together for years. 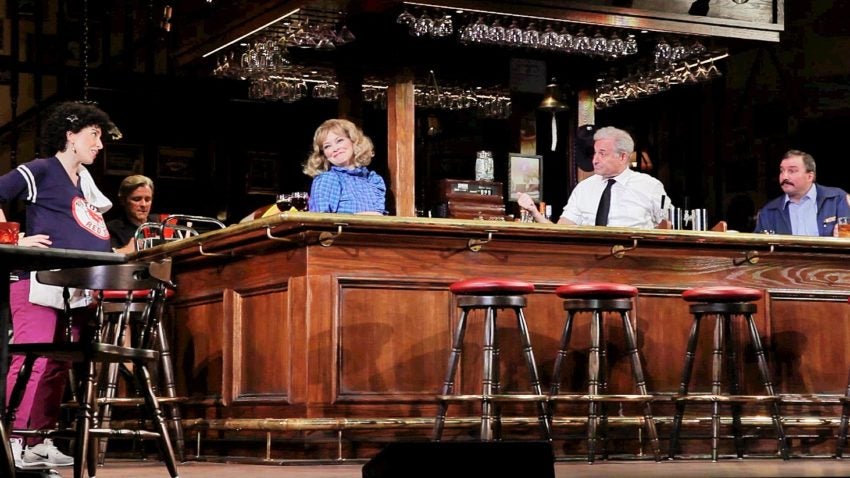 The cast of ‘Cheers Live on Stage.’

3. The plot and lines are almost identical to the show’s first season

The play takes place during the first season of Cheers, with the opening scenes matching the pilot episode, “Give Me a Ring Sometime,” almost line for line. We meet Diane and her fiancé, Sumner, before he abandons her on a barstool and absconds with his ex-wife to Barbados. The rest of the first-season regulars meet (and disapprove of) Diane, but by the end of the episode, she has a job as a cocktail waitress. Later on, the show picks up the plot of “The Spy Who Came in for a Cold One,” in which Diane learns a lesson in customer relations while dealing with a man who claims to be a spy, then a poet, then a millionaire.

The only noticeable anachronism in the script is when Carla shouts at Sam for an order of Yuengling, a Pennsylvania beer that only became widely available in Boston this decade and is included due to a sponsorship tie-in. Beyond that, the words of the Charles brothers remain mostly untouched. Even coach’s complaints about the Patriots needing a quarterback, which are laughably inaccurate today, were all too true in the spring of 1982 following a season in which the Pats finished 2-14.

Considering that the man credited with adapting the play, Erik Forrest Jackson, only made minor changes to the original TV scripts, it’s not surprising that Cheers Live on Stage nails the sitcom’s other subtleties, as well. Norm occupies the same corner barstool in every scene, kicking people out if they dare take it. Everyone’s attire is period-appropriate, with Diane’s puffy, fluorescent blue blouse an eye-catching highlight. The play even brings back a favorite recurring character from the sitcom, Harry “The Hat” Gittes, a con artist who cons the other characters out of drinks and dollar bills in amusing fashion. 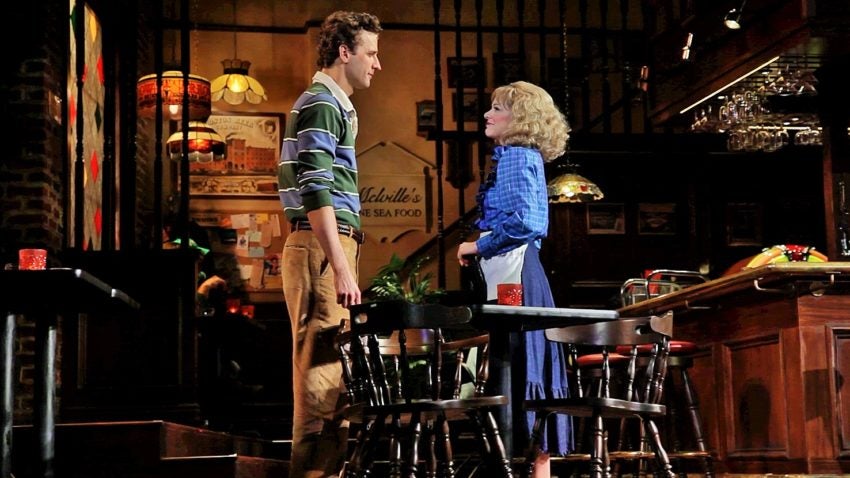 Grayson Powell as Sam and Jillian Louis as Diane in ‘Cheers Live on Stage.’

5. The show concludes on a high note

Following the arc of the first season, Cheers Live on Stage concludes with a plot from “Showdown,” the two-part season one finale in which Sam’s perfect brother Derek arrives and sweeps everyone at the bar (including Diane) off their feet. Perennially unemployed Norm gets a job, generally clueless Coach is suddenly fluent in Spanish, and Diane is set to fly to Europe with Derek on his brand-new jet. Of course, after a season’s worth of flirtatious bickering, both Sam and Diane nurse feelings for each other, but are too stubborn to admit it.

The play ends as the duo moves toward each other, yelling inches from each other’s face, before ending with a kiss. The audience celebrates, playing the role of the sitcom’s live studio audience to a tee. As the lights come up and the sitcom’s theme song plays, you leave in a pleasant daze. For two hours, you were transported to a place where everybody knows your name, and you never wanted to leave.

Cheers Live on Stage will be at the Citi Shubert Theatre until Sunday, September 18. Tickets start are $30-$100, and are available on the Shubert’s website. 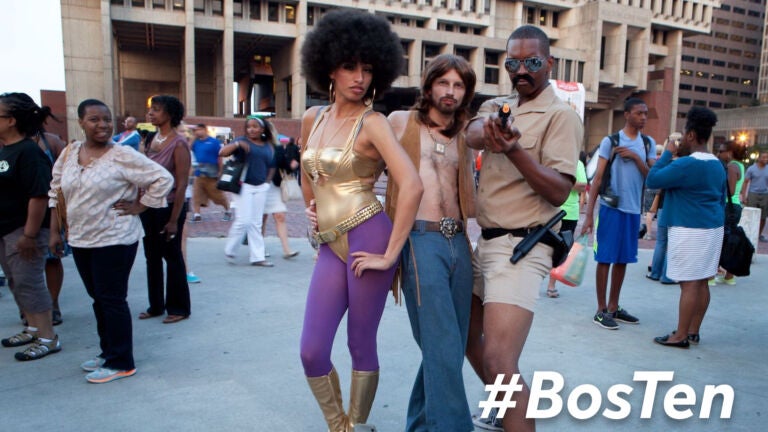