Local organizers of this Saturday’s 49th edition of the Boston Pride Parade have chosen the theme “Looking Back, Loving Forward” to highlight the 50th anniversary of the Stonewall Riots, which were a major catalyst for the Pride movement.

“In this anniversary year, the Boston community selected the twofold theme Looking Back, Loving Forward to rejoice in the strides we have made over the last half-century and to acknowledge the struggles that still lie ahead,” the organizers wrote in the official 2019 Boston Pride Guide. “While it is important to commemorate the golden anniversary of Stonewall, we did not want to lose sight of the significant activism that occurred both before and after the legendary riots.”

Numerous events celebrating the LGBTQ community, including those that are both officially affiliated with Boston Pride and those that are not, have taken place throughout the Boston area since the raising of the rainbow flag at City Hall Plaza this past Friday. Many others are scheduled for the rest of the month. But the biggest gatherings will occur this Saturday, as City Hall plays host to the Pride Festival and Concert and serves as the finish line of the Pride Parade route.

Here’s what you need to know about Saturday’s festivities. 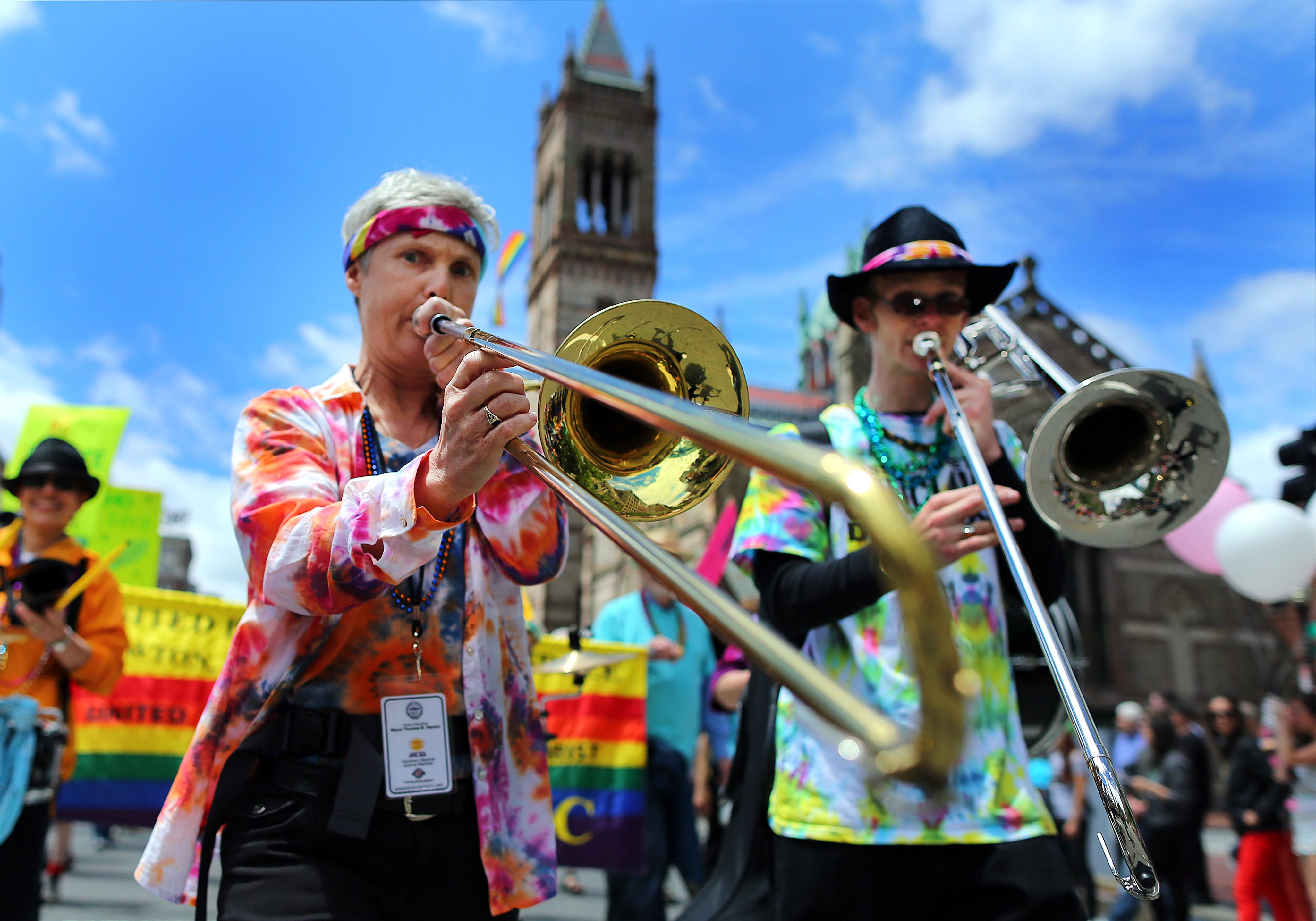 What time does it all start?

The Pride Festival will begin at City Hall around 11 a.m., while the Pride Parade will head out from the Back Bay’s Copley Square around noon. Copley will be full of parade participants and well-wishers, so if you’re looking to watch the start of the parade and want a relatively unobstructed view, get there a bit early. If you’re planning to catch the parade farther down the route, arriving around 12 p.m. should be OK.

The parade route begins in Copley Square, at the corner of Boylston and Clarendon streets. It dips into the South End by heading down Clarendon, then takes a left on Tremont, a left on Berkeley, a right back onto Boylston, a left on Charles, a right onto Beacon, and a final left back onto Tremont, before arriving in Government Center. If Copley Square is too packed, catching the parade on Charles Street as it runs between the Boston Common and the Public Garden is a good bet. 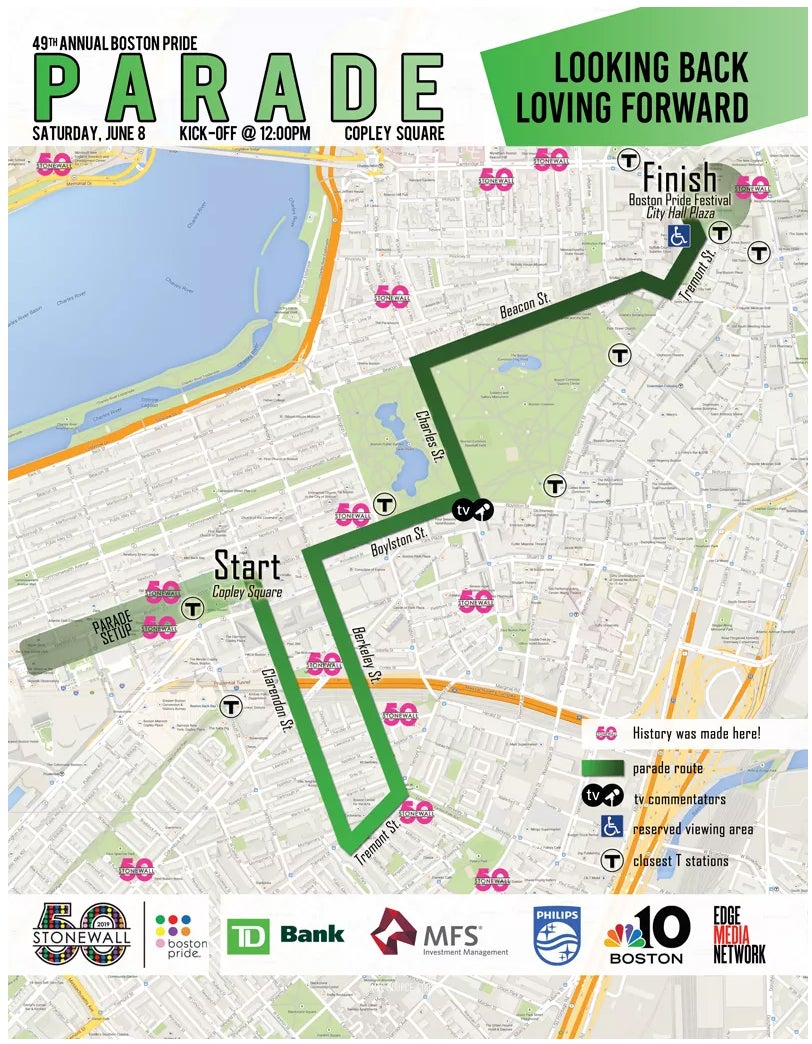 What should you expect?

Anticipate thousands of people marching, cheering, dancing, and riding through the heart of Boston, rain or shine. Organizers said they expect to welcome more than 300 organizations to the parade, and there will be participants of all ages and from all walks of life, including groups from churches, high schools, and after-school centers. Don’t be surprised if you see some eclectic outfits along the way, as well. 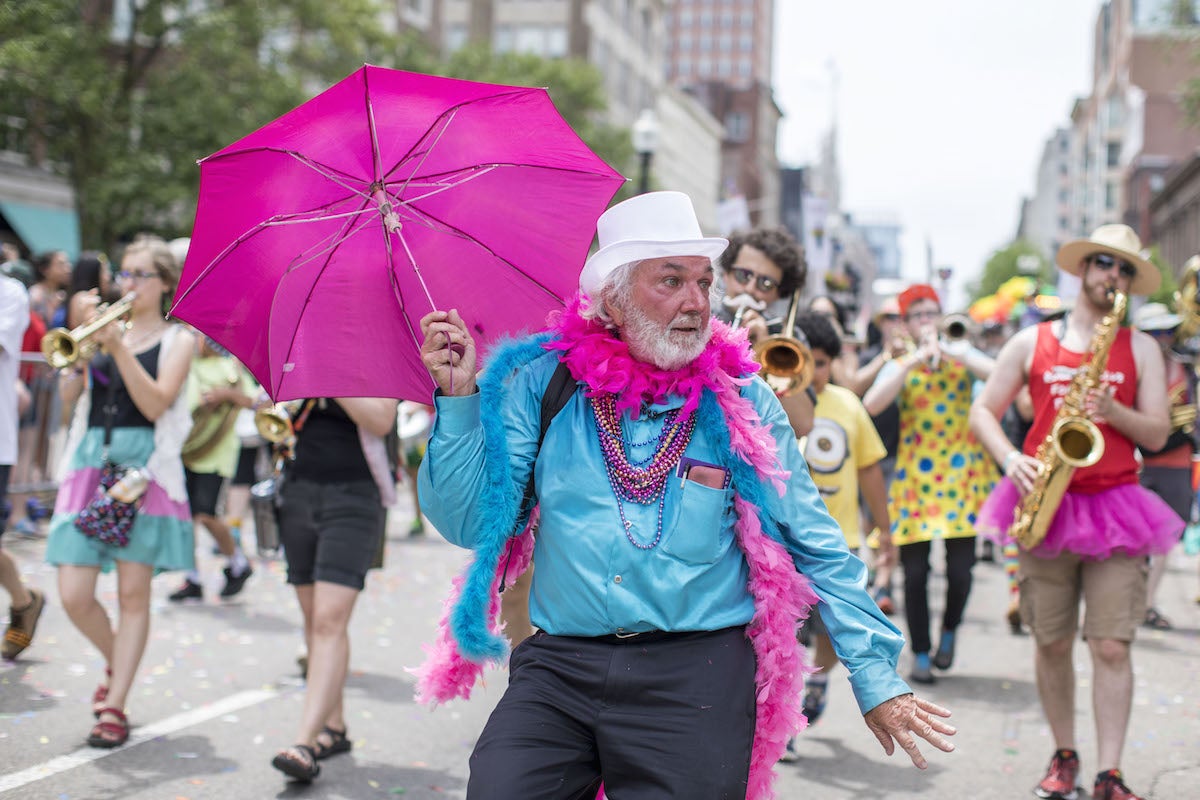 A man dances down Boylston Street during the 2018 Boston Pride Parade.

What should you do before, during, and after?

While the Pride Parade and Festival are the marquee Pride Week events, plenty of other activities will go on throughout the day. On Saturday morning, you can join LGBTQ-friendly churches near the parade route for the 10 a.m. Pride Interfaith Services at Union United Methodist Church and the 11 a.m. Pride Morning Worship just down the street at Old South Church.

At City Hall, the Pride Festival and Concert will be headlined by Todrick Hall, an “American Idol” season nine semifinalist, Broadway performer (“Kinky Boots,” “Chicago”), and singer-songwriter. Also on hand will be singer Robin S., whose 1990 song “Show Me Love” was a top-five hit on the Billboard Hot 100, and singer/house artist Beth Sacks, who has been putting out dance music with DJ Aron since 2012.

Once the festival winds down around 6 p.m., the Boston Pride Youth Dance will take place at City Hall until 10 p.m. (tickets cost $10). Elsewhere, the LUSH Womxn Pride Party at ICON will begin at 8 p.m. (tickets are $20).

For even more activities happening this weekend and throughout the rest of Pride Month, check out the calendar of events on the Boston Pride website. 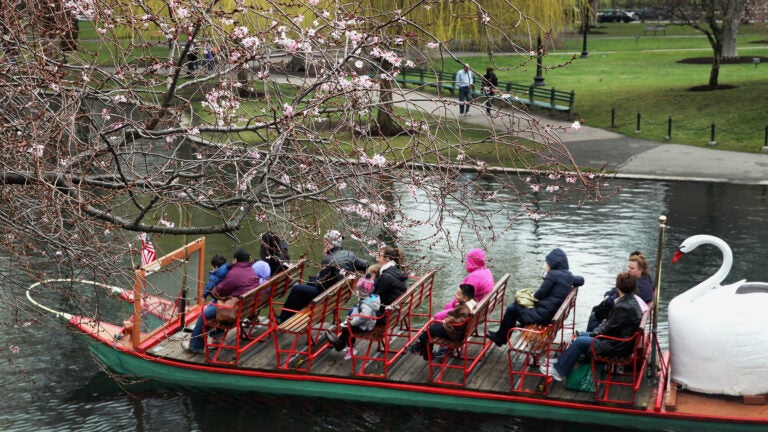