At a cultural moment when “immersive experiences” seem to pop up once a week, “Beyond King Tut: The Immersive Experience,” which opens in Boston July 8, manages to transcend the genre and exceed expectations.

In celebration of the 100th anniversary of archaeologist Howard Carter unearthing King Tut’s tomb in 1922, “Beyond King Tut” — a collaboration between National Geographic, Paquin Entertainment Group, and Immersive Experiences — provides visitors with an experience that’s both educational and visually dazzling.

Visitors to the SoWa Power Station are greeted by a short film produced by National Geographic, before a hidden door in the wall slides open and ushers visitors into a winding series of rooms and passages filled with facts about Tutankhamun’s life and Carter’s discovery.

Because of The Grand Egyptian Museum’s (quite reasonable) decision to keep all of its Tut artifacts at its own museum for the 100th anniversary, “Beyond King Tut” relies on a mix of high-res photos from National Geographic’s archives, wall-to-wall visual tapestries of ancient Egypt, and replicas of the artifacts, including a detailed re-creation of Tut’s shrine.

More so than recent immersive experiences devoted to artists like Van Gogh or Monet, “Beyond King Tut” tells a concrete story arc, with a beginning, middle, and end. As guests move through the exhibit, they will find rooms devoted to the mummification process and the preparation of the burial chamber. Then they finish in a giant room devoted to a visual creation of how Egyptians envisioned the after-life.

Part of the strength of “Beyond King Tut” is the SoWa Power Station, which proved itself once again to be an ideal venue for immersive experiences following the debut of “Immersive Van Gogh” there in December 2021. Shortly before “Beyond King Tut” arrived in Boston, the exhibit had its premiere at the National Geographic Museum in Washington, D.C. But in “BKT” creative producer Mark Lach’s eyes, the Boston edition represents the “world premiere” of the immersive experience.

“In D.C., they have a much smaller venue,” Lach told Boston.com. “We did a version of the show there, but their ceiling heights are 1/3 of [the SoWa Power Station]. It’s the same storyline, but a very different experience.”

Following the formal immersive experience, guests who elect to pay for a VIP ticket will strap on VR headsets to watch the film “Tutankhamun: Enter the Tomb.” Narrated by Hugh Bonneville (“Downtown Abbey”), the film goes into greater detail about the contents of King Tut’s tomb, and gives guests an up-close, 360-degree look at some of the treasures that lie within. That said, given the price difference — $22.50-32.50 for GA vs. $73 for VIP — the add-on may not be worth it for everyone.

In all, when it comes to immersive experiences, “Beyond King Tut” is at the apex of the pyramid. Pairing the institutional knowledge and resources of National Geographic with the visual brilliance of its partners, the exhibit is the first must-see of its genre to land in Boston. 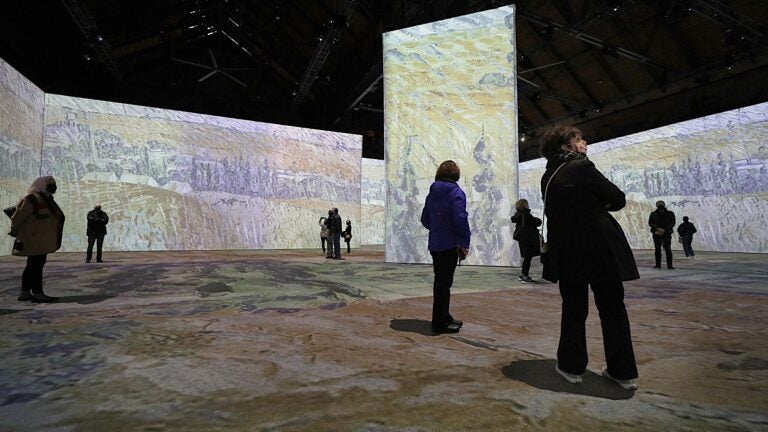