Historically, Sports Illustrated’s annual swimsuit issue has been known for showing skin, and lots of it.

But this year’s edition, which lands on newsstands next week, has a twist: It will be the first to feature a model dressed conservatively in a hijab and a burkini, the full-coverage swimsuit worn by some Muslim women that leaves only the hands, feet and face exposed. Halima Aden, a Somali American model who was born in a refugee camp in Kenya, “has proved that there is a place for modest Muslim women in the fashion industry,” the magazine announced on Monday, declaring that the 21-year-old would be “making history.”

For Aden, that’s nothing new. Her modeling career got a jump-start after she defied expectations by entering the Miss Minnesota USA pageant in 2016, hoping to prove that observant Muslim women who wear headscarves aren’t being oppressed. Though she didn’t win the competition, her striking looks and broad smile caught the eye of fashion industry veterans, and within a matter of months she became the first model to appear on the cover of a major American magazine while wearing a hijab.

“I was tired of the images I was seeing,” she told the St. Cloud Times in 2016. “I never fit that stereotype of beautiful, but when I noticed other people weren’t challenging that or representing me, I thought, it doesn’t hurt to be the first.”

Halima Aden makes history as the first model to wear a hijab and burkini for Sports Illustrated Swimsuit: https://t.co/8WFD4hHmiH. pic.twitter.com/OsBthnjoLY

As recently as two years ago, Aden was still wearing braces and cleaning hospital toilets, and her stratospheric rise was in no way predictable. Before Somalia was ruptured by civil war in the 1990s, her family lived in a small town outside the city of Kismayo, where they raised camels, goats, and sheep. By 1993, she told Vogue, the violence had intensified to the point where her family felt they needed to escape. Her parents made the 11-day trek to Kenya on foot, settling at the Kakuma Refugee Camp, where she would be born four years later. Food and water were scarce, causing fights to break out, though Aden has insisted that her early life in the refugee camp wasn’t that bad.

“We had this sense of community,” she told “CBS This Morning” in 2018. “And my mom moved us around the camp to make sure like we felt comfortable with the other people that were living there. And she wanted from an early age for me to be accepting of differences and different cultures and I think that has a lot to do with who I am today.”

When Aden was 7, her family immigrated to the United States, initially arriving in St. Louis in 2005. It was the lowest period in her life, she later told the St. Cloud Times. Unable to speak English, she had no idea what was going on at school, and none of the other students spoke to her. The following year, her family moved to a suburb of St. Cloud, Minn., which is home to a large Somali community. Though she was teased mercilessly for wearing a hijab in middle school, things gradually started to look up. As a teenager, she became the first Somali student – and, as far as anyone could recall, the first Muslim woman – to be elected homecoming queen at her high school.

“I saw how even something as small as that brought my community and my school together, how it encouraged other girls like me to join student government and clubs,” she later told Vogue, recalling that other girls who wore the hijab “were coming up to me and saying, ‘Oh, I want to go to prom’ or ‘How do I get into orchestra?’ Stuff that I had no idea about, but they were still coming to me for advice.”

In September 2016, a Somali man went on a stabbing rampage at a St. Cloud mall, injuring 10 people before he was fatally shot by an off-duty police officer. Then a freshman at St. Cloud State University, Aden attended a unity rally on campus that was intended to highlight the city’s commitment to diversity amid a period of racial tension. Standing next to her was a white woman whose curious baby kept trying to grab her hijab. Rather than get annoyed, Aden turned to play with the boy, smiling and offering him her hand. A Star Tribune photographer snapped a picture right at that moment and it “went viral,” Aden later recalled in an interview with “CBS This Morning.”

Her journey to stardom began in earnest two months later. In November 2016, she became the first fully covered Muslim woman to compete in the Miss Minnesota USA pageant, matching her hijab to her floor-length evening gown. During the swimsuit portion, as her blonde Midwestern rivals posed in skimpy bikinis, she sashayed onstage in a dark blue burkini and platform heels to uproarious applause.

“I wanted people to see that you could still be really cute and modest at the same time,” she told the Star Tribune.

Her mother had initially been skeptical, telling the paper that Aden’s modest burkini was too revealing and she would rather see her daughter focus on school. Eventually, though, she came around and agreed to attend the pageant.

“My mom was so proud!” Aden told the St. Cloud Times afterward. “She was a little shocked when she saw the bikinis and stuff, because she’s not used to that, and some of my other relatives who are older were like, ‘Aah!’ But I wanted them to see, it’s the American lifestyle. I want to embrace all sides of us. On one hand you are Minnesotan, but on the other hand, you are still Somali. It’s great to see both those worlds intermingle.”

Though Aden didn’t make it past the semifinals, news outlets worldwide picked up on the story. The 19-year-old was subsequently bombarded with messages from other young Muslim women thanking her for her bravery, even as some critics told her that she had gone against Islamic law by participating in the pageant. Others insisted that her burkini and hijab were symbols of oppression – an argument that she had little patience for, since she had entered the competition to demonstrate that wasn’t the case.

“I’m not forcing my hijab on others, I’m not even preaching my religion; I’m literally just wearing a swimsuit that I feel comfortable in,” she said in an interview with the St. Cloud Times. “If you think that’s so horrible and that threatens you, that’s a you issue. I’m not going to make it my problem.”

The criticism demonstrated how women are held to an impossible standard, she added. “I’m covered up, but I’m still getting these comments that say I shouldn’t be. But the girls who wear the bikinis, they’re being told they’re too revealing! Enough. It’s their body, their choice.”

As it turned out, modeling scouts were also taking note. Shortly after the pageant, Aden was signed by IMG Models, a prestigious agency representing some of the biggest names in the business, and landed her first magazine cover. In February 2017, she walked the runway for Kanye West’s Yeezy Collection at New York Fashion Week and appeared in Italian fashion shows for Max Mara and Alberta Ferretti in Milan. Photo shoots for Harper’s Bazaar, Allure and Glamour soon followed.

As Vogue pointed out, Aden’s meteoric rise coincided with President Trump’s decision to limit refugee admissions and suspend immigration from six majority-Muslim countries, including Somalia. But fashion editors and creative directors cited her striking looks as the main reason for casting her, not the desire to make a political statement. Some pointed out that it was time for the industry, which has been criticized for its lack of diversity, to have models that matched its customer base.

“If you walk down a top-end shopping street in any major city, you wouldn’t be surprised to see a Max Mara coat worn with a hijab,” Ian Griffiths, the label’s creative director, told Vogue. “So why shouldn’t our runway reflect that too?”

“I never really felt represented because I never could flip through a magazine and see a girl who was wearing a hijab.” #ShatteringPerceptions pic.twitter.com/EtNfpszcmy

The push for greater representation and diversity has also led to changes at Sports Illustrated. In recent years, Vogue reported, the magazine has sought to make the swimsuit issue more inclusive with the use of plus-size models and others who don’t necessarily conform to traditional beauty standards. “At SI Swimsuit, we strive to continue to spread the message that whether you are wearing one-piece, a two-piece, or a burkini, you are the pilot of your own beauty,” the magazine’s Monday announcement declared.

Some conservative commentators were unimpressed: An opinion column in Townhall suggested that a model who had posed in a nun’s habit on the beach “would be called a prude and accused of sending the wrong message to women about how they should be allowed to celebrate their bodies.” Meanwhile, the Sports Illustration swimsuit edition’s social media accounts received no shortage of enraged replies.

Others saw the photo shoot as something to celebrate. Glamour described it as “a major step for representation of modest fashion,” while HuffPost declared that it “goes much deeper than any changes we’ve seen in the magazine up until this point, especially when it comes to speaking to younger readers.”

For her part, Aden has credited her unexpected modeling career for giving her a platform that she can use to combat widely held prejudices.

“Muslims make up only about one percent of America, so it’s a very small group and there are plenty of stereotypes about us – we’re not often portrayed as people doing good things,” she told Glamour in 2017. “I want to change that.” 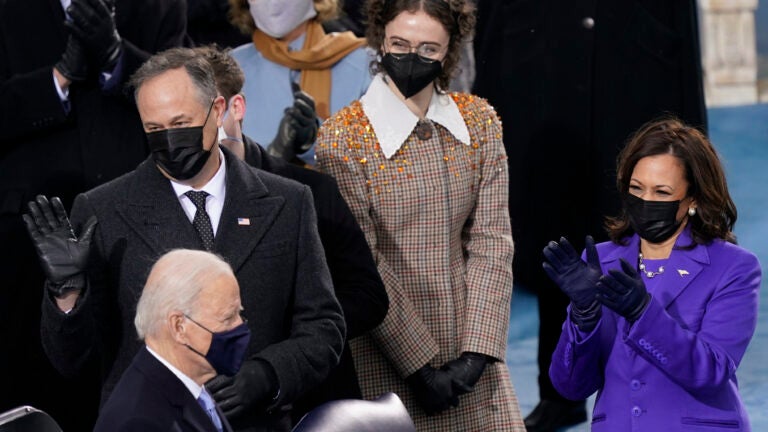