Rob Adams allegedly promised bourbon fans something most could not get: easy access to the good stuff.

The nation has been on a decade-long bourbon binge, making the rarest bottles increasingly unobtainable. Aficionados drive cross-country, shell out thousands and have even traded boats for brown water.

“Right now my group members know exactly where Weller 107 is going to be dropping Monday and Tuesday. No one else knows this but me,” Adams teased members of a bourbon group on Facebook in a message obtained by The Washington Post. “I have inside sources. . .I’m offering 100% moneyback guarantee.”

The price for details about which state-run liquor stores in Virginia would get the hot bottle? $20 a month, according to the Facebook post.

It was, prosecutors allege, a true inside job.

In an unusual criminal case unfolding outside Richmond, a former employee of the state’s Alcoholic Beverage Control Authority (ABC) has admitted to working with Adams to sell distribution information that would allow bourbon fans to scoop up the limited supply of choice bottles.

Adams, 45, has been charged with embezzlement and other felonies. His attorney said his client did nothing illegal. The ABC employee, Edgar Garcia, 28, pleaded guilty Monday to illegally copying government data, telling a judge he was “deeply sorry.” Garcia received a suspended sentence.

The alleged scheme has exposed just how frenzied the hunt has become for the rarest bourbon. Collectors say big money can be made by reselling bottles on a booming – sometimes wild – black market, where prices can reach three, five or 10 times the shelf price.

Greed, scams and occasionally crime have become part of that world. Distillery employees filched more than $100,000 of the most famous name in rare bourbon, Pappy Van Winkle, to resell, a 2013 caper that has been dubbed “Pappygate.” Other scofflaws are refilling empty premium bottles with cheap hooch and passing them off as the real thing.

A class of profiteers, known as flippers, are buying out stocks of elusive names with no intention of consuming them. They’re looking to make a quick buck – or a thousand – by illegally hawking them on private social media pages, the back alleys of the bourbon scene. Fans are hoarding, worried about when their next score might come.

“There’s a joke that no one actually drinks the bourbon anymore. That’s not quite true,” said Aaron Goldfarb, an author who has chronicled bourbon’s rise. But then he paused. “I did write a story this year about a guy who spent $400,000 on bourbon and he’s sober.”

The quest for bottles

The hunt for rare bourbon had reached a fever pitch in Virginia.

One fan described camping out for nearly 24 hours outside a liquor store for a shot at a bottle of George T. Stagg bourbon last November. The man and his friends set up tents and chairs and wrapped the entire camp with plastic to ward off a 15-degree chill.

Others said they hired bourbon “mules” to stand in line before stores opened, or followed delivery trucks from store to store to get the first shot at whatever was inside.

It was in this world that prosecutors allege Adams and Garcia made their plan last fall. At the time, the ABC, which has the sole authority to sell liquor in Virginia, used an internal list that laid out which stores would get which rare bottles. It was essentially a road map to the best stuff.

David Stock, an assistant Commonwealth’s Attorney in Henrico County who is handling the case, alleged in an interview Garcia and Adams met in social media bourbon groups.

The investigation concluded Adams learned that Garcia was an employee at the ABC, Stock said. As a retail specialist making $16.53 an hour, Stock said Garcia had access to the internal list guiding the distribution of Angel’s Envy Cask Strength, Old Fitzgerald 17-year Bottled in Bond, WhistlePig 18-year Double Malt Rye and other sought-after bottles.

“They said, ‘Why don’t we make a little money on the side,’ ” Stock alleged in an interview.

Stock said during Monday’s hearing that Adams paid Garcia $600 for access to the list and promised him bottles of alcohol.

Adams set up a private Facebook page, where he is accused of distributing the list for a fee, Stock said in an interview. The price for access varied, but Stock alleged it hovered around $300.

Bourbon fans said Adams aggressively marketed the exclusive information, posting about it in a number of Facebook groups where bottles are bought and resold.

Stock said he found 25 members who joined the group, but Adams claimed to have 96, who were paying $400 each for access to the list at one point just months after the enterprise launched, according to a screenshot of a social media post by Adams obtained by The Post. If accurate, that would add up to nearly $40,000.

Vaughan Jones, an attorney for Adams, said his client did distribute the list, but did not commit a crime because he had no legal obligation to keep the information secret.

“My client was never an employee of ABC,” Jones said. “He never accessed the information. He was just giving it out.”

Adams appeared unconcerned about getting caught.

He claimed he had an “insider” at the ABC – on the ABC’s own Facebook page – and wrote in another Facebook message he was “untouchable.”

“There is absolutely nothing abc or anyone can do to me for selling the info,” Adams wrote in a third Facebook message obtained by The Post. “My insider won’t get caught either.”

That brazenness would come back to haunt him.

The frothy market that allowed the alleged scheme to thrive had been building for more than 10 years, as bourbon shed its stodgy reputation as a tipple for granddad.

Experts point to a host of factors driving what some are calling the “bourbon boom,” from the rise of craft food and drink culture and a renewed interest in cocktails to the influences of “Mad Men” and celebrity chef Anthony Bourdain, who declared his love for Pappy on a show in 2012.

“If God made bourbon, this is what he’d make,” Bourdain gushed.

U.S. whiskey sales have nearly doubled since 2010, according to the Distilled Spirits Council. Since 2016, top-of-the-line brands have seen their profits surge by nearly 130 percent, according to the council. Distillers’ revenue is approaching $5 billion a year.

But rabid fans have a problem. Premium bourbons take years or even decades to age, meaning producers can’t simply pump out more to meet the rocketing demand. One collector recently lamented: “Quite simply, the world is nearly out of old whiskey.”

From that dynamic, a robust black market grew.

In 2014, Powell was hanging out with a friend who had bought a bottle of Pappy Van Winkle 12-year for $35, he said. Powell recalled his friend casually mentioning he could resell it online for $100. Powell was intrigued and soon jumped into the black market with both feet.

It’s illegal to sell liquor without a license in most places, but authorities initially paid little attention to bourbon resales on Facebook. Powell created a group called BSM (Bourbon Secondary Market) and began a meteoric rise to become the Warren Buffett of the bourbon black market.

BSM had more than 55,000 members and had become a freewheeling hub for trading and reselling bourbon in just a few years. Powell said the page was averaging 100 transactions a day with an average price of $200 per bottle. Prices kept climbing.

Powell said some traded guns for bourbon (a practice he said he quickly banned), while others closed deals with boats. He said he was blown away by a $50,000 transaction for a bourbon collection, until he saw another go for $100,000.

“I had a guy message me to tell me he needed to have his wife kicked out of the group because he was getting ready to get a divorce and wanted to unload his bottles for cash,” Powell said. “He didn’t want his wife to know how much his collection was worth.”

Adam Herz, a bourbon fan and Hollywood screenwriter who penned the “American Pie” script, said he noticed something curious around 2016. Empty Pappy Van Winkle bottles were going for big money on eBay.

“Literal pieces of garbage would sell for $200,” Herz said.

Each bottle was individually numbered, so Herz jotted a bunch down one day and then surfed over to Facebook pages where bourbon was being resold. Within five minutes, he said he found one of the numbered empty bottles. It had been refilled, resealed and was being sold as new.

Herz stumbled upon a counterfeiter and alerted fans in the bourbon community. Hunting refillers would become a second job for Herz. By day he was a Hollywood player, but in his spare time he searched the web for counterfeiters, documenting his investigations in forensic detail on Facebook.

Facebook shut down BSM and a host of other pages where bourbon was being resold in 2019, saying they violated bans on alcohol sales. Powell went on to open a bourbon bar and bottle shop in Kentucky.

Facebook’s move came shortly before 46 attorneys general asked Facebook, eBay and Craigslist to stop alcohol sales on their sites in October 2019, saying underage drinkers were buying liquor on them and counterfeit bottles were being sold.

The move chilled the bourbon black market for a time, but new resale groups soon began to pop up on Facebook again, including the ones where Adams was flogging his alleged scheme to sell access to the ABC list.

Something strange was going on at Virginia’s liquor stores earlier this year. Stock said people were walking into stores and telling employees exactly which bottles their location was getting.

“People were wondering: How did they get that?” Stock said in an interview.

At the same time, the ABC had been monitoring some Facebook bourbon groups and became concerned that someone was leaking privileged ABC information, Stock said. The ABC also said in a statement it received tips from the public about the alleged scheme.

Adams is scheduled for a jury trial in December.

Dawn Eischen, a spokeswoman for the ABC, said in a statement the ABC did away with its list and moved to a system of randomly distributing rare bottles to stores and announcing the drops on Facebook to “ensure that every customer has a fair chance at acquiring highly sought-after products.”

Fans say under the new system the best bottles sometimes sell out five or 10 minutes after hitting the shelves in some of the state’s roughly 400 liquor stores. Many take to the state ABC page on Facebook to celebrate triumphs or vent about their inability to score.

One described the dash to stores when bottles drop as “Cannonball Run,” referring to the ’80s movie about a madcap car race. Another said a fistfight erupted outside a store and a third described how a car hit a concrete barrier as the driver rushed to make a buy.

“I’ve seen people squealing tires into the parking lot and running into the stores,” said Clint Spivey, a bourbon fan from Virginia Beach. “It’s like a swarm.”

Few think a couple of arrests in the state will put much of a dent in the black market for bourbon. Blake Riber, who runs the popular blog Bourbonr, said bourbon fans have grown to accept its existence as long as demand outstrips supply for the best bottles. Bourbon has become another asset like bitcoin, pork bellies or NFTs.

“It’s a beast that won’t be tamed anytime soon,” Riber said of the black market. 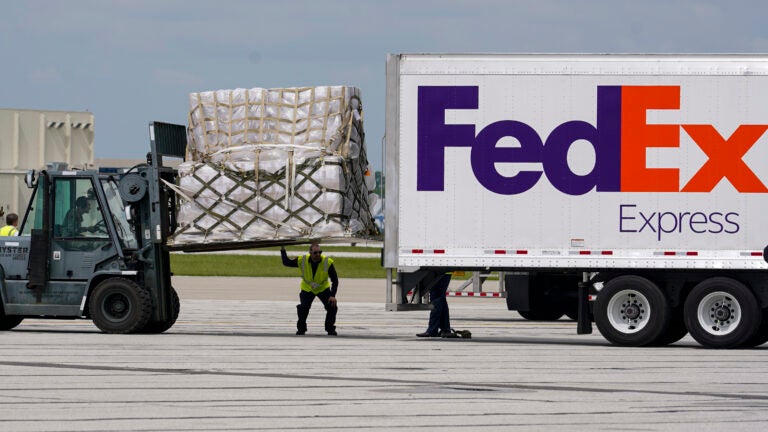 First shipment of baby formula from Germany arrives in Indianapolis