“It kind of protrudes a little bit especially when I smile,’’ said Oliva in the ad sketch. Other women talk only of their flaws: big jaw, too many freckles, fat face.

The artist then gets more flattering descriptions from strangers who spoke to the women only once. “She was thin so you could see her cheekbones,’’ said one, “nice eyes,’’ said another; a third said, “cute nose.’’

The resulting sketches show striking differences: Those based on the strangers’ descriptions were far more flattering than the ones based on the women’s descriptions of themselves. Dove’s message is that “you are more beautiful than you think.’’

I asked clinical psychologist Monica O’Neal, an instructor at Harvard Medical School, what she thought of the commercial. “When I saw it my first reaction was that I thought it was beautiful and provocative,’’ she told me. “I wish there was a way to make it into a real experiment to see if women really underestimate their own attractiveness.’’

We might, for instance, speak about ourselves in a more modest way to others. By the same token, we might be more likely to describe a stranger’s features more flatteringly — especially if we have a positive first impression of them.

“Attraction is influenced by whether a person is nice or likeable,’’ O’Neal said. “But I do think that Dove makes some sort of statement about how women develop sense of self, and I think it’s a successful thing that they accomplish.’’

One criticism I have of the Dove ad is that it portrays women who are pretty, slim, and attractive. But what about women who aren’t?

They may need to develop their own sense of self apart from what other people think of their external beauty, or lack of it. Photography professor Haley Morris-Cafiero came up with a creative way to illustrate how others view her obesity by hiring someone to take photos of strangers gawking at her.

She wrote about the experience and posted the photos in this blog on Salon. The photos are shocking, and the writing is eloquent yet direct.

“Self-criticism is a waste of time.,’’ Morris-Cafiero wrote. “I look worse with tons of make up and products in my hair. I am happy when I am not stressed — so I don’t stress. That doesn’t mean the world is comfortable with how I look.’’ (She’s planning on turning the photos into an art exhibit.)

What do you think? Is Dove making the world look too squeaky clean in how it views women and their beauty? Do you have a better solution in mind than a shaming photo exhibit for fighting our bias against obesity? 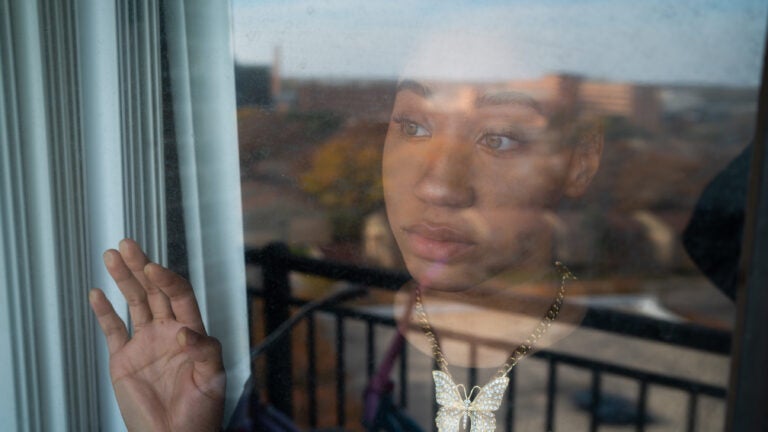