Are you under 50 years old, willing to make daily trips to Medford, and have regular bowel movements? You, my friend, could be earning $40 a day—just for pooping.

All you have to do is visit OpenBiome, launched in 2012 as the only independent nonprofit stool bank in the country. The brainchild of MIT postdoctoral associate Mark Smith, OpenBiome collects, tests, and provides fecal samples to 122 hospitals in 33 states for one of the most interesting medical treatment innovations today: fecal microbiota transplantation. 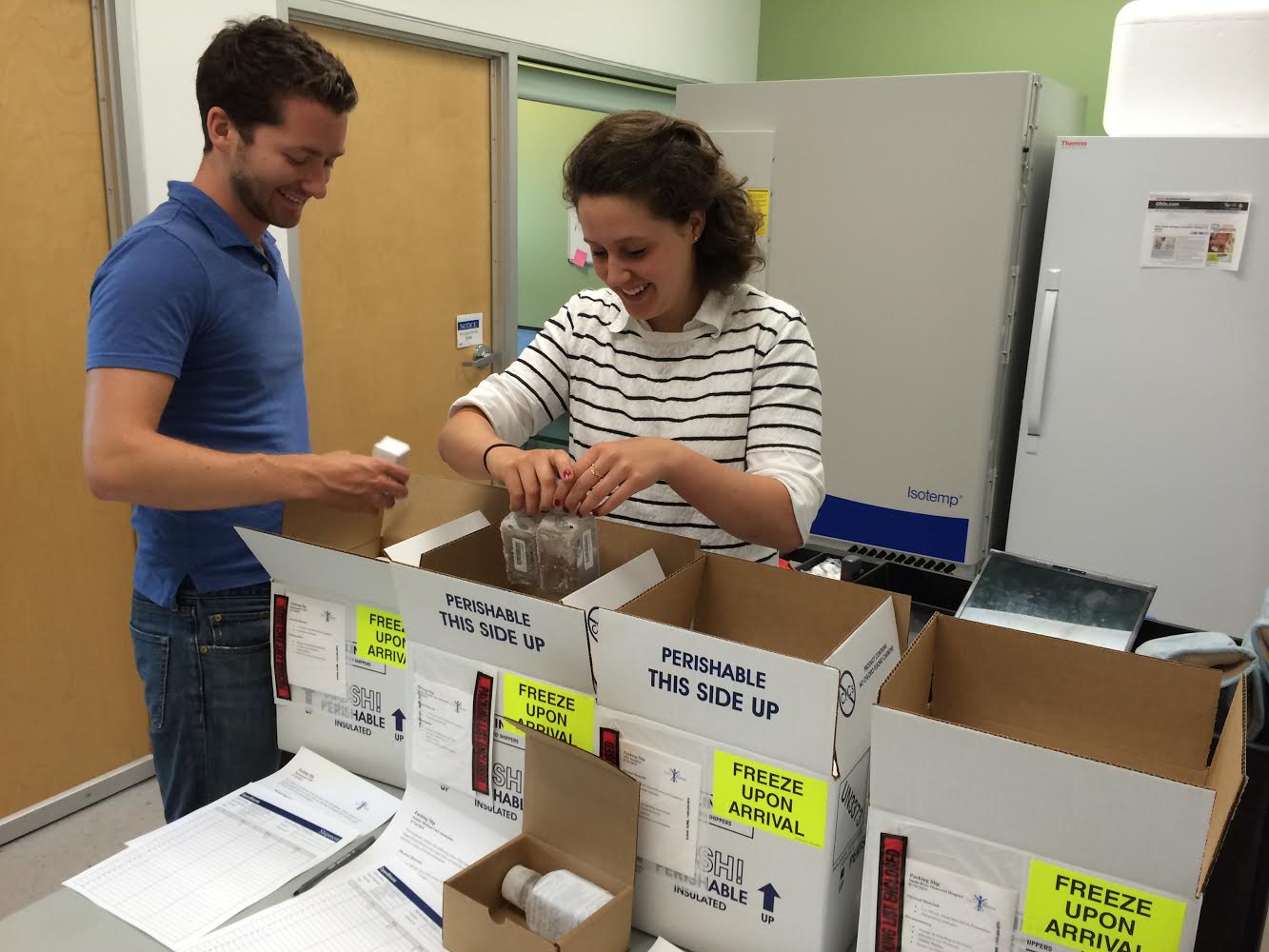 Mark Smith packages the samples for shipment on dry ice with a colleague Laura Burns.

“Think of us as a blood bank, but for poop,’’ said Smith, who developed OpenBiome when he saw the gap in the medical structure to provide many patients with the life-saving fecal samples. “You shouldn’t have to fly across the country to get poop.’’

Smith works with a team of full-time and part-time researchers, graduate students, gastroenterologists, and business minds to ensure that fecal samples are in every city and town and within a two-hour radius for every person who needs them. Smith said that they’ve hit the four-hour radius so far.

Wait, who wants someone else’s poop?

To keep your digestive and immune systems functioning properly, your body needs to maintain a natural balance of bacteria in your gut. But antibiotics taken to treat infections kill both “good’’ and “bad’’ bacteria indiscriminately. They kill it all, upsetting the balance and making the gastrointestinal tract susceptible to C. difficile, a “bad’’ bacteria. The resulting infection, according to the Centers for Disease Control and Prevention, affects more than 500,000 Americans per year, causing fever, nausea, abdominal pain, and serious diarrhea—and kills 14,000 Americans per year, especially in hospitals and long-term care facilities.

There are antibiotics that treat C. difficile, but as many as 20 percent of the infections return.

Our poop, it turns out, is a plentiful source of this good bacteria, and how do you get one person’s good-bacteria-filled poop into an ailing person? A fecal transplant.

“From the cost perspective, it’s a really efficient treatment for patients who aren’t responding to antibiotics,’’ said Smith. Including the donor screening costs, research has shown that fecal transplants save on average $17,000 per patient compared to treatment with antibiotics. 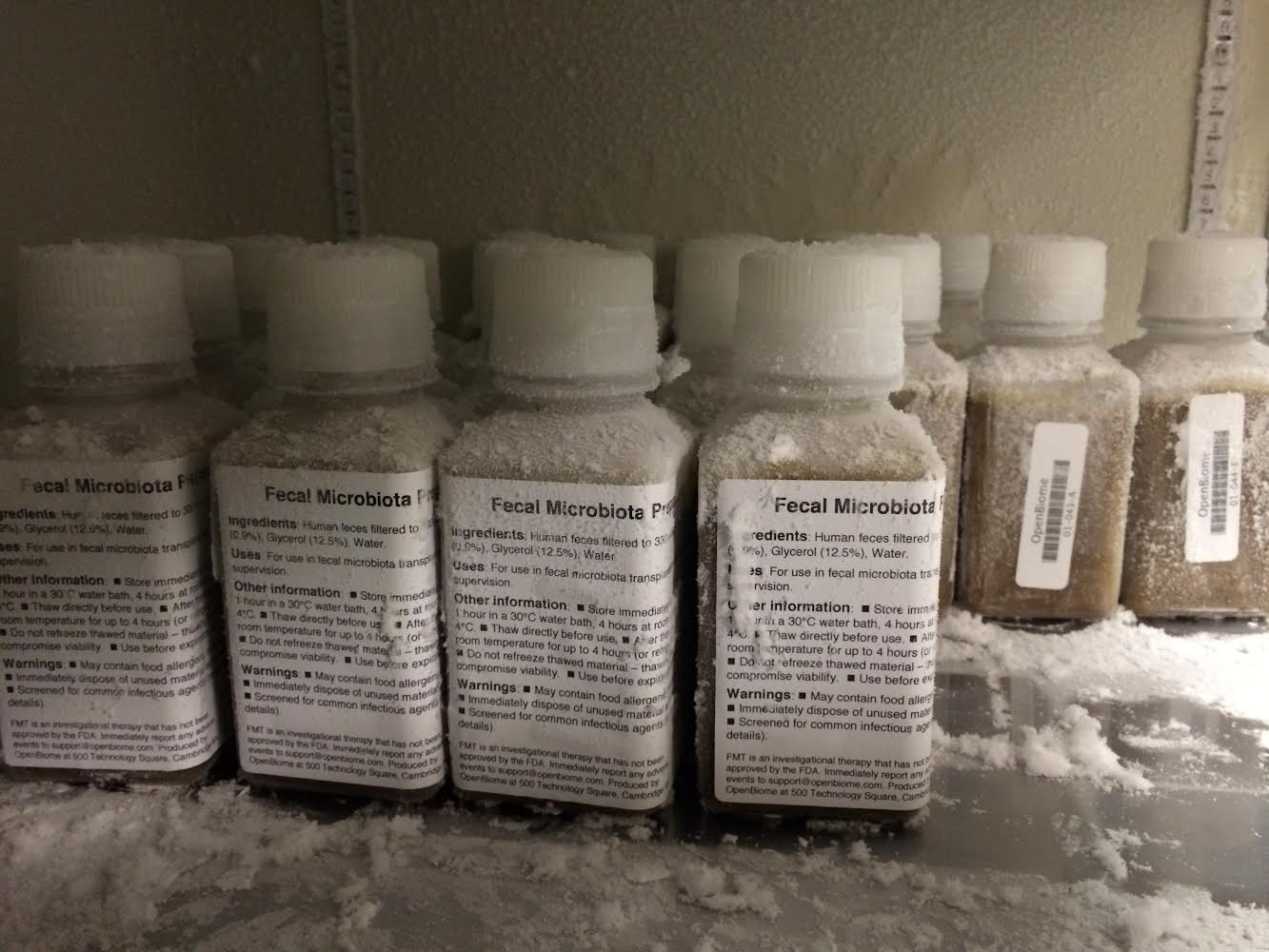 Here’s what a sample of fecal microbiota looks like .

While large hospitals and health systems have their own stool banks, many independent physicians and hospitals often do not. This is where OpenBiome comes in, selling them poop at $250 per sample. That’s one price point for a 250mL sample of fecal microbiota prepared for a lower transplant delivery (yep, that low) or a 30mL sample for an upper transplant delivery (through your nose).

While health insurance companies cover some of the cost, Smith said the price tag is key to paying for the processing and distribution of the samples, finding and screening the donors, while still keeping it affordable for patients paying out of pocket.

“The real challenges is that right now it’s still categorized as an explorational drug by the FDA. Until that changes it’s really not going to find universal adoption because there’s still challenges with how insurance companies reimburse it,’’ said Smith.

Unfortunately, the fecal transplantation process tends to be very uncomfortable and invasive. Physicians traditionally transplant the stool samples through a colonoscopy, enema, or a nasogastric tube that runs from the nose into the digestive tract.

Soon, however, poop may come in the form of a pill. The latest research by doctors at Massachusetts General Hospital, and published in JAMA Internal Medicine in October 2014 has shown frozen capsules of fecal material to be 90 percent effective in treating the C.diff infections. OpenBiome has collaborated with many hospitals across the country in developing and manufacturing these capsule-size samples for treatment.

To become a paid donor to OpenBiome, you have to undergo thorough screenings, from a 120-question health history with a physician to a travel history analysis and, of course, recent use of antibiotics. Once a donor’s sample dump is reviewed by the lab for any infectious agents and the health of the bacteria, the donor’s blood is tested for standard blood borne diseases as well as hepatitis A, B, C, syphilis, and HIV/AIDS. All of these screening costs (which total more than $1,000 per donor) are covered by OpenBiome, so the markup on the poop donations seems pretty reasonable. 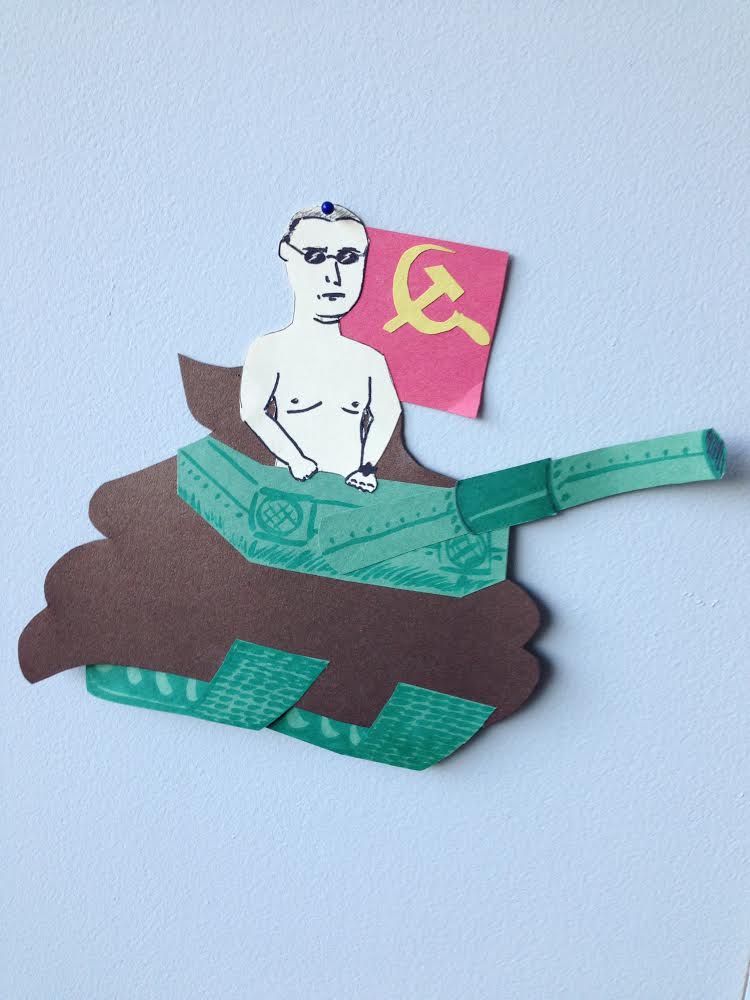 Vladimir Pootin icon, a nickname for one of OpenBiome’s anonymous donors.

OpenBiome targets younger adults, since they tend to be a lot healthier, with the average donor’s age ranging from late 20s to early 30s. The company has also focused its recruitment efforts on nearby Tufts University’s student population.

Once a donor’s sample passes the medical exam, he or she is enrolled and scheduled to visit the Medford facility every day. Each visit takes 30 minutes, during which the donor produces a sample into a hat-shaped bowl that rests over an ordinary toilet. Then the donor walks out with $40.

The cold, hard cash is not, however, the only reward. To further encourage new donors to sign up, and current donors to donate more often, OpenBiome is turning pooping into a game, awarding Super Pooper nicknames—such as Vladimir Pootin, King of Poop, and Winnie the Poo—to those donors with the most samples. (These heroes remain anonymous.) The more doo you donate, the higher your Super Pooper character will climbs in the rankings. So eat your fiber!

“These donors may seem very mild-mannered and think going to the bathroom is a humble thing,’’ said Smith, “but each sample they bring in can treat four or five patients.’’ 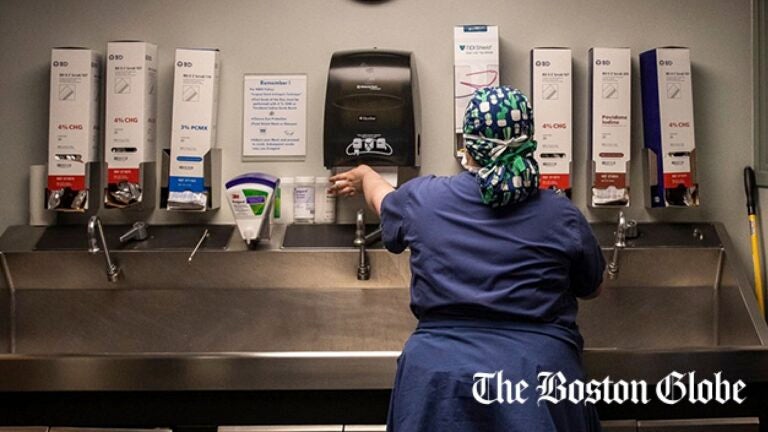 After dozens of children at local hospital test positive for bacteria, tap water found to be the source