5:00 p.m. Hunger overtaking people’s fear of exposure. Despite the quarantine imposed on thousands of people in Sierra Leone, where areas of the country are entirely sealed off, many are having to leave their homes to find food. The United Nations World Food Program, which has been delivering food to those quarantined, haven’t been able to reach all of the homes.

‘‘The quarantine of Kenema, the third largest town in Sierra Leone, is having a devastating impact on trade — travel is restricted so trucks carrying food cannot freely drive around,’’ the Disasters Emergency Committee said in a statement. ‘‘Food is becoming scarce, which has led to prices increasing beyond the reach of ordinary people.’’

3:00 p.m. Now it’s hard to get treatment for anything that’s not Ebola. In Guinea, Liberia, and Sierra Leone, people afflicted with health care issues that aren’t Ebola are having a difficult time finding treatment. The Associated Press reported Tuesday that the World Health Organization is calling this crisis “an emergency within the emergency.’’ Vaccination rates are down and rates of malaria, pneumonia, and typhoid are likely to go untreated.

7:16 a.m. Kaci Hickox’s boyfriend asked to stay off campus: Nursing student Ted Wilbur said the University of Maine at Fort Kent asked him to stay off campus as his girlfriend, Kaci Hickox, was in the news amid attempts to quarantine her after her return from West Africa, according to an Associated Press report.

The university says Wilbur voluntarily agreed to avoid the campus, and the voluntary agreement remained in effect Monday, the AP reported.

Hickox, who believes she poses no danger because she’s showing no Ebola symptoms, fought attempts by the state of Maine to quarantine her.

And here’s your daily reminder not to panic:

The likelihood of contracting Ebola in Massachusetts remains very low, according to the state’s public health officials. You have to be in direct contact with an infected person’s bodily fluids while they are contagious (displaying symptoms of Ebola). Even if someone has been exposed, symptoms may appear in as little as two days, and in as many as 21 days, after exposure. The CDC says the average is 8 to 10 days.

Need more details? Here’s an MGH physician dropping some knowledge for you. 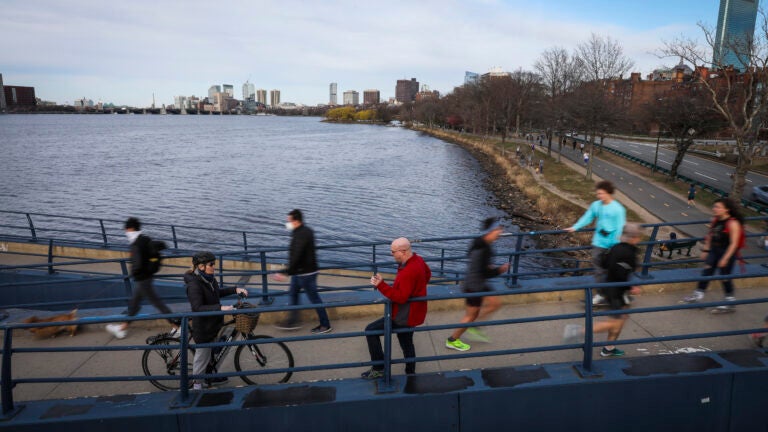 An army of coronavirus tracers takes shape in Massachusetts