If you think working on the medical staff of a single professional sports team would keep you busy, imagine working simultaneously for three.

The Long Island native and father of three talks about his typical day, his six championship rings, and how he came to his senses and stopped rooting for New York.

1. Was it always your goal to go into sports medicine? Are you an athlete?

My dad is an orthopedic surgeon on Long Island. He was the kind of doctor you think about when you think about what it really means to be a doctor. He would make house-calls. I really worshipped him. For as long as I can remember, I wanted to be a doctor. I always thought I was going to be a joint replacement surgeon, but got exposed to sports medicine and really, really loved it.

I don’t play any competitive sports anymore. My brother-in-law tore his ACL recently. It’s such a hassle and such a big recovery. I definitely have limited my own exposure to risk. I don’t ski.

2. You have a number of different titles. Can you describe your current roles?

But it’s not as if it’s just me, in any of those cases. It’s a team. So for the Bruins, I might be a head team physician, but we have dozens of healthcare providers involved with every team.

Yeah. While I’m involved with almost everything, I have at my fingertips dozens of health professionals. It’s not about me and what I do. It’s about a team of doctors and physicial therapists and trainers and nutritionists and concussion specialists.

It’s a full service team. We’ve really handpicked a group of people who are excellent at what they do and have a great attitude. Without that group, I do shoulder and knee surgery, but I couldn’t help with anything else.

It’s this group of talented people who at a moments notice will say, ‘No problem.’ I remember a few months ago, one of the players’ fathers fell down and had a concussion. I called our concussion specialist, and he said, ‘No problem.’ That’s how we operate.

It’s not just when they’re on the field. We deal with any medical problem from any player or their families at any time.

We know these players really, really well. I know them when they get married, when their parents have heart attacks, when they have kids. When one of their wives gets pregnant, they call and say ‘My wife is pregnant. What do we do?’ 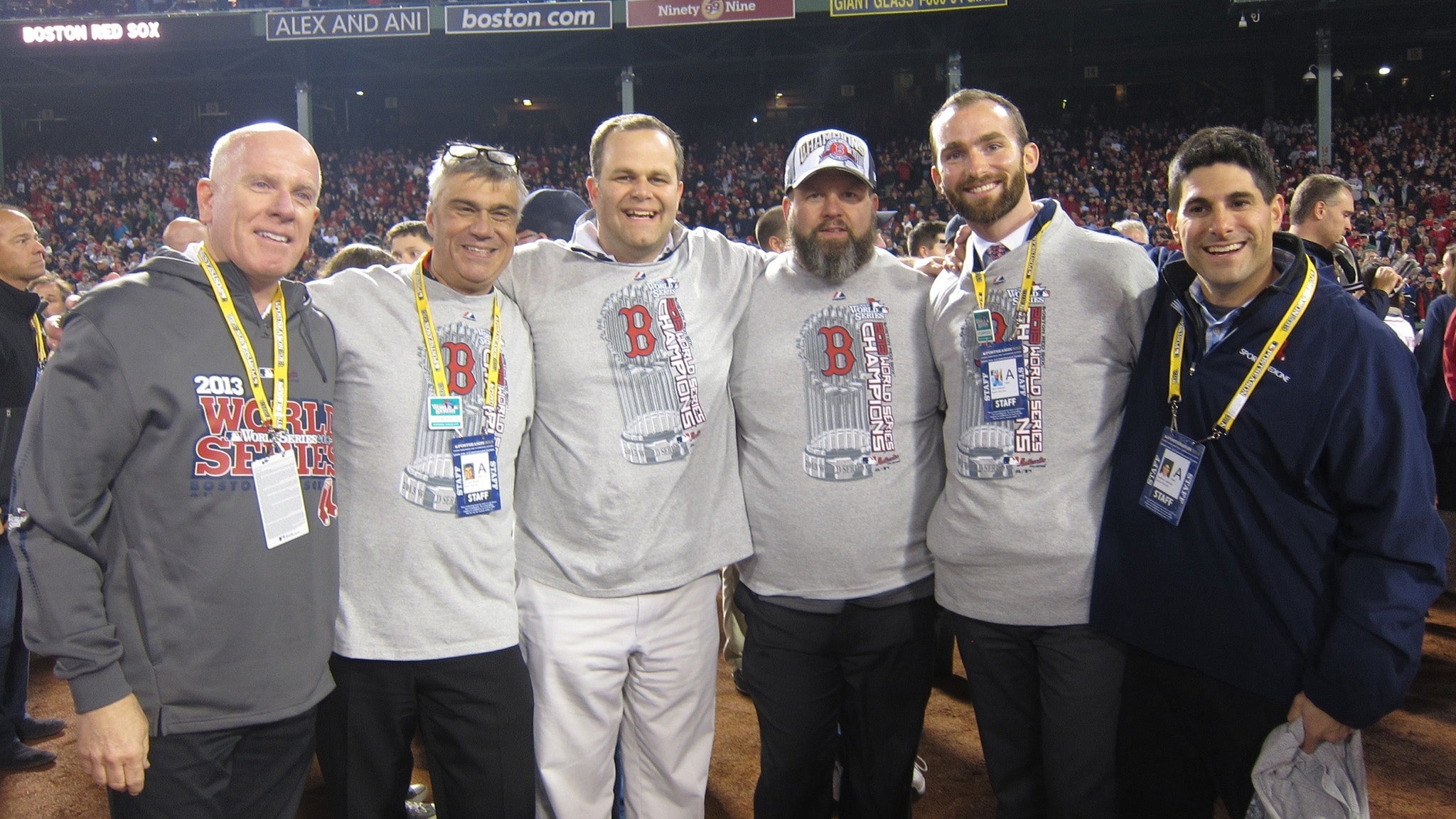 4. As a dad, do you worry about your kids being injured playing sports?

I definitely have always said if they really wanted to play football, I was OK with it. But I didn’t push them in that direction. But they do play hockey.

As a parent you always worry about your kids and injuries with sports, but you get so much out of sports that I think it’s important to encourage them to be involved.

But no question, I was encouraged when my son chose sports with a little less risk.

Growing up, I was a New York sports fan. When I came up to Boston [for college], I experienced the rivalry from the other side.

My wife is an avid Boston sports fan. I remember [in 2003] when the Yankees beat the Red Sox with the Aaron Boone home run — my wife didn’t talk to me for two weeks.

These teams have become a part of my life in a way I never expected. When players get traded or go away, I still get phone calls from them when they get hurt. My wife was diagnosed with breast cancer in 2011. The outpouring of the teams has been amazing, from players and from the front offices. When you get to know the organization and the players, it all really becomes part of your life.

6. Do you find yourself watching games as a doctor as opposed to as a sports fan?

There’s no question I watch games differently than most. By the way someone twists or turns, you can get an idea of what the injury is. 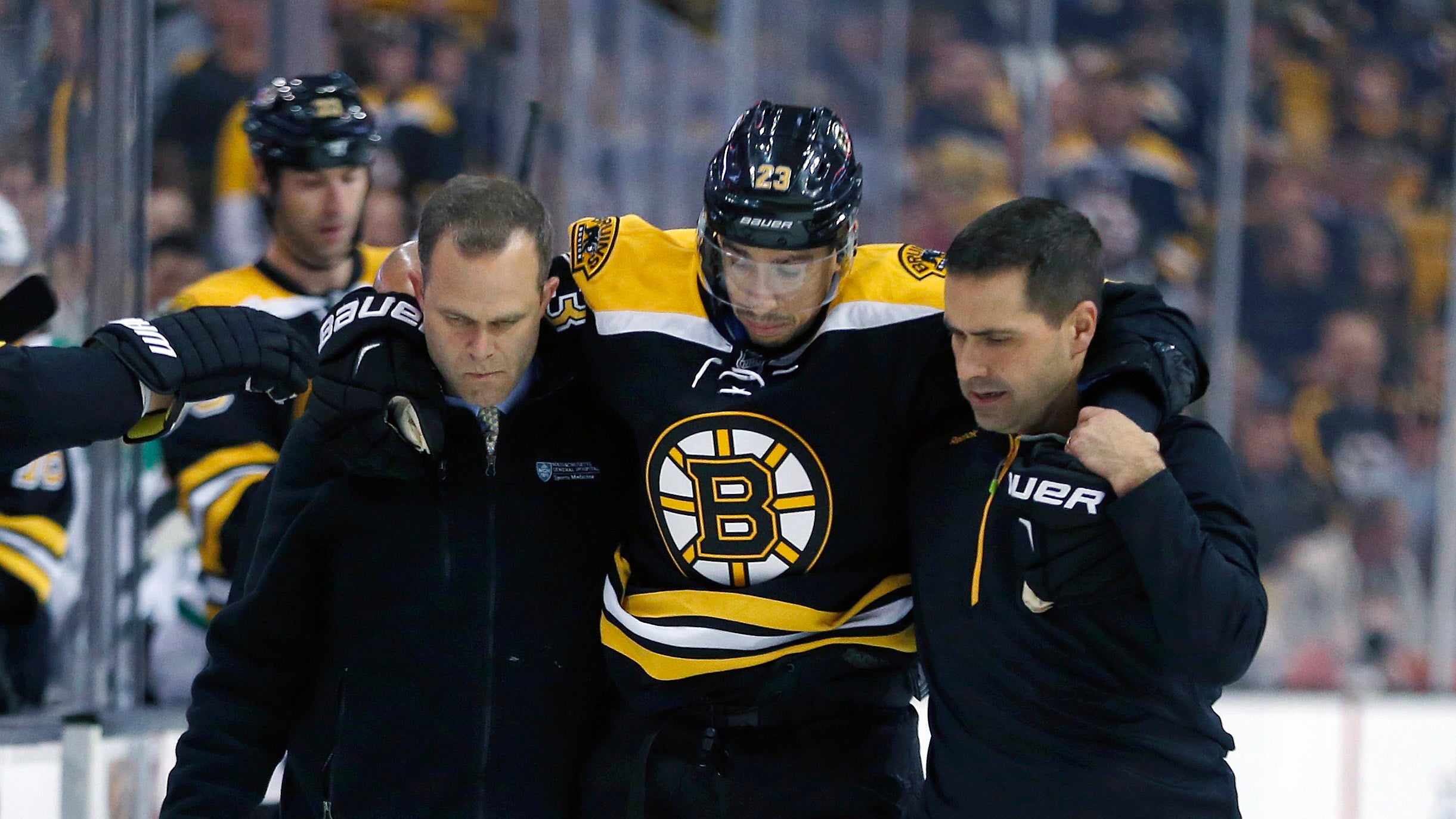 Boston Bruins’ center Chris Kelly is helped off the ice by Asnis (left) and Bruins head physical therapist Scott Waugh (right) after fracturing his femur during a game against the Dallas Stars on November 3, 2015.

7. How much does prevention factor into the types of injuries you treat?

When I see patients in the office, it’s usually after an injury. But I do talk a lot about prevention.

A lot of it is staying fit and keeping weight down. When you carry less weight, it’s so much less of a burden on joints.

We have sleep specialists, nurtritionists, strength and conditioning coaches. They’re focused on preventing injuries. And I think we’re getting much better [at that].

8. Do you have the final say when it comes to how a player injury is treated? How much are the front offices involved in the medical decisions?

The player gets the final say.

I can honestly say that with the teams I work with, I have never felt pressure from ownership or a front office in making medical decisions. Never once.

9. Can you describe your average day? How much is it affected by the teams’ travel schedules?

I get up at 4:45 a.m. on average. And I try to either exercise or walk the dogs. I’m usually at work at 7 a.m. That’s either at MGH in Boston seeing patients, or operating at MGH West in Waltham. Half the time I’m operating, and half the time I’m seeing patients. But throughout the day, I have involvement with any one or sometimes all of the teams.

If there’s a player who needs attention, they will come to see me, or we’ll pick a place to meet, like Fenway Park or the Garden.

We see a lot of free agents. We see them to do a risk assessment to see what their current state of health is. So we’re learning their history, and doing a physicial exam. If there’s a question, we might get an MRI on them. We can get a pretty good idea of their medical history.

On a day where I’m doing surgeries, I’d usually do four to five surgeries.

And then I cover over 100 games a year — mainly Red Sox. So every third night or so, I’m at the Garden or Fenway Park to cover a game. Usually there’s two teams going at a time. Every once in a while, there’s only one team going. During the game, we have seats, but we spend a lot of the game in the locker room. We’re waiting for something bad to happen.

There are times I’m racing back because someone gets cut and they need stitches. We see a lot of stitches in hockey.

With the Patriots, they travel with their team doctors wherever they go. But since I’m not the head team physician, I don’t go to every away game.

With the Red Sox and the Bruins, we only travel with the team during the playoffs. During the season, the opponents’ physicians take care of the team if something happens during a game.

10. Rumor has it you’re the owner of a number of championship rings?