Performing yoga is good for your body and mind, and through Yoga Reaches Out, the practice also benefits the Boston Children’s Hospital.

Yoga Reaches Out is a nonprofit that raises money for children’s organizations through yoga events, like the 2016 New England Yogathon this past Sunday. More than 1,000 people gathered at Gillette Stadium’s Empower Field House at 9 a.m. for the sixth annual full day of yoga and fundraising.

Yogathon participants raise their arms in unison during the first of many ‘sun salutations’ on the turf field inside the Empower Field House Sunday morning.

In order to participate, the yoga enthusiasts had to commit to raising at least $250 to support the Yoga Reaches Out Wellness Center at the Children’s Hospital Hale Center for Families. The center provides programs like yoga, meditation, and massage to the parents and caregivers of children being treated at the hospital.

“Each year, the Yoga Reaches Out New England Yogathon gets bigger and better,” Yoga Reaches Out founder Sarah Gardner said in a statement. “This year’s beneficiary was especially meaningful—we’ve come full circle in a sense, bringing yoga and other supportive services to the families of those being cared for at Boston Children’s Hospital. Now, parents and caregivers will have a place to care for themselves as they care for their children.” 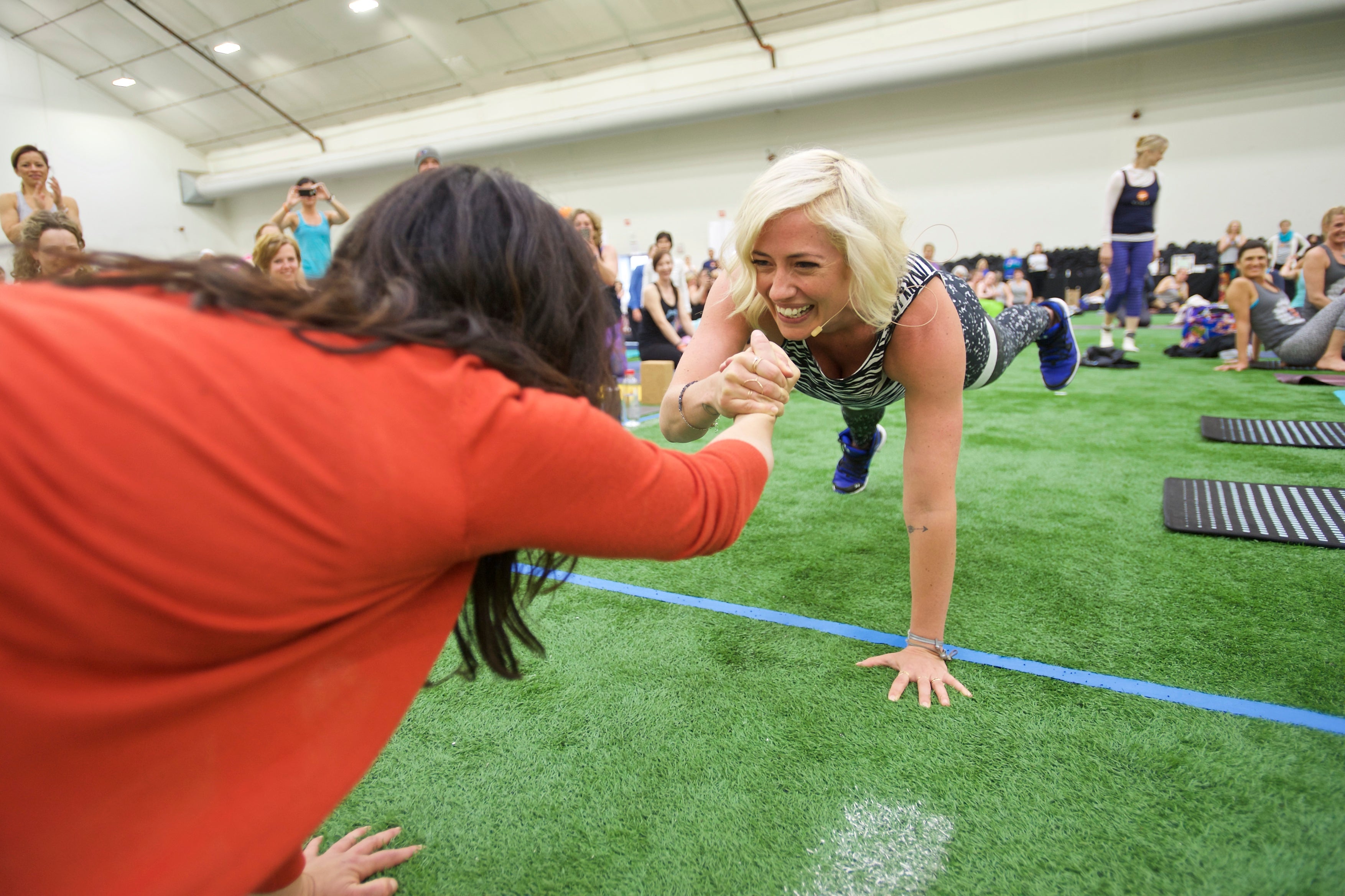 Yogathon lead presenter, teacher, writer, and book author Kathryn Budig holds the hand of a participant as she demonstrates a pose inside the Empower Field House Sunday afternoon.

Sunday’s event included more than 1,000 yogis and has raised more than $300,000 so far, and donations can still be made until June 1. Since Gardner started Yoga Reaches Out in 2010, the nonprofit has raised nearly $1 million for Boston Children’s Hospital and nearly $2 million for other organizations across the country.

And you thought your gym’s classes filled up. 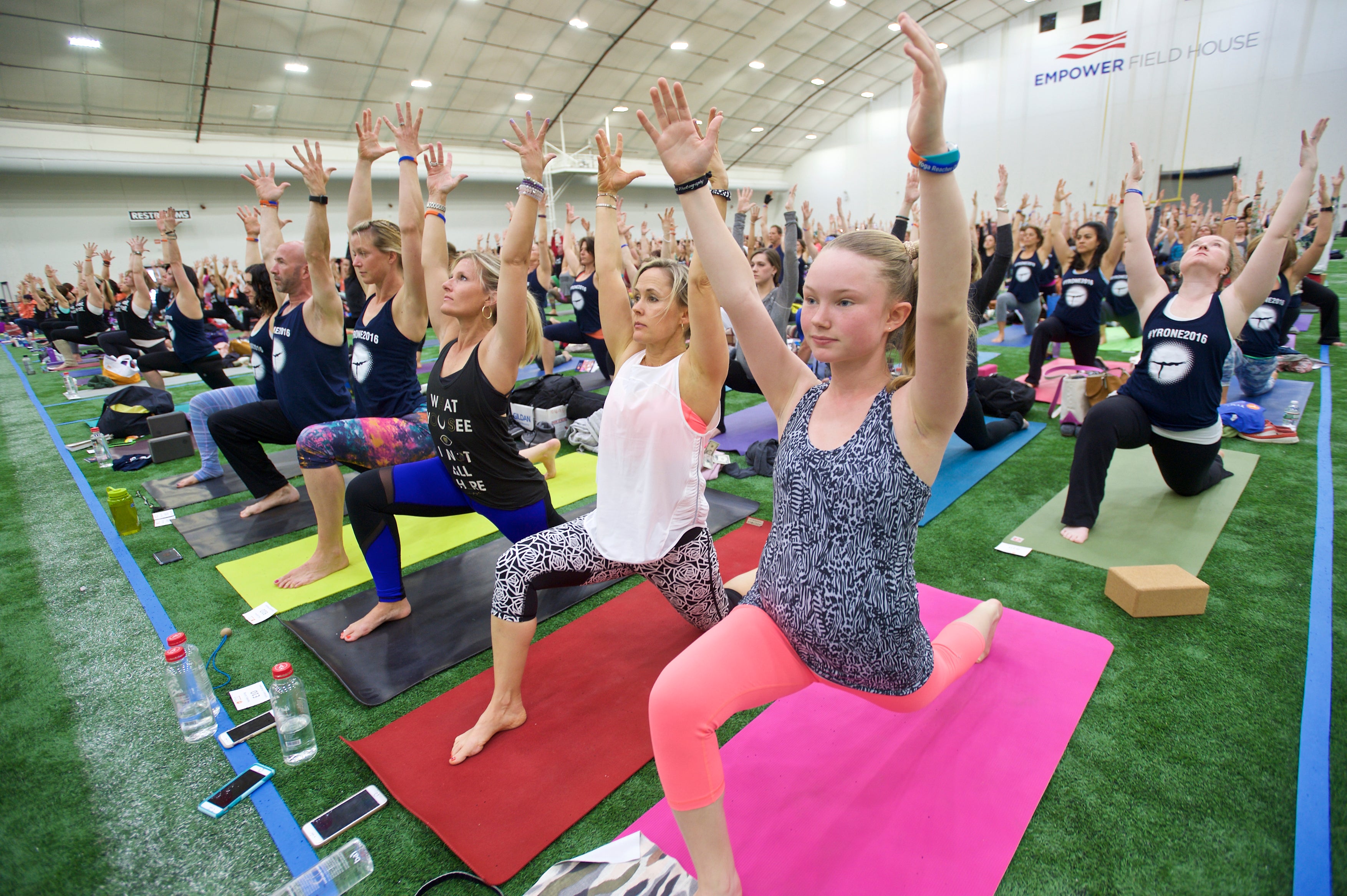 Yoga Reaches Out founder Sarah Gardner, center in white, of Wayland, holds a pose with the entire crowd and her daughter Emma, right, on the turf field inside the Empower Field House Sunday morning. 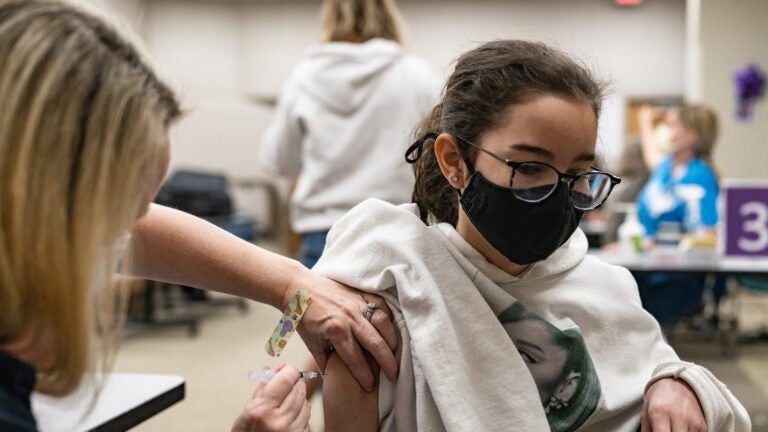