What is it about so many historical photos that feel so… cursed?

If you don’t know, the internet has had a minor obsession with so-called “cursed images” for the last half-decade. That term describes pictures that are not outright scary, but still unexplainably… eerie. Unnerving. Uncanny. Unsettling. Cursed.

The subjects of these images are often mundane or absurd — a baby smiling at a meat grinder, 20-odd badgers swarming a dark backyard, a glass vase filled with spaghetti — but they’re still undeniably foreboding, haunted by an indiscernible specter that simultaneously dares you to laugh and begs you to look away.

Which brings us to New England, a region that is no stranger to the spooky. Earlier this month, the Boston Public Library uploaded over 8,000 historical photos to Wikimedia Commons, the massive collection of free media for use online.

Though the images were already in the public domain and available for free online on Digital Commonwealth, the extensive statewide repository for archival material, the library noted in a statement that uploading them to Wikimedia brings them to an even wider audience. The upload, which the library says is the largest batch ever contributed to Wikimedia, was part of a national effort by the Digital Public Library of America to boost public access to historical materials.

There’s plenty of history to be found in the stash — the BPL highlights photos on the early history of the Red Sox and 19th century daguerreotypes of local abolitionists, for example — but which photos will make you want to run and hide? Between stilted portraiture, dusty and monochrome color palettes, and the mystique of peering into a bygone (and often horrific) era, historical photos are easy candidates for cursed images.

Let’s dive in and see what we can unearth.

The statue in the library You find yourself in a dim and empty room, old tomes lining the walls, your only company a vaguely menacing statue. That loose lightbulb hanging by the side… And what lurks in those distant shelves shrouded in shadow? Whatever you do: Don’t blink.

This cursed image is actually from the Boston Public Library itself. Its collection holds hundreds of images showcasing the construction of the McKim building, the older half of the central branch in Copley Square, before it opened in 1895. It’s a fascinating look at the process behind one of Boston’s greatest works of architecture, but we wouldn’t blame you if you avert your gaze next time you spot Sir Henry Vane in the entrance hall.

The women on the couch 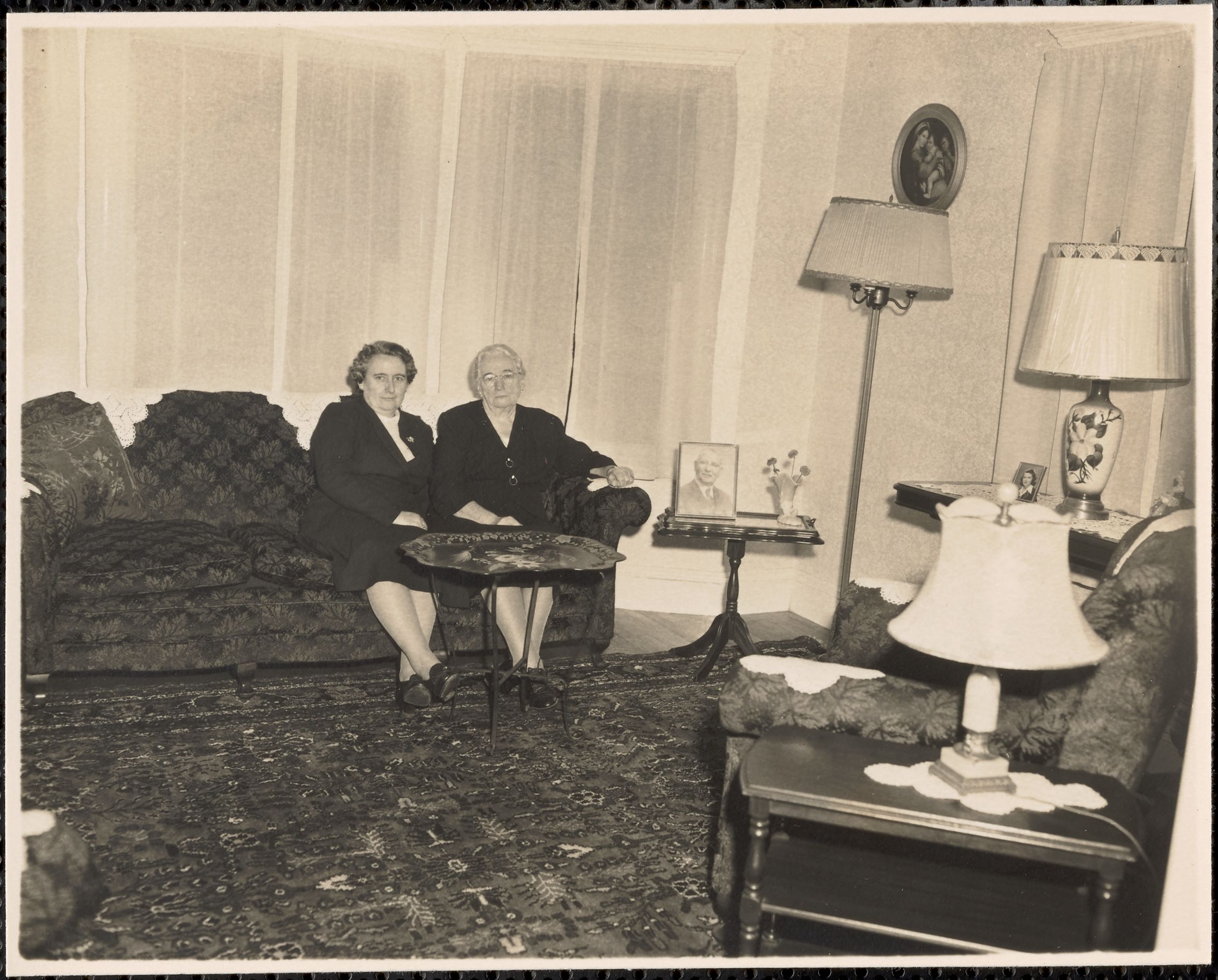 Maybe you don’t see this image as cursed, but look deeper. This is a shot where everything is nefariously lopsided. There’s the ever-so-slight canted angle of the frame. The three dueling lampshades. The void next to the two women on the sofa… space for two people, people who should be sitting there but aren’t. Wait, who is that gentleman in the picture frame? And that young girl by the curtain?

This 1951 photo was taken by Leon Abdalian, a prolific and possibly self-taught Jamaica Plain photographer responsible for countless casual portraits in the library collection, like the definitely-not-a-family-of-ghosts at the top of this article. His work provides a uniquely intimate look into everyday midcentury life in Boston.

The man in the tunnel 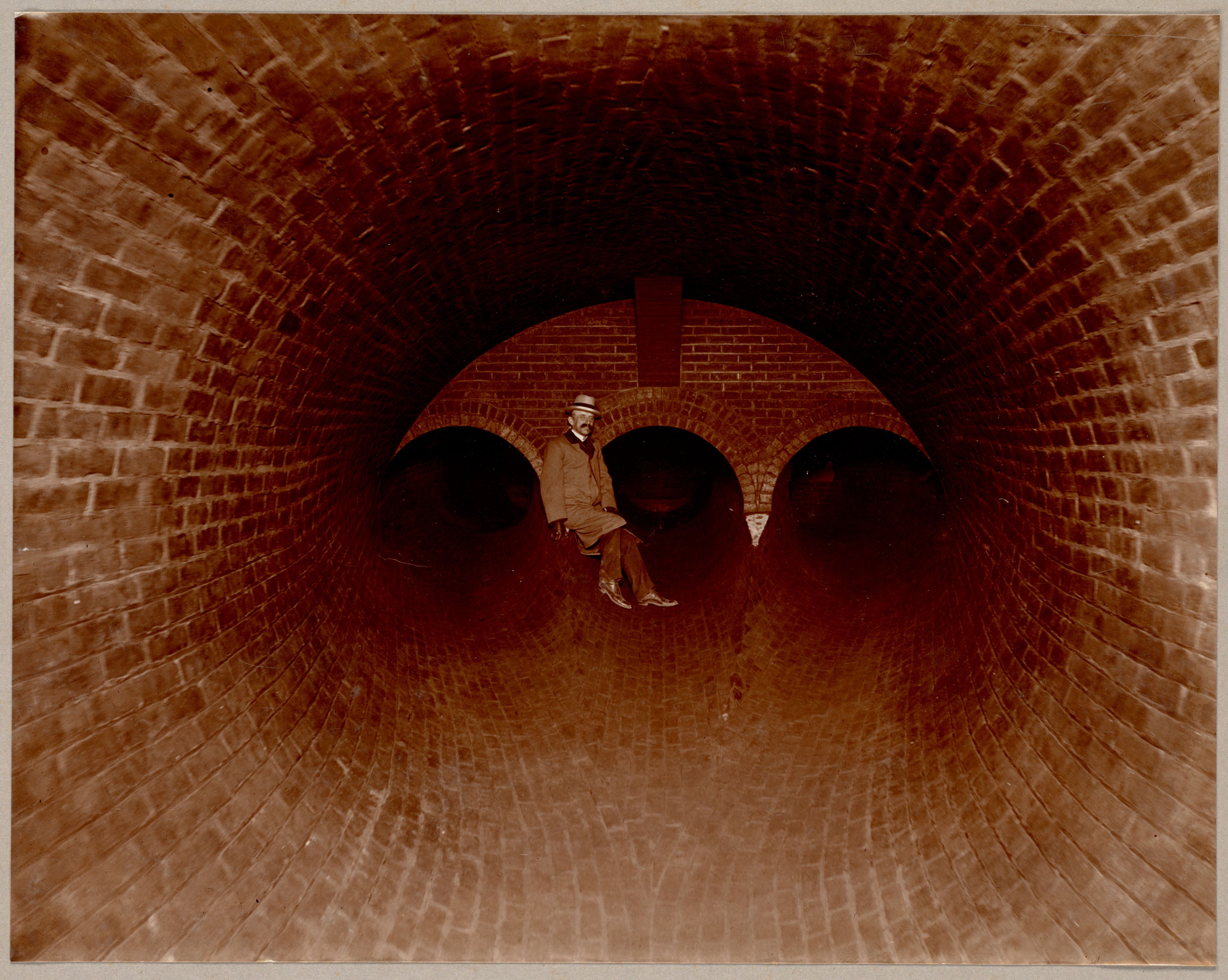 If Stephen King taught us anything, it’s to never trust threatening yet strangely alluring New England men hiding in a sewer.

Another contributor to the library’s collection is Edgar Sutton Dorr, an engineer in Boston’s sewer department in the late 19th and early 20th centuries. His pictures include many personal shots of his friends, family, and travels, along with documentation of his work beneath the streets of Boston, like the 1880s shot above.

The ghost in the tunnel Okay, that’s just a ghost! Edgar Sutton Dorr saw and photographed a ghost in the sewer and you cannot convince us he didn’t! 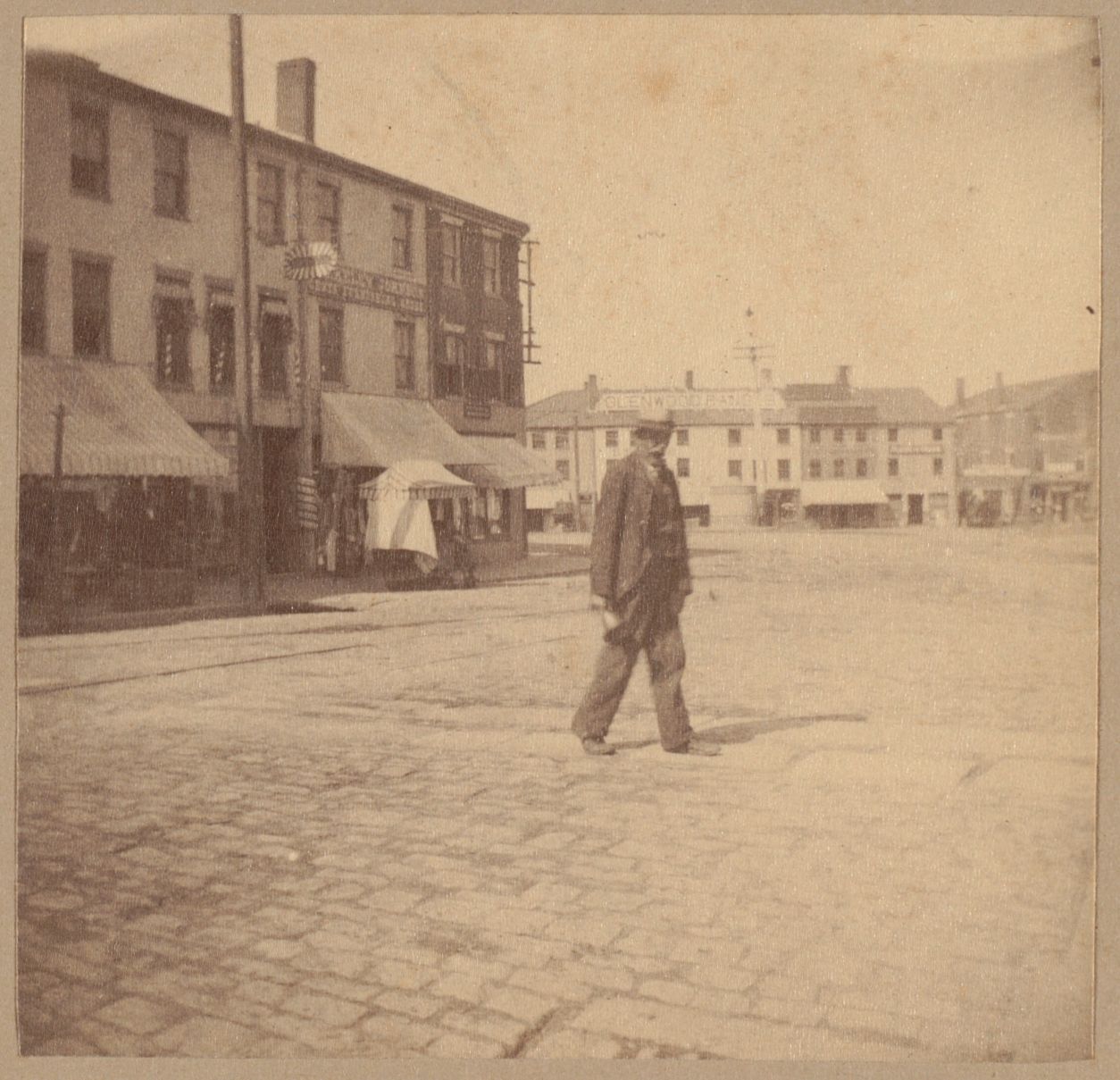 This 1895 print purports to show a town crier in Newburyport. But the town is empty — to whom does the town crier cry? For whom does his bell toll? His face is shadowy and obscured, the features of his countenance blurred and indistinct. He has no mouth, and he must cry. This well-camouflaged baby, photographed by Abdalian in 1951, has either perfected the Freddy Krueger technique of reaching through solid surfaces, or she’s simply doing her best impression of Han Solo frozen in carbonite. Who among us hasn’t sat with the gals to crack open some books in the parlor only to have your lovely reading session rudely interrupted by an amorphous apparition?

The house on the hill 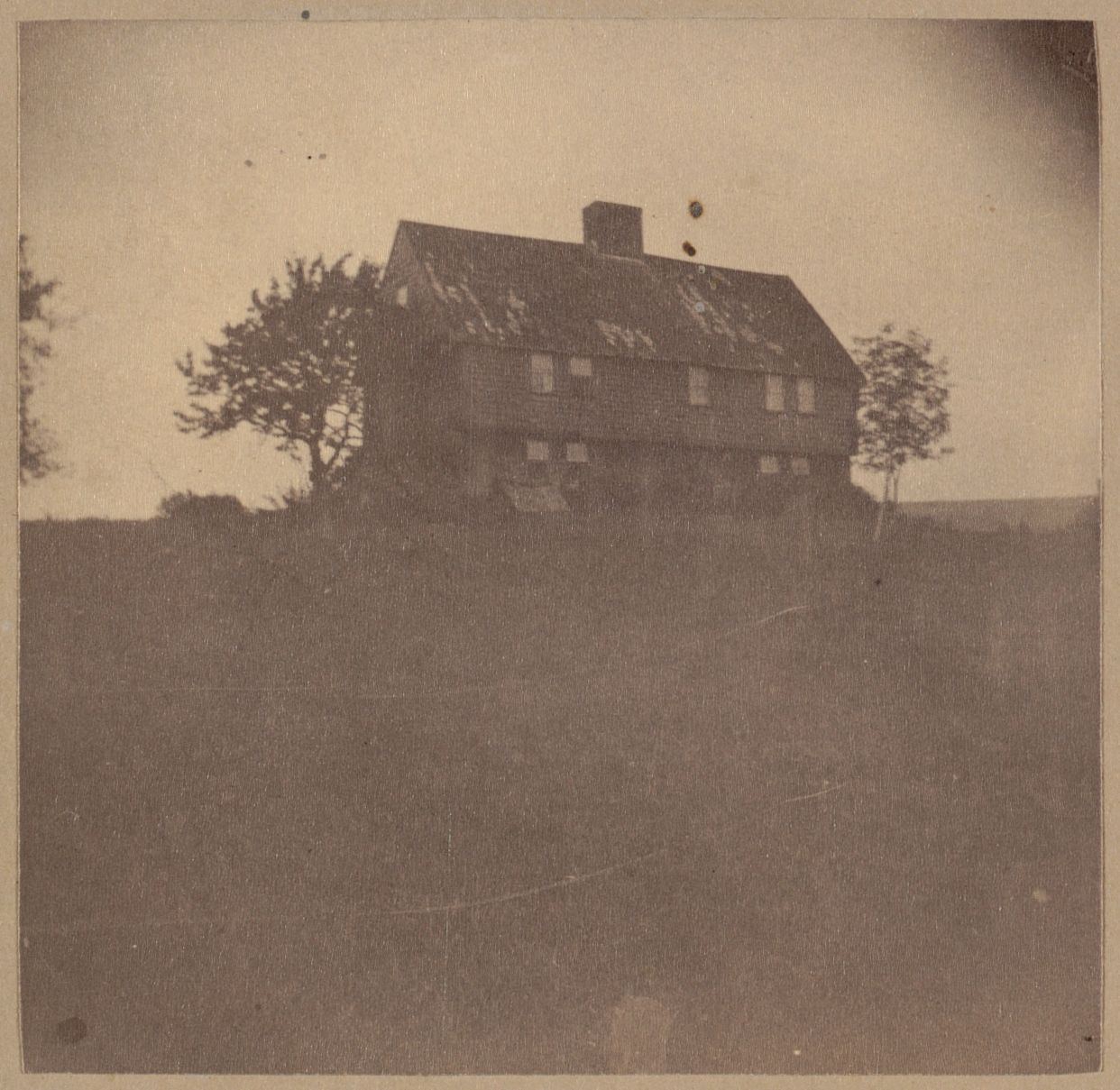 What hidden horrors lurk within this creaky Topsfield home built in the late 1600s, photographed here over a hundred years ago? The cruel and unsightly spoils of the early French and Indian Wars? The remains of people caught in a fervor of colonial hysteria and accused of witchcraft?

Actually, this is just the Parson Capen House, which still stands as a well-preserved example of Elizabethan architecture in America. It was bought by the Topsfield Historical Society sometime after this photo was taken and designated a National Historic Landmark in 1960. You can visit in the summer. 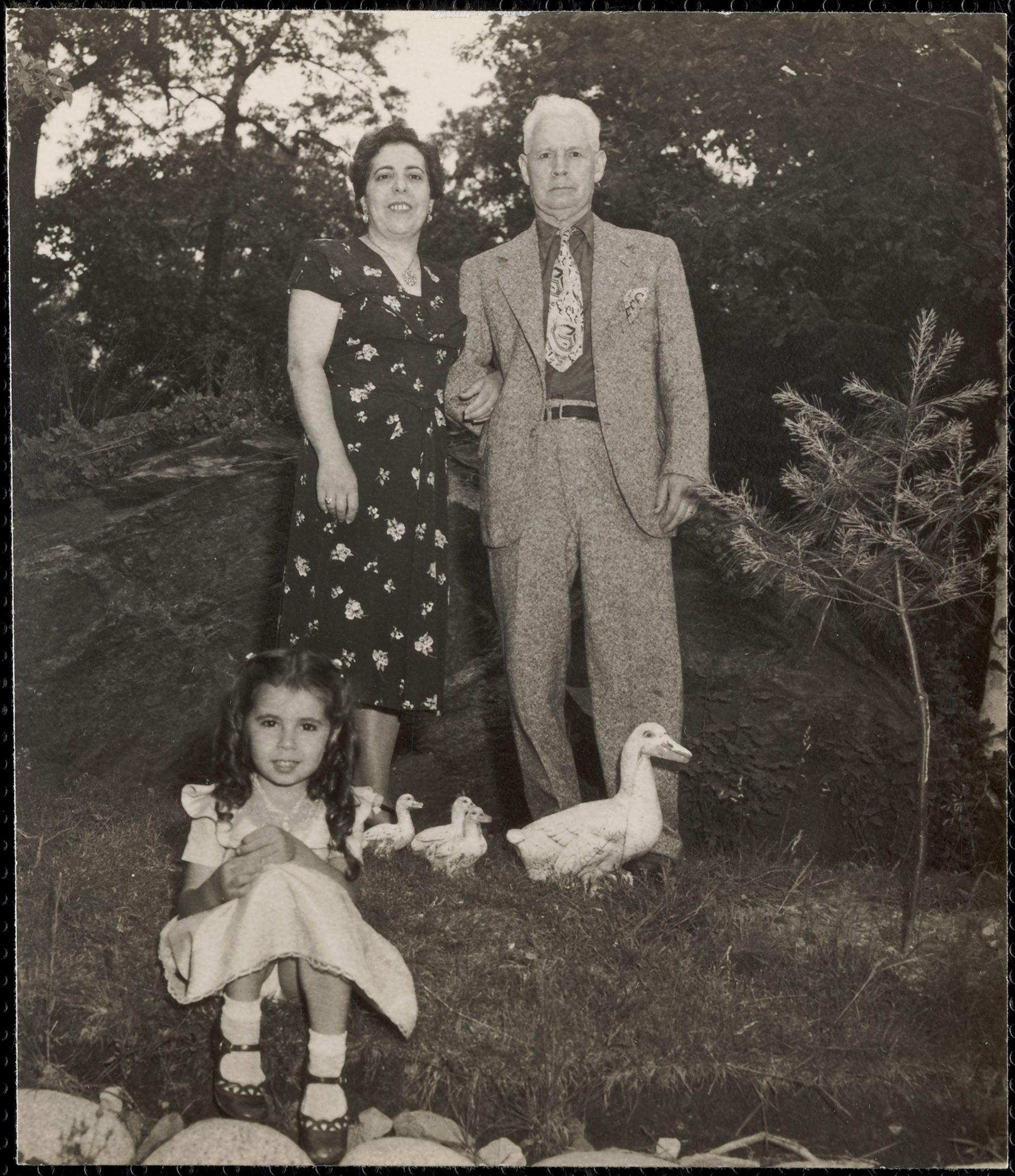 This picture, shot by Abdalian in 1952, would be a lovely portrait of the Mangouney family in Newtonville if not for the wretched and ominous flock of decorative avians in their midst. Alfred Hitchcock’s The Birds was loosely based on a short story published that same year, and we refuse to believe that’s a coincidence.

The man and the fish 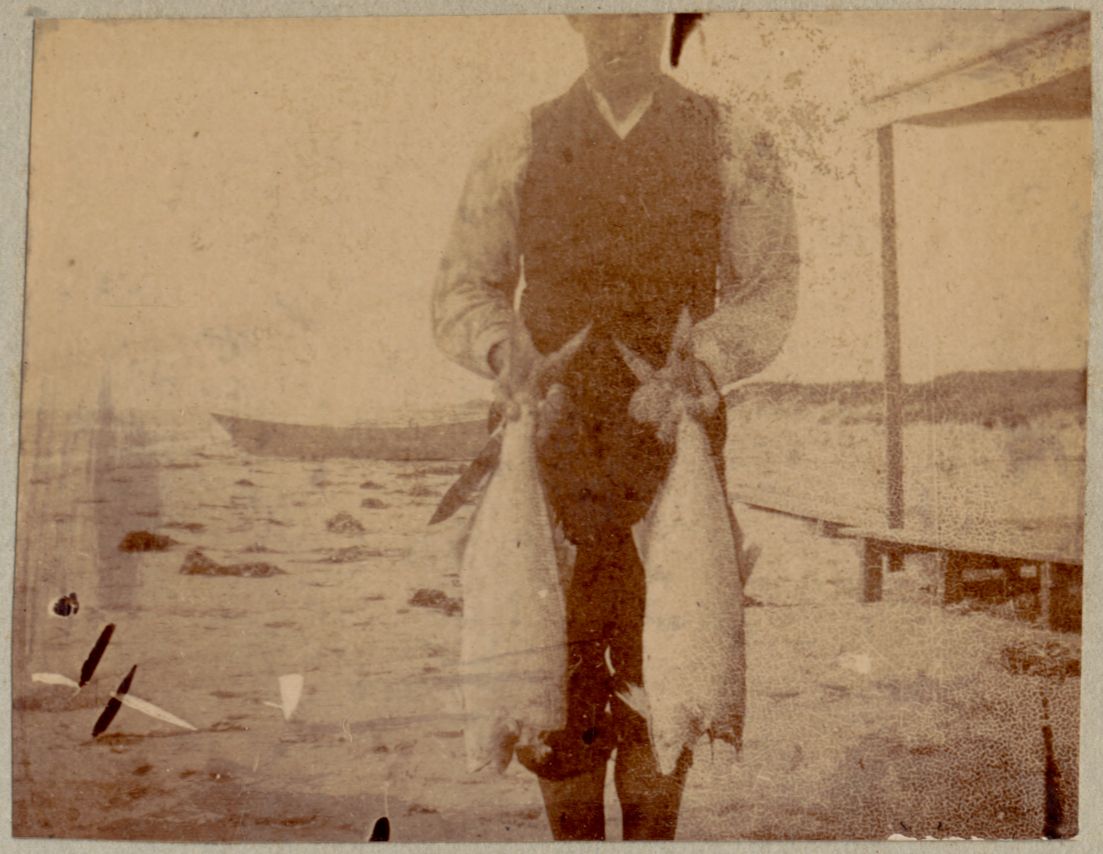 In another Dorr original, shot sometime around the turn of the century, an austere figure stands with a grisly offering — two large fish, beheaded some time ago. But notice the framing of the photo — the top of his head, too, is chopped off. Maybe you’ll be next? 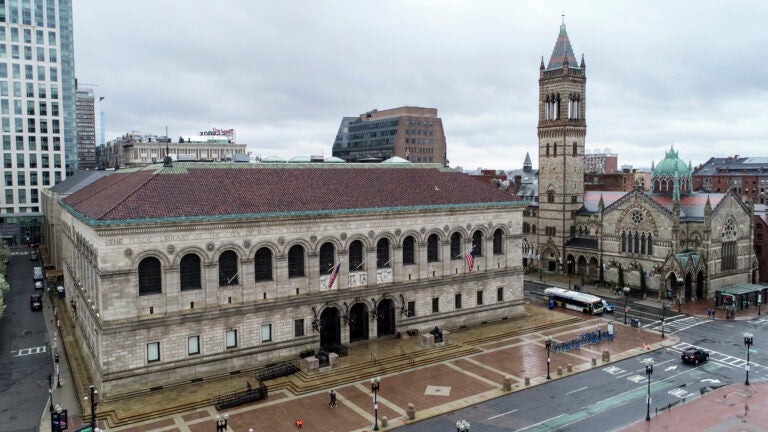