Q. Do root vegetables like sweet potatoes count as vegetables or starches, and is it true that all the nutrition is in the skins?

A. Potatoes have fallen from grace in recent years, as health authorities have argued that starch-filled spuds shouldn’t be counted as a vegetable in the diet. The USDA recently proposed reducing the amount of potatoes served in school lunchrooms. But the attack on potatoes leaves some confusion: Should sweet potatoes and other tubers and roots also be lumped into this category?

Linda Antinoro, a registered dietitian at Brigham and Women’s Hospital, says that when evaluating meals, she and her colleagues consider both the potato and sweet potato to be starches. Like white potatoes, sweet potatoes have a high amount of starch — an abundant carbohydrate found in all kinds of plants — compared to other vegetables, which means that a portion of sweet potatoes has about triple the calories of a similar volume of carrots or other vegetable.

However, Antinoro adds, “we would encourage people to eat a sweet potato rather than other starches.’’ By replacing your white potato, rice, pasta, or bread with a sweet potato, you’re adding a whopping dose of beta-carotene, as well as vitamin C, potassium, and other vitamins and minerals.

If you eat sweet potatoes with their skins, you also get a lot of fiber, which can help keep blood sugar levels from spiking after a meal and may also discourage overeating by contributing a sense of fullness. The American Diabetes Association lists sweet potatoes as one of 10 “superfoods,’’ which carry a high nutrition content without sending blood sugar soaring. While it’s not true that the skin contains most of the vitamins and minerals, it contains a large portion of their fiber. Antinoro says it’s always better to eat fruits and vegetables with edible skins to get the most nutritional advantage from their fiber content.

Other high-starch vegetables similar to sweet potatoes include yams, cassava, pumpkin, and winter squashes (e.g., butternut). Antinoro says that most other root vegetables like carrots, beets, turnips, parsnips, and rutabagas have a lower starch content and caloric density than potatoes and sweet potatoes, and can be counted as vegetables rather than starches in your meals. The overall balance to strive for, she says, is a plate that contains about half vegetables, one-quarter starches, and one-quarter protein-rich foods. 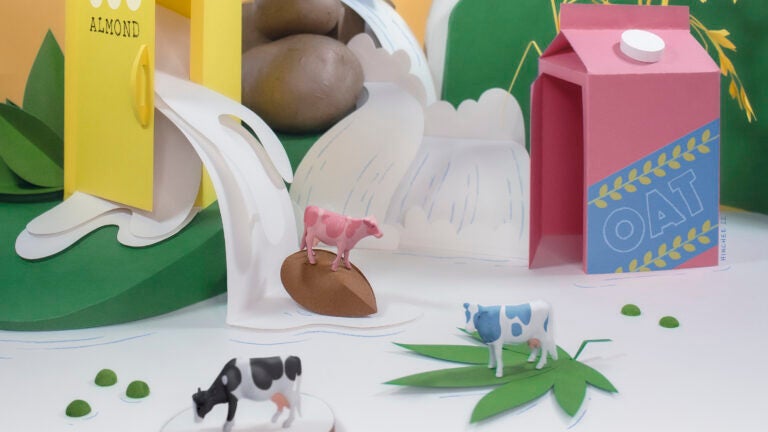 Have we reached peak plant milk? Not even close.