July 4, 1984 was just like any other Independence Day in Boston. John Williams conducted the Pops, fireworks dazzled the Esplanade, and a dinosaur flew over the city. That’s right: A dinosaur. Flying over Boston. 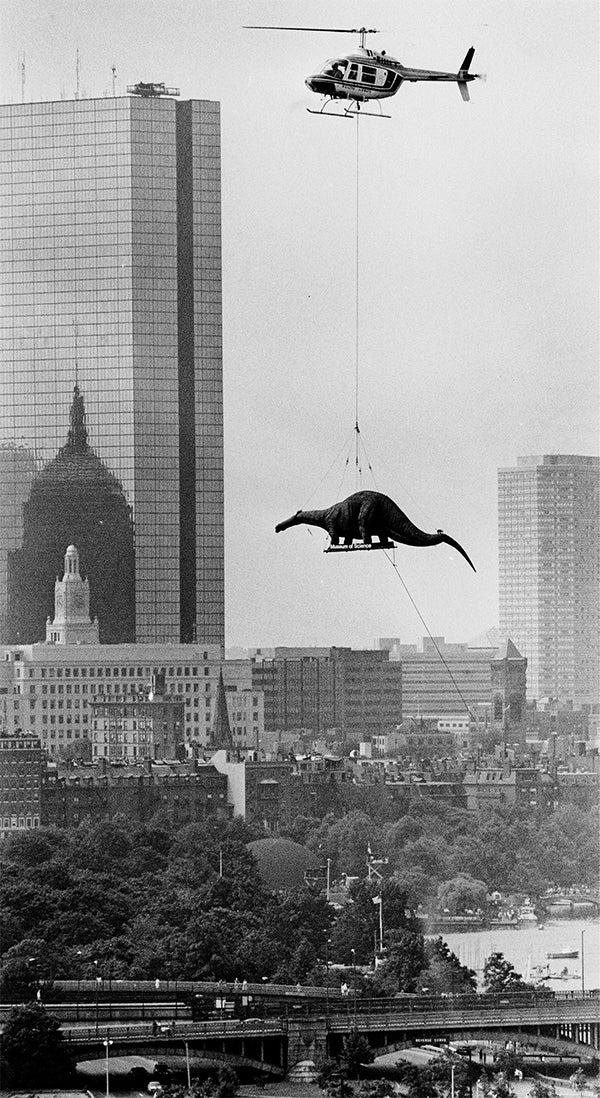 This brawny brontosaurus almost appeared real, and the only way people in the city could see it was from a distance. The dinosaur was flown in by helicopter as a publicity stunt prior to the opening of one of the Museum of Science’s many moving dinosaur exhibits throughout the ’80s and ’90s.

At the time, Arthur Pollock had been a photojournalist for more than a decade, covering anti-war protests of the late ’60s and early ’70s. By the ’80s, he was shooting photos for the Boston Herald, where he continues to work as a photo editor. On July 4, 1984, he was one of many photographers who aimed to get the perfect shot of this whimsical scene.

“This photo was one of the best photo ops Arthur witnessed in his career as a newspaper photographer,’’ says his son Jesse Pollock, who runs Unpiano Books, an independent book publisher that printed a collection of Arthur’s work in 2011. “The best shooting position was at the edge of the water with good view of the Boston skyline, so most of the media gathered there.’’

For Pollock, getting the shot was almost effortless, as the Museum of Science had the city’s media on notice in advance. 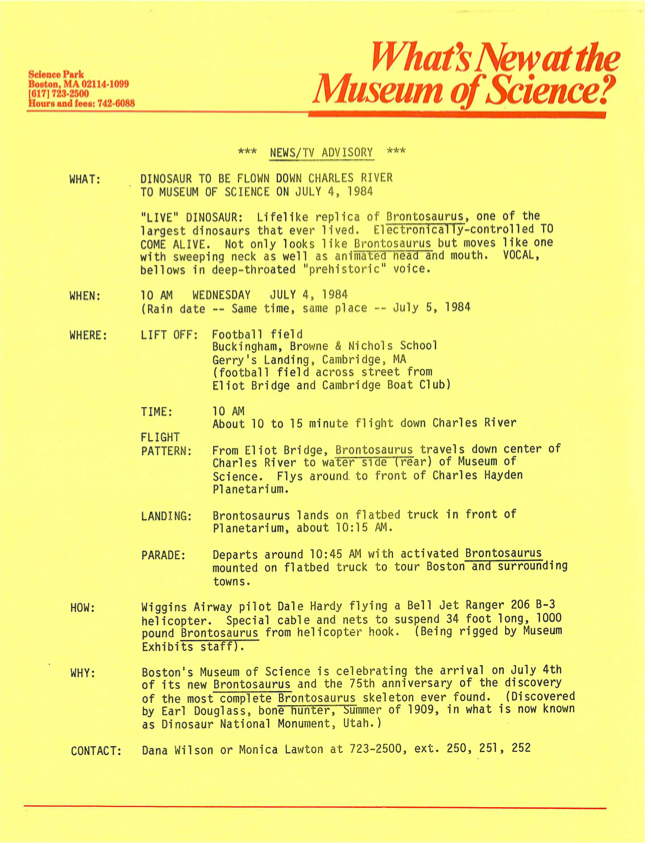 The brontosaurus, which spanned 34 feet from head to tail and weighed 1,000 pounds, departed at 10 a.m. from Eliot Bridge in Cambridge, then was lifted over the city by a helicopter. And just like that, it was time for Arthur to get his shot.

“He waited until there was good separation between the dinosaur and the buildings,’’ says Jesse. “The image was cropped vertically in keeping with the structure of the surrounding buildings. He doesn’t consider himself an ‘art’ photographer but is always on the lookout for artistic elements in a photo.’’

Hundreds came out to greet the helicopter when it touched down in front of the Charles Hayden Planetarium, where the Mugar Omni Theater now stands. The dinosaur arrived safely, but it wasn’t the easiest lift.

“It really was a difficult lift for the helicopter,’’ Dana Wilson, the Museum’s marketing director at the time, told The Boston Globe. “It weighed over 1,000 pounds with all the rigging, which is more than we counted on. After the first test flight, the pilot literally came out of the helicopter really sweating. But he still did it. I was confident, but then I’m a dreamer.’’

After all, it was Wilson who dreamed up the idea. Upon finding the dinosaur through a California company, she made sure the entire stunt was executed properly, down to the insurance in case the massive beast went falling into the Charles.

After the flight, the dino was placed on a flatbed truck and paraded with police escort through the north shore of Boston, heading over the Tobin Bridge, then to Revere Beach, up through Lynn, Nahant Beach, Salem Willows, Beverly Beaches, Manchester, and finally to several beaches in Gloucester before returning in the evening, according to Larry Ralph, Director of Education Enterprises and Temporary Exhibits. Upon its return, the dinosaur was added to the exhibit on July 6.

“This isn’t just any dinosaur,’’ reads a press release from the Museum in 1984. “But a very convincing replica, programmed to move its head, mouth and long neck like a real prehistoric creature. In addition, it bellows like a very hungry one.’’

Pollock has covered many events during his career, and while many have enjoyed this photo’s peculiar nature, it isn’t necessarily his personal favorite. It was a staged event, so in his eyes, it was low-hanging fruit. Many of his more artful images are featured in his book, which is where this dinosaur photo, among others, found new sets of eyes. Even so, he took the opportunity to lend as much imagination to the photo as possible.

“He thought the photo was a fun, eye-catching image — nothing more,’’ says Jesse. “It’s funny to see which photos have longevity. Arthur has taken a lot of photographs that are much more meaningful to him, but the Internet seems to have given this particular photo new life.’’