A business dedicated to ax-throwing and drinking beer sounds like something you’d find in a remote Midwestern town, a rural curiosity run by guys who look like Paul Bunyan. But ax-throwing venues are a growing trend, and the Boston area will soon have two of them.

One of the places arriving in the area, Urban Axes, is part of a larger chain based in Philadelphia that has plans to open in Somerville’s Union Square sometime this summer. Courtney Osgood, a representative for the company, wouldn’t confirm the space’s address, but she said that it will have a capacity of 80 to 100 people. She said the spot will be less focused on the bar aspect and more on the ax throwing, with three to four arenas, each holding four targets.

The other business, Revolution Axe, is an independent company run by four locals who intend to debut in Everett in April. According to co-founder Chris Greeno, he and fellow co-founders Dan Doran, Greg DiLullo, and Tom Vieth first became interested in an ax-throwing venture after visiting a few of them over the border in Toronto and Montreal.

“I feel like over the past year or two we’ve seen an uptake in the interest of people wanting to do more than just hang out when they go to a bar,” Greeno said. “People want to play games — you see board games at bars everywhere. People go to bars and want to play pool, play shuffleboard. I think ax-throwing can be the next big thing in that trend, where people want to go out and do something cool.”

When the four founders began looking for a location, they quickly focused on an area of Everett often referred to as the Fermentation District, a stretch of businesses that includes Night Shift Brewing, Bone Up Brewing, and Short Path Distillery. Revolution Axe plans to set up shop next door to indoor trampoline park Sky Zone and rock climbing gym MetroRock.

“Personally, I’ve been going to that area for two years now,” DiLullo said. “My girlfriend and I went to a video game event at Night Shift, and since then I’ve been there so many times. My friend who’s in a band played at Short Path Distillery. When I got involved, one of the first things I said was that area is a great spot. It’s fun, it’s up-and-coming, it’s perfect for ax throwing.”

Greeno said the city of Everett was very welcoming.

“There’s not that many options in Boston proper because it’s super pricey and really competitive,” he said. “We were impressed with how easy the city of Everett made things. They very much want to bring business to the area. They’ve been very helpful throughout the process.”

Like Urban Axes, most of the space at Revolution Axe will be devoted to ax throwing — there will be five bays, each with two targets and space at the end of each bay where friends can watch — though DiLullo said beer and wine will be served once the company lands a liquor license.

You may have become concerned when you read “ax-throwing” and “beer” in the same sentence. Both companies point out their safety precautions.

“We don’t allow anyone to come in and throw axes without getting proper training courtesy of our coaches,” Osgood said. “For the first 15 to 20 minutes, the coaches will go over safety precautions, the rules of the game, and proper throwing techniques. The attendee will then be able to throw a couple axes to get the feel. For newbies, it often takes a few throws before the axe actually sticks! The ‘axepert’ … remain[s] with the axe throwers throughout the experience. No one is ever allowed to throw axes unsupervised, no matter how many times they may have thrown before.

“Additionally, the arenas themselves are ‘walled off’ and separate from one another to ensure that the ax being thrown at the respective target will remain [in] the same vicinity. Each target is also separate from the one next to it, so there’s no chance of hitting the other person’s target.”

DiLullo said that players “will never be in harm’s way” if they do their ax throwing “correctly and safely.”

“Each group will have a coach available to introduce them to the sport, walk them through the games, and provide assistance when needed,” he said. “Also, only one player per target is allowed in [the] throwing area, and fencing between targets keeps throwers safe from axes being thrown in other lanes.”

DiLullo said that the ideal group size will probably be six to 12 people.

“It’s more of a group activity, like when you go bowling and bring a big group of friends,” DiLullo said. “One person throws it, and then their friends hang out and watch and wait for their turn. It’s very social.”

Revolution Axe isn’t just gunning for big groups of friends or bachelor parties, though. In Greeno’s eyes, even solo or couples’ throwing can be fun.

“We’ll ideally have people book ahead of time, but we want to be available for walk-ins as well,” Greeno said. “If you and your boyfriend or girlfriend walk in for a romantic night of ax throwing, we want to accommodate you.” 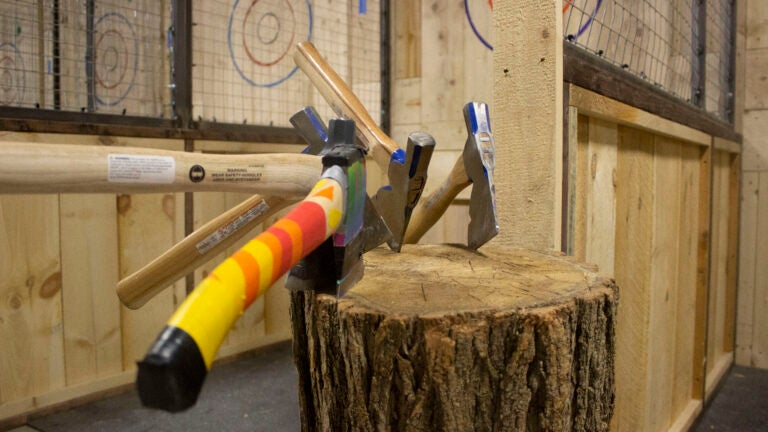 Your night just got a lot more ax-citing