On Sunday, Feb. 4, the New England Patriots and the Philadelphia Eagles have either a sixth or first Super Bowl ring on the line, respectively. But for the businesses and people below, it’s beer, doughnuts, and potentially massive embarrassment. 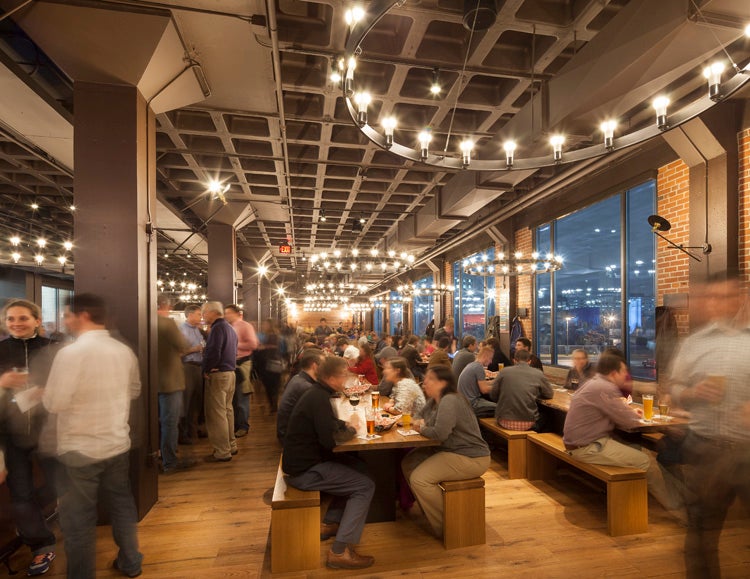 If the Patriots don’t pull off a win during Super Bowl LII, Harpoon Brewery staffers will have to spend all day Feb. 5 in Eagles gear pouring Philly Pale Ale. The Super Bowl wager between Harpoon and Yards Brewing Company in Philadelphia also means that staffers at Yards will have to pour Harpoon Fresh Tracks beer in Pats gear that same day if the Eagles lose.

And the trash talk has already begun.

“We’re going to soften the pain of their loss,” said Dan Kenary, CEO and cofounder of Harpoon. “Because they’re going to get to enjoy Harpoon IPA at their brewery the Monday after the Super Bowl.”

When asked if Kenary is prepared to don an Eagles jersey should the Pats lose, he reflected back to 2008’s Super Bowl XLII, when Harpoon placed a similar bet against Brooklyn Brewery, and the Patriots lost the game to the New York Giants.

“I’ve endured worse,” Kenary said, “having to put on a Giants jersey.”

In addition to the wager, on Wednesday the breweries each began raising money for a charity of their choice and are “competing” to see which brewery can raise the most up until the Super Bowl. Harpoon will donate $1 from the sale of every Harpoon Fresh Tracks pint and $10 from the sale of every Harpoon Fresh Tracks keg to Brigham and Women’s Hospital’s Stepping Strong Center for Trauma Innovation, founded after the 2013 Boston Marathon bombings. Yards Brewing will donate the same amount of money from sales of its pints and kegs of Philly Pale Ale to Prevention Point, which works on the front lines of the opioid crisis in Philadelphia. 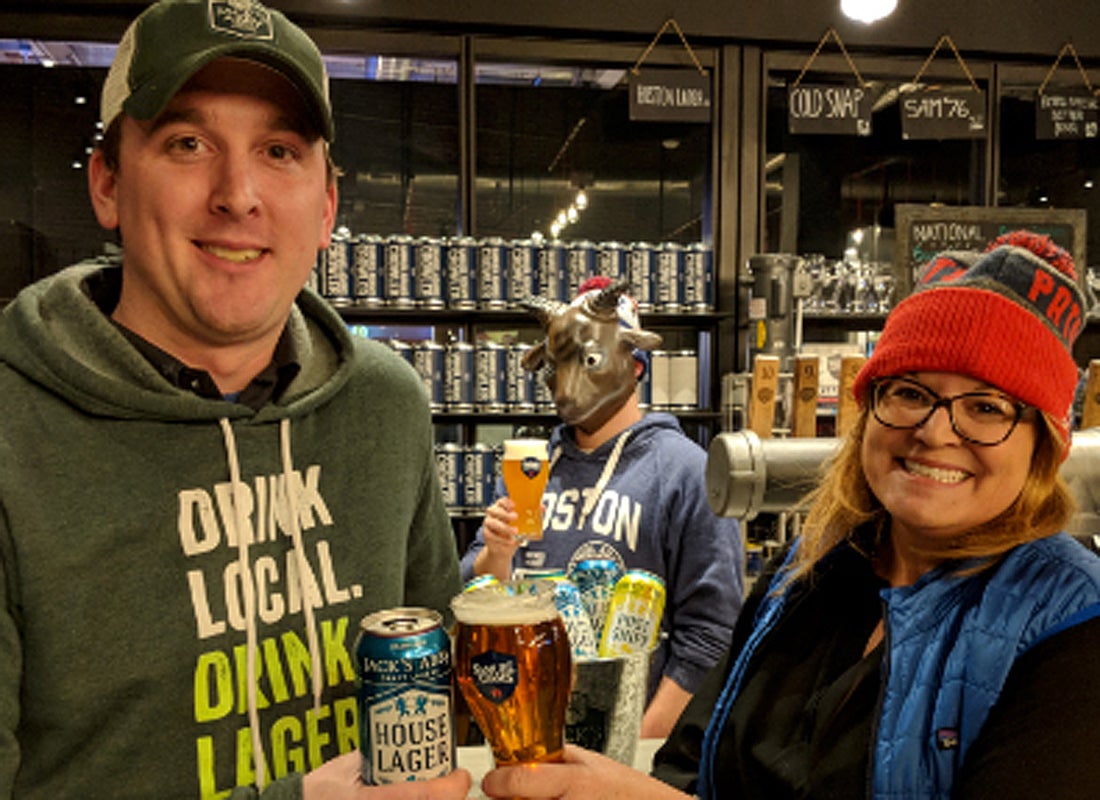 Andy Grant, business development officer at Jack’s Abby Brewing, and Jennifer Glanville, Sam Adams Brewery manager, stand inside the Sam Adams Boston Brewery Tap Room. The goat mask in the back represents part of the bet between the Boston and Philadelphia breweries.

Two other Boston-area breweries, Samuel Adams and Jack’s Abby, have partnered up and placed a bet with Victory Brewing Company in Downington, Pennsylvania, and Yuengling in Pottsville, Pennsylvania: The losing brewery has to wear the winning team’s jersey or colors as well as a mask that represents the winning team while working on Monday, Feb. 5. That means that if the Patriots win, the Philly-area breweries will wear goat masks (to represent Tom Brady as GOAT), and if the Eagles win, the Boston breweries will wear dog masks (to mark the Eagles’ status as the underdog).

And yet another beer wager: 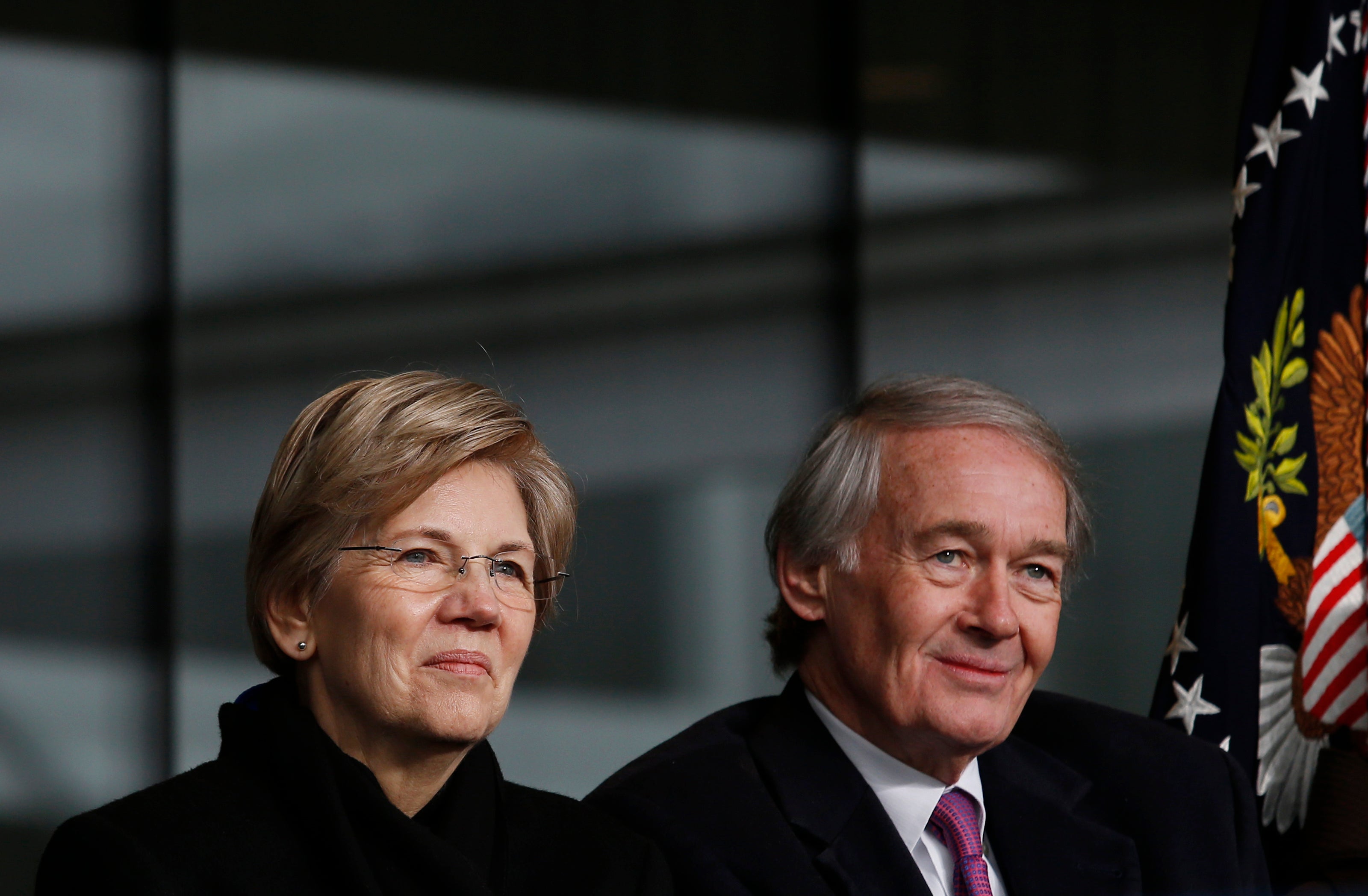 Senators Elizabeth Warren and Ed Markey at a ceremony to dedicate the Edward M. Kennedy Institute for the United States Senate in Boston in 2015.

Two Massachusetts and two Pennsylvania senators are wagering beer on the big game.

If the Eagles win the Super Bowl, Senators Warren and Markey will deliver beer from Jack’s Abby in Framingham, Notch Brewing in Salem, Flying Dreams Brewing in Worcester, and Cisco Brewers on Nantucket to Senators Casey and Toomey. Kimpton Marlowe in Cambridge has a challenge for Kimpton Monaco in Philadelphia.

The Kimpton Marlowe Hotel in Cambridge has a challenge for the Kimpton Monaco in Philadelphia: If the Patriots win the Super Bowl, the Monaco’s general manager and assistant general manager have to eat like Tom Brady for 12 days straight and document it on social media.

Joe Capalbo, director of operations for Kimpton Hotels New England and general manager of Kimpton Marlowe Hotel in Cambridge, said he plans to send both managers Brady’s book, The TB12 Method: How to Achieve a Lifetime of Sustained Peak Performance, should the Pats pull off a victory on Feb. 4. Capalbo said he’ll pay for his colleagues to receive Brady’s TB12 Performance Meals, or they can do their own cooking by following Brady’s book. But whatever method they pick, they must document it.

“I need proof,” Capalbo said. “I need something on the hotel’s social media — Instagram, Facebook — just something that shows they are embracing this and enjoying eating their kale and lentils for the 12 days, hopefully with a smile on their face.”

If the Eagles win, Capalbo has to channel his inner Rocky by running along the Charles at 5 a.m. every day for 12 days straight in a Rocky-like robe that says “Balboa.” The Oscar-winning film “Rocky,” in which Sylvester Stallone plays the title character, is set in Philadelphia, and Stallone, who is a huge Eagles fan, went to high school in Philly. (Incidentally, the actor has been banned from the Esplanade until after the Super Bowl.)

“I don’t think I’ll be running at 5 a.m. after this game,” Capalbo said. “I think they’ll be the ones eating.”

Having some good natured fun (and bragging) with Philadelphia Mayor Jim Kenney while being interviewed by Washington, DC NBC affiliate on our “Rocky” v. “Rocky” #SuperBowlLII wager. Props to Keith Hayes for the idea! TAG: New England Patriots The Hall at Patriot Place presented by Raytheon The Enterprise of Brockton

Speaking of Stallone: The mayors of Brockton and Philadelphia have also placed a friendly wager, this one dubbed the “Rocky vs. Rocky bet,” involving famous boxer statues in their respective cities.

If the Patriots come out victorious in the Super Bowl, the iconic Rocky Balboa statue in Philadelphia will be dressed in Patriots gear, said Philadelphia Mayor Jim Kenney. If the Patriots lose, the statue of the undefeated Rocky Marciano outside of Brockton High School will be dressed in Eagles gear, said Brockton Mayor Bill Carpenter. The mayors discussed the bet in a video posted on Carpenter’s Facebook page on Thursday.

“I don’t know how long it will stay on,” Kenney said of Patriots gear on the Balboa statue in the event of an Eagles loss.

“It’s going to have to be a quick photo, I think, in either city,” Carpenter said with a laugh.

“We’re going to have to Crisco the Rocky statue so someone doesn’t climb up and take it off,” Kenney added.

Now Kane’s has set its sights on Dottie’s Donuts in Philadelphia, a shop that hasn’t been exactly quiet about its support for its home team. On Monday, Dottie’s announced a ban on all Boston cream doughnuts and “New England-themed” doughnuts “until the Eagles win the Super Bowl.”

We want to issue a wager to Dottie’s Donuts if the Patriots lose the Super Bowl we will send you a dozen Kane’s Boston Cream Donuts. When the Eagles LOSE you are send a dozen of your delicious donuts! #gopats #kanesdonutsarelove

“We know that we’re going to enjoy a dozen of your doughnuts,” said Paul Delios, co-owner and president of Kane’s, in a video directed toward Dottie’s and posted to social media on Wednesday. 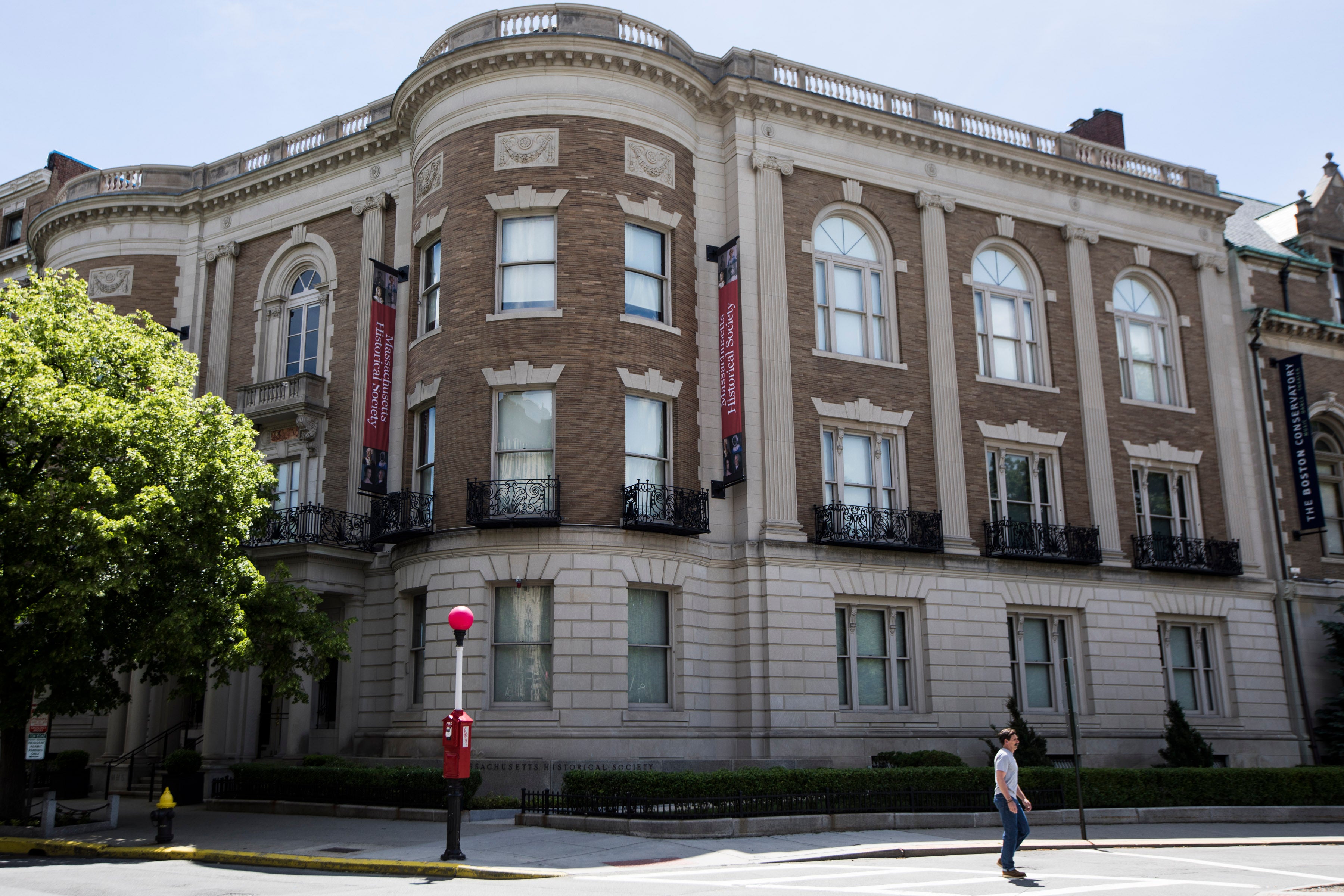 Passersby walk near the Massachusetts Historical Society in the Fenway neighborhood in Boston on June 4, 2017.

History might be at stake here: The Massachusetts Historical Society in Boston and the Museum of the American Revolution in Philadelphia have placed a friendly Super Bowl wager involving “Cradle of Liberty” bragging rights. 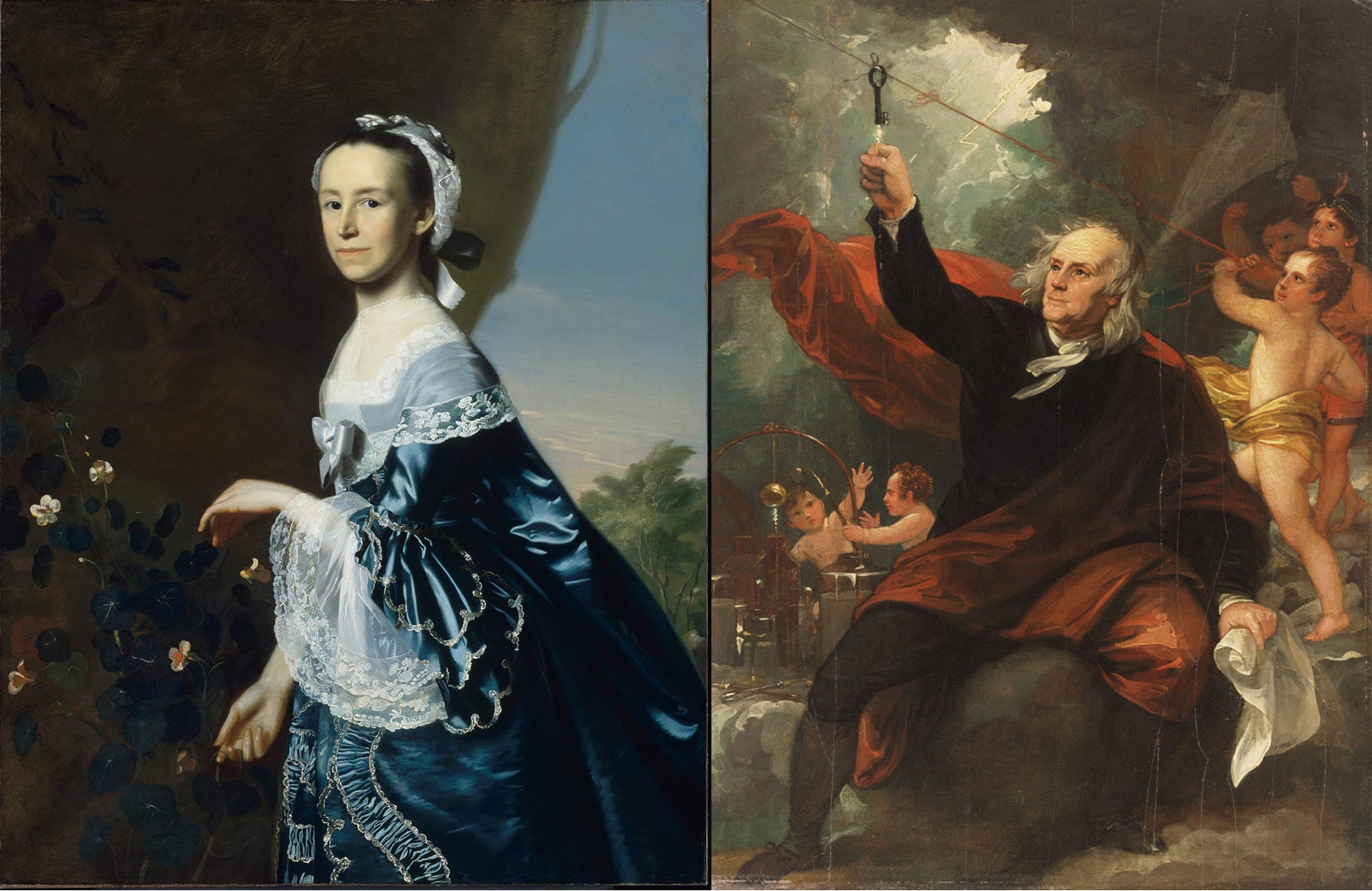 ‘Mrs. James Warren (Mercy Otis),’ (about 1763) by John Singleton Copley (left) will head to Philly if the Patriots lose. ‘Benjamin Franklin Drawing Electricity from the Sky,’ (1816) by Benjamin West (right) will be sent to Boston if the Patriots win.

The Museum of Fine Arts has placed an art wager with the Philadelphia Museum of Art. If the Patriots win the Super Bowl, the Philly museum must loan “Benjamin Franklin Drawing Electricity from the Sky” (1816) by Benjamin West to the MFA. If the Eagles win, the MFA will loan “Mrs. James Warren (Mercy Otis)” (about 1763) by John Singleton Copley to the Philly museum. The amount of time the winning museum will keep the iconic piece of art from the losing Super Bowl city has yet to be agreed upon. 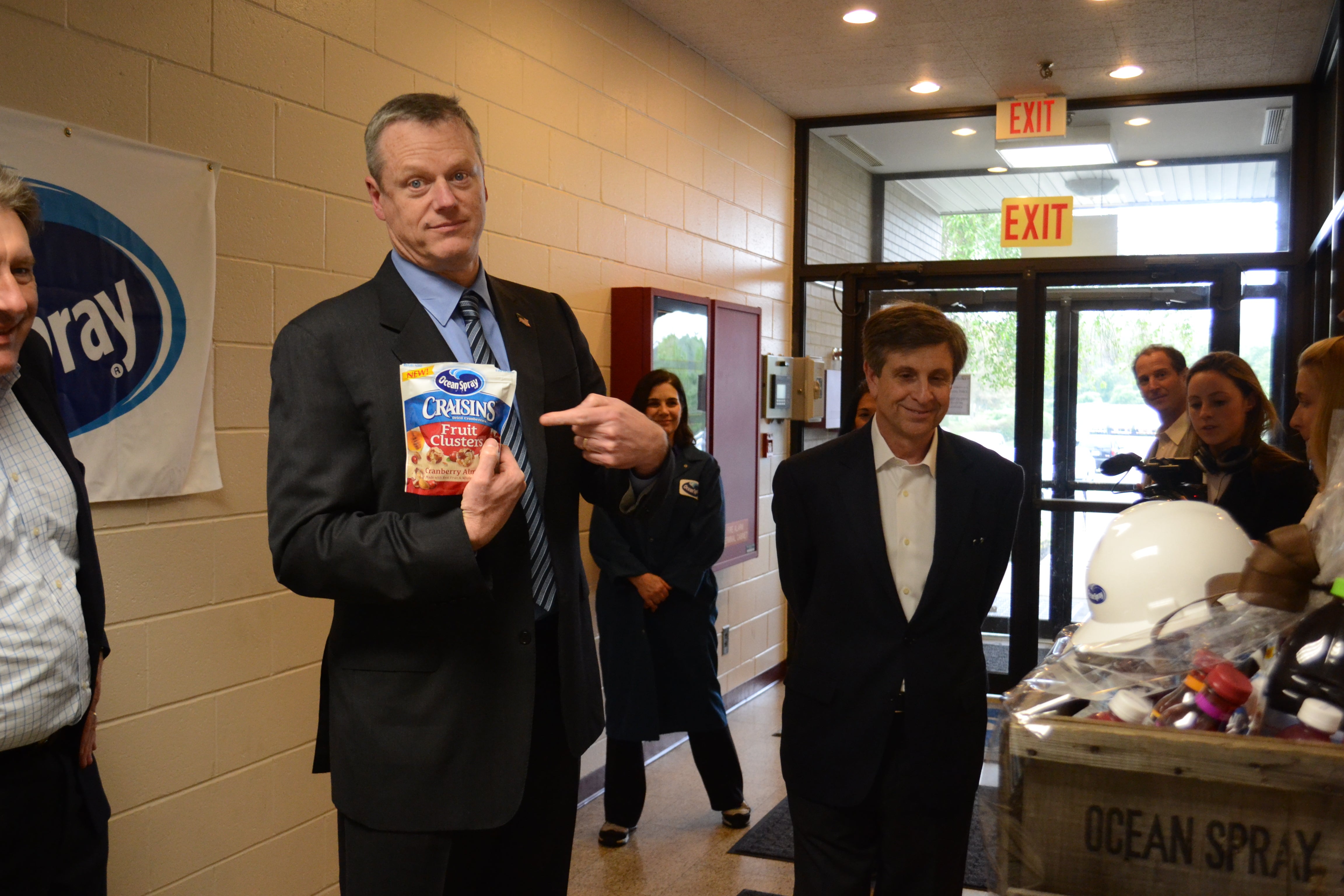 Charlie Baker during a 2015 visit to the Ocean Spray Cranberry manufacturing facility in Middleborough.

Contrary to what the Massachusetts and Pennsylvania governors did the last time the Pats and Eagles played in the Super Bowl, Gov. Charlie Baker and Pennsylvania Gov. Tom Wolf have placed massive food wagers on Sunday’s game. The governors have agreed that the winner will donate the bounty to a local food pantry of his choice.

Wolf is betting the following Pennsylvanian foods: soup from Rooster Soup Co.; scrapple from the Reading Terminal Market; coffee from La Colombe; doughnuts from Federal Doughnuts; and donated pizza slices at Rosa’s Fresh Pizza (which provides hundreds of meals per week to the homeless in Philadelphia).

For Patriots fans, it’s all about the GOATS! Are you up for a friendly little wager, Philadelphia Zoo? Everyone in New England knows that Tom Brady is the GOAT – Greatest of All Time – and if we win the game on Sunday, we want to make it interesting. A New England Patriots win means that you’ll name your next born goat “Brady”! If we lose, Zoo New England’s next born goat will be named “Foles”, after your quarterback. What do you say?

Zoo New England, which operates Franklin Park Zoo in Boston and Stone Zoo in Stoneham, has placed a Super Bowl wager with the Philadelphia Zoo involving — what else? — a goat.

“In New England and beyond, it’s a known fact that Tom Brady is the GOAT,” said John Linehan, Zoo New England president and CEO, in a statement. “This challenge with the Philadelphia Zoo is the perfect way to have some fun and friendly competition heading into the big game on Sunday.”

Why Mayor Walsh is not placing a wager: 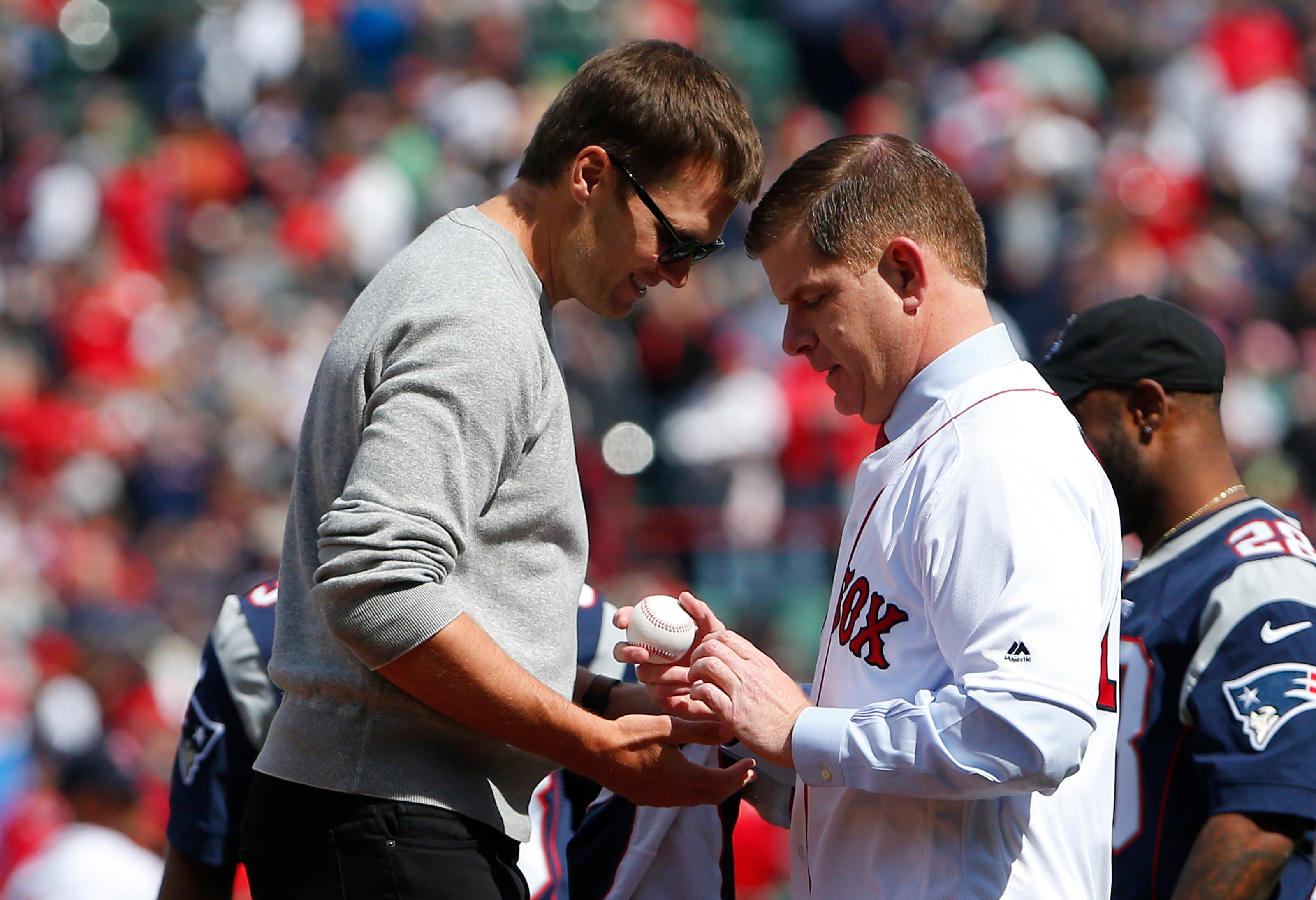 Tom Brady is handed the ball for the ceremonial first pitch by Boston Mayor Marty Walsh before the start of Red Sox’ Opening Day game last year at Fenway Park.

So where is Mayor Walsh’s Super Bowl bet? He hasn’t made one. After losing various bets involving Boston sports teams in previous years, he won’t bet anymore, according to his office.