Waltham-based Saucony has teamed up with Canton-based Dunkin’ to serve up a second running shoe in time for the 2019 Boston Marathon.

The Saucony x Dunkin’ Kinvara 10 is the latest marathon-inspired collaboration between the two brands. Last year, the Kinvara 9 — complete with a strawberry-frosted doughnut on the heel and “America Runs on Dunkin'” printed on the heel’s reflective stripe — sold out in record time, Saucony said in a statement.

This year’s limited-edition shoe features Dunkin’s famous orange and pink colors once again, this time in a graphic motivated by Dunkin’s new product packaging. It has a strawberry-frosted doughnut medallion on the laces, a Dunkin’ coffee cup on the tongue, and the word “Boston” on a reflective strip. Each pair comes packaged in a custom shoebox that resembles a Dunkin’ doughnut box.

“Marathons bring out the best of the human spirit, and the collective good that surrounds our hometown race is remarkable, inspirational and contagious,” said Don Lane, chief marketing officer of Saucony, in a statement. “We’re proud to partner with fellow Boston brand-icon Dunkin’ in the creation of the Saucony X Dunkin’ Kinvara 10, delivering even more goodness to our running community.”

The Saucony x Dunkin’ Kinvara 10 and its doughnut box shoebox.

The shoe, which costs $120 for adults and $65 for kids, is available starting Thursday at saucony.com and at the Marathon Sports in Boston, and starting Friday at the Marathon Sports in Brookline, Cambridge, and Wellesley and on marathonsports.com. The shoe also will be available at the John Hancock Sports & Fitness Expo at the John B. Hynes Veterans Memorial Convention Center in Boston from April 12-14. 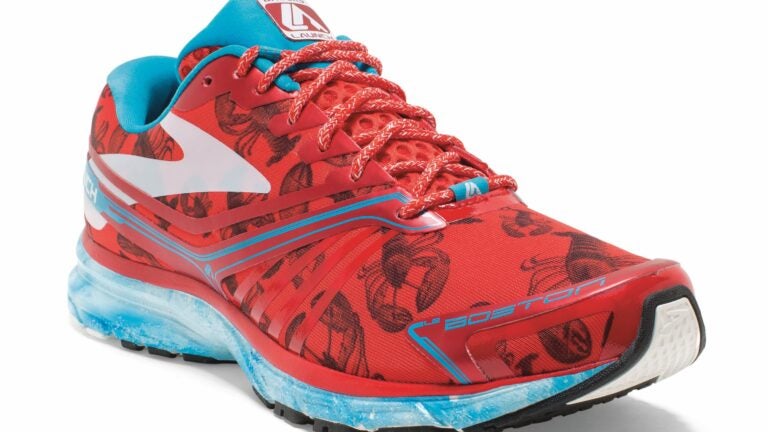 Feeling cooped up? A local running expert helped us put together an online sneaker shopping guide