A Boston couple and Ken Burns are on a mission: to find the next Ken Burns.

Philanthropists Jeannie and Jonathan Lavine have donated $15 million to create The Library of Congress Lavine/Ken Burns Prize for Film, a national award recognizing exemplary accomplishment in historical documentaries. The $200,000 award, a finishing grant to help up-and-coming filmmakers complete final production, will be disbursed annually for the next 10 years.

Part of that $15 million will also help fund four of Burns’s upcoming films: “The American Revolution,’’ “America and the Holocaust,’’ “LBJ & the Great Society,’’ and “Benjamin Franklin.’’ The filmmaker has won 16 Emmys and has twice been nominated for an Oscar.

“I’d like to see there be not another Ken Burns but maybe 10 other Ken Burnses,’’ said Jonathan Lavine, co-managing partner of Bain Capital. “Telling our stories in an unbiased, fact-based, long-formed way is so critically important to civic education in our country.

“Jeannie and I have had a belief that it’s really important to have good-quality documentaries in the world. To find, support, and help create the next Ken Burns is an important mission.’’

The Lavines, who met as students at Harvard Business School, helped fund 2017’s “The Vietnam War,’’ a 10-part documentary series directed by Burns and Lynn Novick. In 2018, the couple donated $5 million toward CitySpace, the recently opened WBUR events space on Commonwealth Avenue. Jeannie also serves on several boards, including The Better Angels Society, a nonprofit “dedicated to educating Americans about their history through documentary film.’’

“What they did here was completely blow me away. I don’t know how else to describe it,’’ Burns said from his Walpole, N.H. home. “Their contribution to each [upcoming film] will be so significant, it permits me to have a more intimate relationship with the material, and not be just on the road raising money.

The $200,000 finishing award could make all the difference to an up-and-coming filmmaker, said Burns, a 1975 grad of Hampshire College in Amherst.

“To give a prize of $200,000 might be the difference of finishing a film, and putting it up on the shelf and getting a real job, and that was my dilemma when I was starting out,’’ said Burns, alluding to his 1981 Academy Award-nominated debut “Brooklyn Bridge.’’

The submission deadline for the inaugural award was June 1, and the winner will be feted at a gala at the Library of Congress in October. The award aims to recognize a filmmaker whose documentary uses original research and compelling narrative to tell stories that touch on some aspect of American history. A team of people, including Burns, will evaluate the films.

The films must not be politically-motivated; the award will go to filmmakers “who are interested in telling American stories without a political bent,’’ said Burns. “You don’t want to piss off half the country.’’

Why create this award now?

“As people consume more information through video than ever before, having high-quality, fact-based unbiased documentaries that convey important lessons is critically important for educating our democracy,’’ Lavine said.

“We were a leading funder of ‘Vietnam,’ and that’s a classic example of the power of [Burns’s] storytelling,’’ Lavine said. “For all the things we’ve seen on Vietnam, it never occurred to me until I watched that I’d never seen someone interview the Vietnamese soldiers. Just think about that perspective on any issue in history.’’

Burns called the Boston couple “enlightened underwriters’’ who prove that “philanthropy need not be a transactional thing. It doesn’t always have to be bricks and mortar — it can be about ideas.’’ 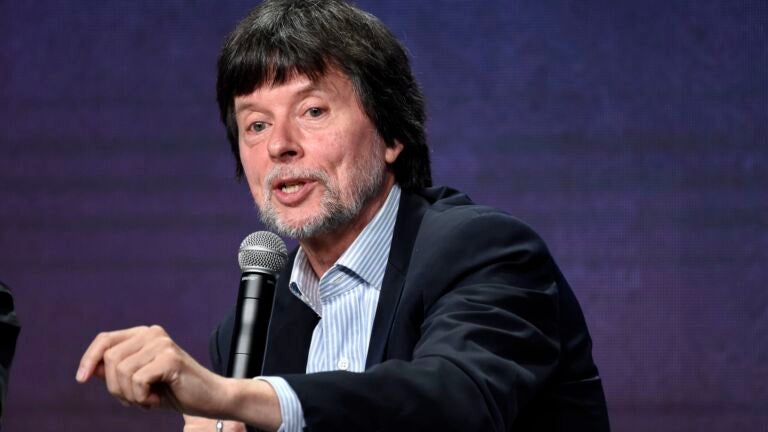