NEW YORK — “Uncut Gems’’ was the city’s hottest ticket Thursday night, as countless celebrities congregated at New York’s Alice Tully Hall to catch the new feature from “Good Time’’ directors Josh and Benny Safdie, then headed down to East Houston for a wild afterparty at the legendary Katz’s Delicatessen.

Introducing their frenetic crime-thriller, which stars Adam Sandler as a slippery New York jeweler closing in on a million-dollar payday, the BU-bred brothers thanked cast and crew members (dozens of whom were in attendance) before referencing two “famous Jews,’’ physicist Richard Feynman and comedian Rodney Dangerfield.

“The world is a dynamic mess of jiggling things, if you look at it right,’’ said Josh, quoting the former, with Benny adding from the latter, “I get no respect. This last week, my tie was on fire. Some guy tried to put it out with an ax!’’

The two quotes were apt accompaniment for “Uncut Gems,’’ an alternately comical and anxiety-inducing film involving Ethiopian diamonds and Jewish gangsters. It was met ecstatically by the filled-up theater, with cheers, laughs, and even a spontaneous applause midfilm. Sandler, who’s electric on screen in a rare dramatic turn, took the stage after for a Q&A along with the Safdies, breakout costar Julia Fox, and NBA hoopster-turned-actor Kevin Garnett (essentially the second lead in the film, whose nail-biting finale hinges on the outcome of a Celtics game).

Calling the Safdies “fresh, original, and riveting,’’ Sandler saluted the brothers’ famously relentless, gutter-cinema style. “To come out with a new voice,’’ he said, “they just knocked me out.’’

Garnett, making his feature film debut, said he felt like he was “part of something special’’ working on “Gems,’’ which the Safdies spent 10 years developing. “If I do another one of their films, I want to be a villain,’’ he added, cracking that he’d also like to be killed off quickly.

At Katz’s, where Biz Markie manned the turntables and festivities raged from midnight until around 3 in the morning, it was near-impossible to move through the kosher-style deli without encountering a famous face, including most of the “Gems’’ crew.

Though Garnett didn’t make it out and The Weeknd (who appears as himself) reportedly fell ill before the event, Eric Bogosian, Judd Hirsch, musician-actor Trinidad James, and cinematographer Darius Khondji were spotted along with Sandler, Fox, and the Safdies. 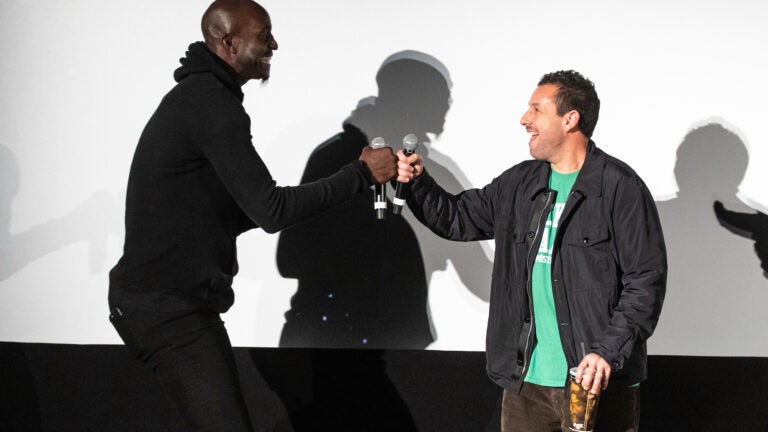