Is it safe to run outside during the coronavirus pandemic? The answer is complicated.

Experts have consistently said that at least 30 minutes of moderate exercise a day is important for overall health and helps boost the immune system. In normal times, jogging is a perfect way to do this, with little to no equipment needed.

But these are not normal times, and questions persist about whether running outdoors is safe.

In Somerville, the most densely populated city in New England, social distancing while exercising can be difficult. On mild afternoons, you’ll consistently find people running on sidewalks, in bike lanes, and in the middle of the street simultaneously. Some wear masks or face coverings and do their best to stay six feet from other pedestrians, while some do neither. The story is similar in Boston and Cambridge, with running paths along the Charles River consistently full, especially during peak hours amid nicer weather.

For those considering running outside, here’s what you should know about how to stay safe — and keep others safe — during the coronavirus pandemic.

(Note: This article was published on April 16, 2020. Due to the rapidly changing nature of the coronavirus public health crisis, some of the recommendations included in this article may eventually become out-of-date. Be sure to consult Boston.com’s latest coronavirus coverage for the most up-to-date information.)

A man relaxes in a hammock on the Esplanade as mask-wearing people run and cycle by him on April 6.

What are the rules in Massachusetts?

Gov. Charlie Baker issued an advisory that Massachusetts residents should wear a face covering when social distancing is not possible. If an exercise area is crowded, runners are no exception.

Beyond that, the state’s cities and towns have enacted a few different measures.

Boston has kept its parks open for walking, running, and cycling, while cordoning off playground structures, fitness equipment, athletic fields, and recreation courts. However, the city’s website states that use of parks is only allowed if you are able to maintain social distancing of at least six feet.

“If you find a park to be crowded, choose a less busy time or find another park,” the website reads.

Going at a less busy time is a good suggestion, but unfortunately the city is also calling for everyone except for essential workers to stay home from 9 p.m. until 6 a.m., which narrows the possibilities.

Somerville and Cambridge have enacted similar recommendations, with Somerville telling residents to “come back at another time” if a park is too crowded to maintain social distance and suggesting people exercise in neighborhoods instead of parks.

Be sure to check your local municipality’s guidelines before heading out.

Do I need to wear a mask or face covering while running outside?

That said, experts believe the virus is more likely to be transmitted indoors than outdoors.

“Usually there’s a lot more social distancing outside,” Dr. Kevin Winthrop, a professor of Infectious Diseases in Epidemiology and Public Health at Oregon Health & Science University in Portland, told NPR. “And environmental factors like wind and UV [radiation, which degrades most viruses] make it less likely you’re going to come in contact with viral particles.”

Dr. Ashish Jha, director of the Harvard Global Health Institute at the Harvard T.H. Chan School of Public Health, told the Boston Globe that everyone should wear masks outdoors, but evidence that runners could be a meaningful source of transmission is “pretty weak” and that ensuring every runner wears a face covering shouldn’t be “a major priority.”

It should be noted that “face covering” does not mean wearing an N95 mask, which should be preserved for healthcare workers. Instead, use coverings like scarves, bandanas, or dust covers that fit the following criteria:

— Fit snugly but comfortably against the side of the face;

— Can be secured with ties or ear loops;

— Include multiple layers of fabric;

— Allow for breathing without restriction;

— Are able to be laundered and machine-dried without damage or change to shape.

Runners, walkers, and cyclists in the Esplanade on April 6.

What should I do if I can’t breathe while running with a mask or face covering?

Aside from the most hardcore runners who still hit the trails in subzero temperatures, running with a face covering will be a new experience for many. If your mask fully covers your mouth and nose as it should, your breathing will inevitably create moisture.

“Exercising in a face mask will create a warm and humid microclimate around your face” Dr. Grant Lipman, a clinical professor of emergency medicine at Stanford University, told the New York Times, adding that the mask will turn the bottom half of your face into a “mini-sauna.”

The Boston Public Health Commission says you can temporarily remove your mask to catch your breath, but only when no one is nearby.

“When exercising, if people need to remove a face covering to breathe adequately, make sure no one is around before removing it,” the organization advised. “Keep the face covering readily available so it can be placed back on should a person come within six feet of others.”

Is six feet of social distancing sufficient while running outside?

As of now, the scientific consensus recommends that people maintain at least six feet of social distancing. Note that the recommendation is “at least,” not “only.”

A recent study found that sneezes or coughs can potentially send airborne droplets a greater distance than six feet, and some experts have diverged from the six-foot rule of thumb.

“The mnemonic I like to use is double your distance,” Dr. Ben Levine, a professor of Medicine and Cardiology at the University of Texas Southwestern Medical Center in Dallas, told NPR.

While Levine didn’t have data to support his 12-foot recommendation, he told NPR that “the greater volume and rate of breathing that occurs during exercise has the risk of spreading droplets farther.”

The six-foot rule is intended to reduce transmission of the disease. If you’re able to maintain more space, all the better.

“Everything is about probability,” Dr. Harvey Fineberg, the head of the Standing Committee on Emerging Infectious Diseases and 21st Century Health Threats at the National Academies of Sciences, Engineering and Medicine, told the New York Times. “Three feet is better than nothing. Six feet is better than three feet. At that point, the larger drops have pretty much fallen down. Maybe if you’re out of spitting range, that could be even safer, but six feet is a pretty good number.”

Runners and walkers on April 6. Some wearing masks, some not.

What are some other things to remember if I choose to run outside?

Beyond maintaining social distance and wearing a face covering, here are a few other things to keep in mind:

— Run solo if possible. Running and cycling can be great social activities, but with so many others filling the sidewalks, it’s easier for everyone to maintain social distance if you exercise alone.

— Take it easy if necessary. Running with a mask or face covering can be difficult, and cause people to feel winded more quickly than normal. Rather than running full-tilt and then needing to remove a mask to breathe, try slowing down.

— Don’t touch surfaces that may be contaminated. Benches, banisters, and “walk” buttons at intersections are some examples of surfaces you wouldn’t normally think twice about touching while on a run. But for now, avoid them. 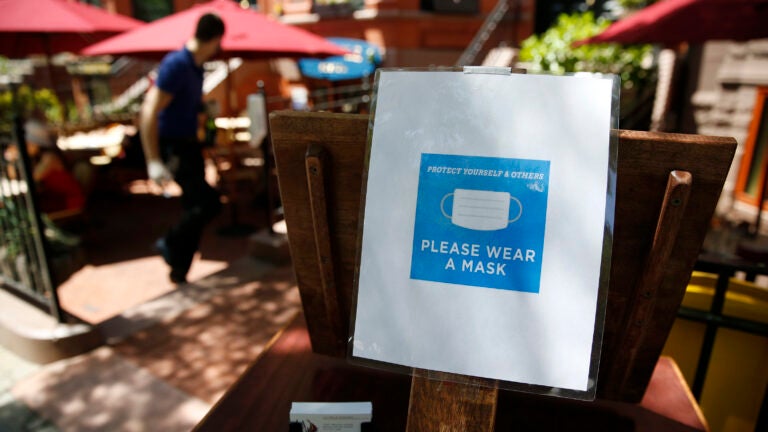 What an infectious disease doctor thinks of Mass. accelerating its reopening timeline