This weekend, Ginny Bevington will secretly deliver wine to several strangers in her Massachusetts town.

It’s a practice that has gained traction during the coronavirus pandemic over the past two weeks in at least three communities north of Boston. The “Billerica, Tewksbury, and Wilmington Wine Fairies” private Facebook group, which Bevington launched April 30, has ballooned from 40 to more than 3,400 members.

“It’s crazy,” said Bevington, a Tewksbury mother of three who works part-time as a property manager.

Bevington got the idea from her cousin in Maryland who shared information about a similar group.

“I said, ‘That sounds absolutely amazing,'” Bevington said. “I know tons of ladies who would love to receive a bottle of wine and just know someone is actually thinking about them, especially as we’re not able to spend time together physically.”

Here’s how it works: Members must be 21 years old, live in Billerica, Tewksbury, or Wilmington, and agree to the page’s rules. Once a member, they post their address and wine preferences. After that, another member acts as “wine fairy” and delivers a bottle to their doorstep. All members are expected to take a turn as a fairy. As Bevington wrote on the rules page: “This group is not about receiving free wine. If you’re here only to be gifted, you aren’t getting the point.”

Bevington initially invited 40 local friends to the group. Then the friends invited more friends, and so on. As the group grew, she realized that members were happily gifting strangers as well as friends.

“The fact that they are going out there and just really putting themselves out there for other people, that just makes me so happy,” Bevington said. “That’s exactly what the group was meant for: to spread happiness and joy.” 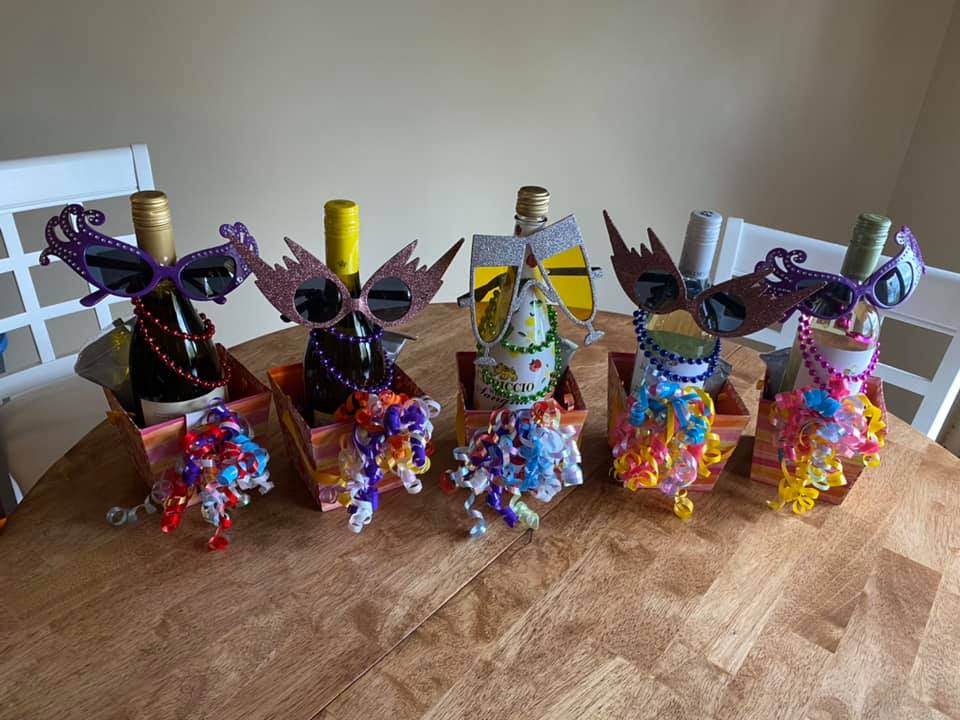 The “fairies” often post photos of their deliveries. Some dress up the bottles with tissue paper, ribbon, poems, and even include little gifts such as face masks or candy, Bevington said.

One of the page’s moderators, Brianna Greenwood, of Tewksbury, makes dozens of deliveries at a time, buying the wine with money raised from creating and selling wine glasses, shirts, and stickers.

The recipients “getting wined” range from nurses to teachers to moms working from home while caring for their kids, Bevington said. Many post heartfelt thank-yous. Some share stories about how the uplifting group has helped them cope with the pandemic, the death of loved ones, illnesses, and more.

Some post that giving to others is the true gift.

“One woman recently posted that she has been making deliveries with her 17-year-old adopted daughter,” Bevington said. “And that it has brought her and her adopted daughter together.”

A man known as “Big Daddy Fairy” has become a popular fixture on the site.

“I believe he said at one point that he works 12-hour shifts and then he’s coming home and delivering three to four bottles to people who haven’t received any wine yet,” Bevington said. “He’s dressing up as a fairy. His daughter loves it.”

Then there are the “unicorn fairies” who make their deliveries to music while dancing and wearing unicorn heads — and share it all in video posts, she said.

“There’s a lot of people who are feeling really lonely right now,” Bevington said. “To receive something — even from a stranger — is saying, ‘Hey, I’m thinking about you even though I don’t know you. It’s making people feel closer to each other.”