When a pandemic stops you from seeing the world, you may as well become a tourist in your own backyard.

That’s the mantra adopted by Sophie Crafts, an educator in the Cambridge Public Schools system, who is nearly done with a unique “pandemic project”: Walking every single street of the People’s Republic.

“When we went into lockdown last spring, I started going for daily walks — like a lot of people — as a chance to get out of the house, get some fresh air, and some exercise,” Crafts said. “But I realized I didn’t actually know my neighborhood that well.”

Crafts, who hails from Western Massachusetts and hopped around the world after graduating from Clark University in 2010, settled near Inman Square about five years ago. She quickly outgrew her daily laps around Donnelly Field at the start of the pandemic and started tracking her walks to make sure she was exploring more unfamiliar corridors of her neighborhood.

Crafts soon decided to explore her entire ZIP code — 02141, covering much of East Cambridge — and by May, the strolls evolved into a mission to walk the whole city.

She set some ground rules: No listening to music or podcasts to ensure total immersion. Try to stick to walking in the daytime, but cut yourself some slack once late fall hits and everything is pitch black before 5 p.m. Friends can come along but only if they don’t distract too much from the scenery. Highway roads without sidewalks and streets under construction don’t count, and it’s okay to bike or drive to farther areas when starting a new walk.

She began the project with Instagram updates cataloging her excursions and the decorative minutiae that caught her eye — vintage wall-mounted mailboxes, ceramic street signs embedded into brick walls, homes painted in vibrant blues and greens and yellows and pinks. There’s turkeys perched on a fence, flamingos made of scrap metal, stone ram sculptures flanking a small set of stairs, a secret garden she describes as “driftwood chic,” a gorgeous wooden swing fit for a fairytale, and plenty of pets peering out of windows.

One unusually tropical discovery: She estimates she’s spotted around half a dozen homes adorned with pineapples throughout the city. She learned that the fruit is a historic symbol of welcome and hospitality… though urban legend dictates that it could also have more salacious implications.

And because Crafts has been chipping away at walking Cambridge since last spring, there’s a striking sense of chronology as the scenery evolves from tulips and roses to foliage and pumpkins to snow and icicles. She noted that different elements of the urban landscape stand out depending on the season: Gardens pop in summer while stained glass windows and holiday lights dazzle the darker winter months. 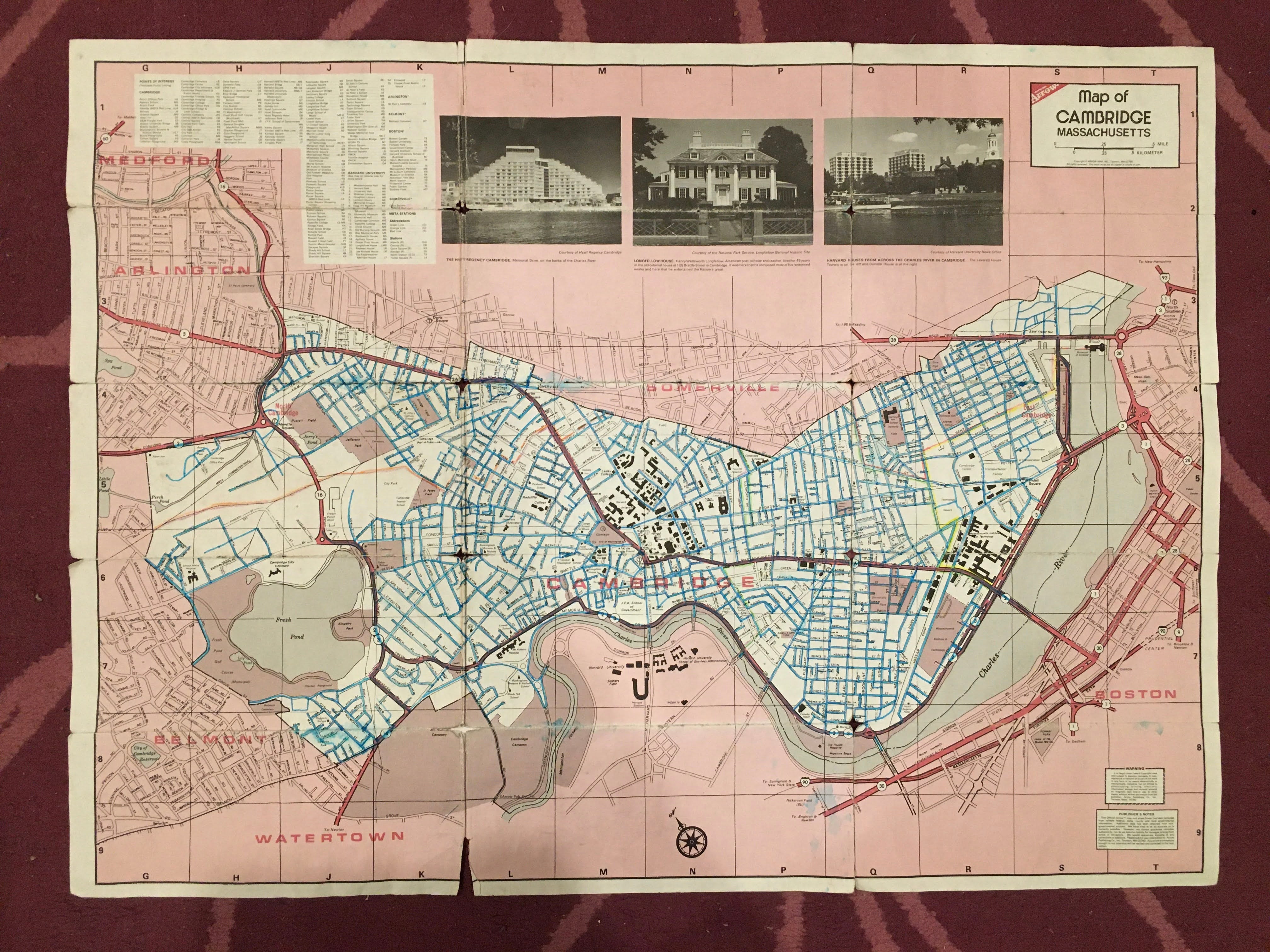 Along the way, Crafts has meticulously tracked her progress with an extensive color-coded spreadsheet and a paper map colored in blue, the highlighted streets slowly creeping across the city like frost forming on a window.

“I really like the satisfaction of completing something,” Crafts said. “Every walk was nice as a walk, but the most satisfying part was coming home, coloring a map, and checking off a spreadsheet.”

Crafts initially used Google Maps to track the streets she’s walked, but she soon realized it wasn’t the ideal tool. It’s great for navigating, but it’s not fantastic at actually marking up maps, and small phone screens can’t show the details of the whole city at once. She needed an image where she could easily see everywhere she’s been in real-time, and she figured out that a digital app can’t beat a physical map.

“Which looks super dorky, but that’s okay,” she said, noting that she sometimes carried the map in a fanny pack. “There were times when people asked if I was lost.”

It’s not so straightforward to find an appropriate paper map in the era of GPS, but she procured the perfect specimen from some friends in Watertown: a folded city map printed by Arrow, the company behind those yellow road atlases found in the backseat of nearly every New England car in the ‘90s and early 2000s.

But the map is quite outdated, so Crafts would regularly stumble upon newer streets that were missing on the map or spot ghost roads that no longer existed. (She said she didn’t know exactly how old the map is, but a hit from the Library of Congress seems to indicate that it was printed in 1993.) And the various digital maps — Google, Apple, Waze, Fitbit, even Geocaching — never completely agreed with each other or the list of streets she got from the Cambridge tourism board.

“At first it was like, ‘How am I going to know if I’ve done this accurately and completely?” she said. “But then I realized, this is actually awesome, it’s an opportunity to see how Cambridge has changed.”

After each walk, Crafts uses Fitbit data and her memory to make sure she filled in the right spots. It wasn’t a big deal that the map is outdated, as she could just draw extra lines or cross out demolished dead ends. And she’s extremely thorough, making sure to fully walk to city boundaries, even hitting the exact halfway points of the nine bridges that straddle the Charles River between Cambridge and Boston. She plans to drive around the city and hit all the little one-block gaps she’s missed for her penultimate walk.

The project is now tracked on a blog called “Sophie Strollin’ Streetblocks,” an homage to Crafts’ past life as a street accordionist under the moniker “Sophie’s Smokin’ Squeezebox.” (If you commuted via the Red or Green Lines or visited the Public Garden between 2016 and 2018, there’s a good chance you’ve stumbled upon the School of Honk musician playing some covers of iconic tunes with her dancing marionette.) The mission slowed once school started in the fall, but it picked up again in the winter — she attributes her comfort in the cold to her street performing days, when she’d play outside in an elf costume during the holiday season.

Closing in on 100 total walks, Crafts only has a few left in places like Agassiz and Neighborhood Nine to complete the city. She plans to wrap up the project this month with fanfare: She said she’s convinced Mayor Sumbul Siddiqui and other members of the Cambridge City Council to join her on a final walk near City Hall. She envisions wrapping up with a “grand finale,” inviting the council members and the friends who accompanied her on her strolls to feast on a cake decorated with a map of the city. Many of her friends are musicians, so there may even be a parading brass band.

Crafts hopes to get the mayor to sign the completed map, which she plans on promptly framing. At this point, that map shows signs of its heavy usage. Its folds and creases and corners are fraying. It’s barely held together with Scotch tape, and it no longer lies flat. Stains from spilled water bottles smudge some of the blue-inked streets. But Crafts finds the wear and tear appealing, as it materially shows the effort behind the project — and it serves as an apt visual metaphor for getting through a very tough year.

“This is my trophy for getting through [the pandemic],” she said. 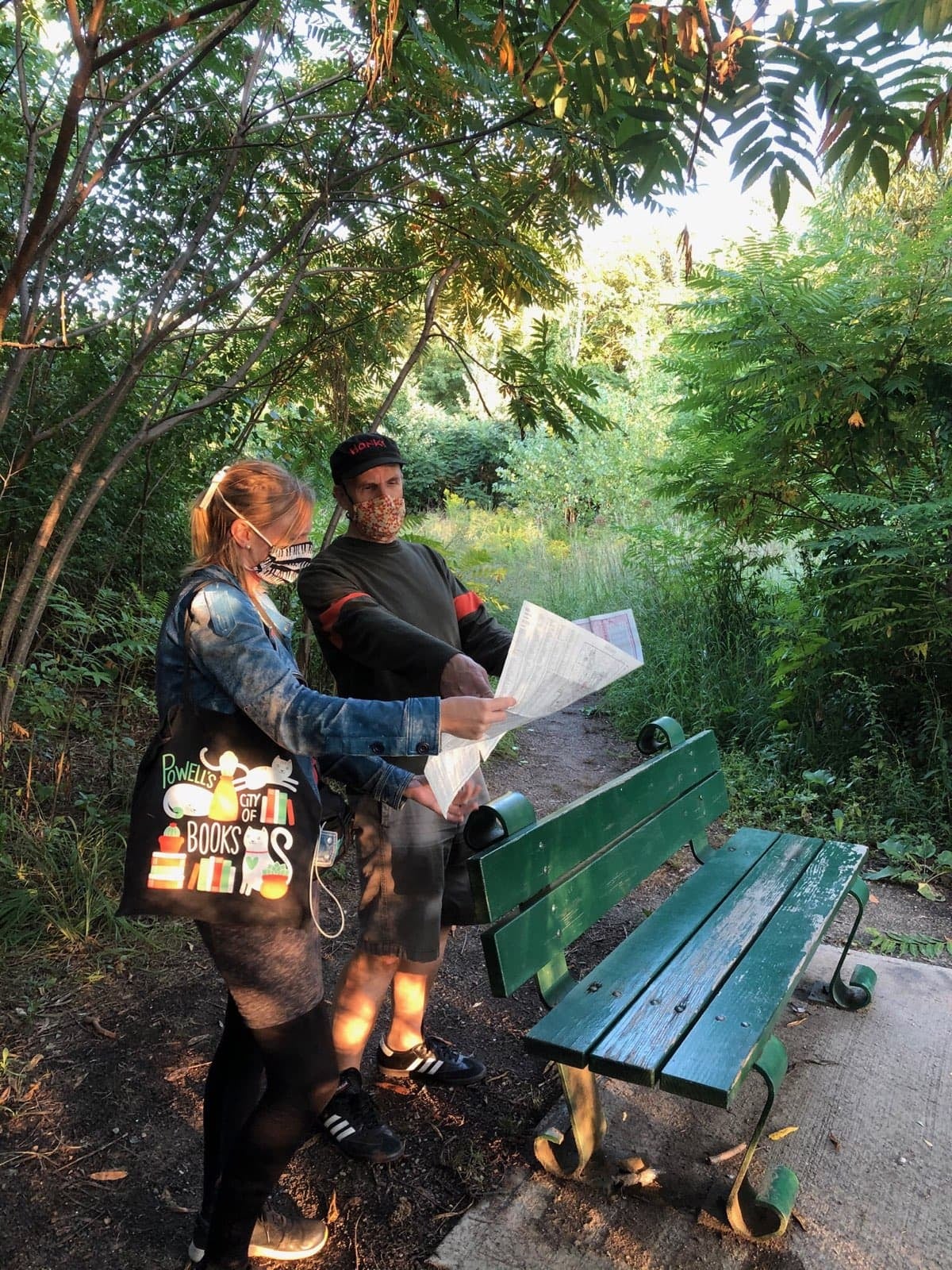 Sophie Crafts on a walk with a friend by Blair Pond in September. 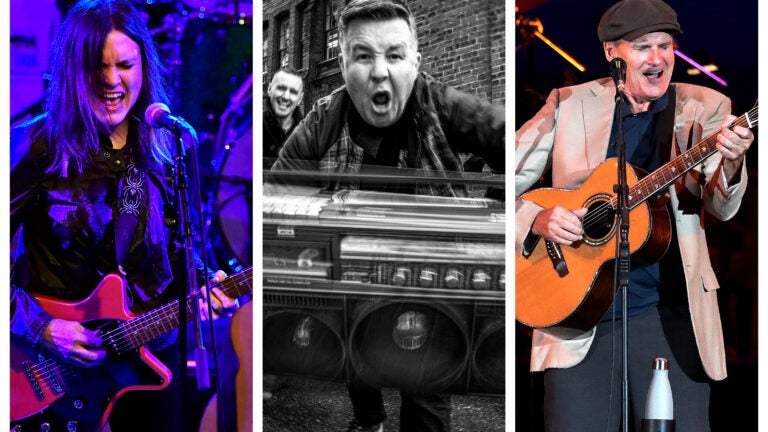