When Anthony Dugas, of Hudson, posted a TikTok video in 2020 of his 4-year-old daughter, Meiah, competing in a roller skating race, it went viral. He recently posted it again, and the video was picked up by the ‘Today’ Show on Monday morning.

In the video, Meiah falls down at the beginning of the race at Hudson’s Roller Kingdom, but then picks herself up quickly, rejoins the race, and wins the competition.

“It went worldwide viral,” said Dugas, a professional DJ. “I had major news outlets from India and Russia and all these places reach out to me. At first I really just thought it was the fact that she was so little and won the race. But a lot of people said it was truly inspirational.”

When Meiah fell, she looked over at her dad.

“She has always been the nervous type to do the races. I was just like ‘Go, go, go, go!’ instead of [asking] ‘Do you need help?'” Dugas said. “She just darted. I didn’t expect her to get up and go. She didn’t freak out. I was proud of her.”

Dugas posted the video on social media again recently, writing: “For those who remember this, Meiah was only 4 years old. It was a race for kids up to 8 years old. This video has been seen more than 500 MILLION times since it was released in 2020. It’s now going viral again and I want the world to see how much of a fighter she is.”

Dugas said he calculated the 500 million number from the various accounts that posted the video, including Sports Center and ESPN.

Co-host Savannah Guthrie said about Meiah: “I love her. I love her look, love her skates, love her speed, love her sass. The whole thing.”

Meiah is now 7 years old and entering the second grade this fall. She’s been busy making more videos with her dad and 8-year-old brother, Jackson.

“She’s loving it,” said Dugas about the public’s response to the video. “She’s taken pictures with people. She’s like, ‘I feel like JoJo Siwa.'” 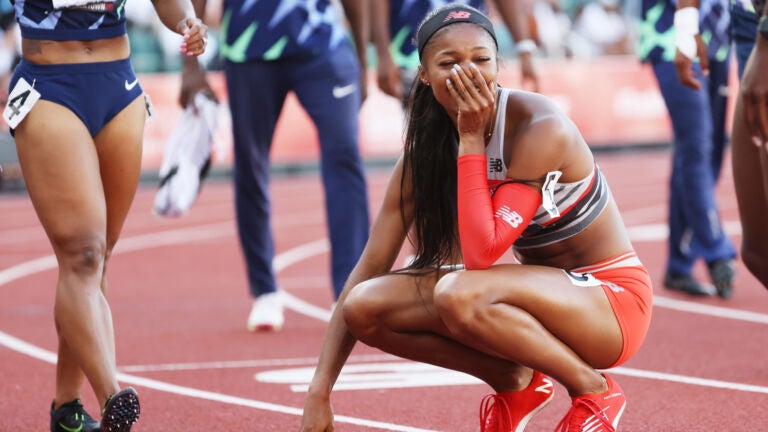