If you’re looking for a bar or restaurant to watch the Celtics play on any given night, NBA Finals appearances notwithstanding, there’s a lot to consider: Which bar has the best food? How many TV screens are there, and how big are they? Will there be just enough rowdy Celtics fans to create a festive atmosphere, but not so many that a fight breaks out during the fourth quarter?

Any given Cs fan will have different answers to these subjective questions, and we wouldn’t dare try to turn anyone away from their favorite local watering hole. But for those looking for a new game-day spot to watch Tatum, Brown, and co., these five sports bars will do the trick.

Fans had less than a full season before COVID hit to enjoy the massive “Dream Screen” television at Banners, a 39.5-foot display billed as the biggest in-restaurant LED TV on the East Coast. With its incredible proximity to TD Garden inside the Hub on Causeway development and added perks like TopGolf suites, you can bet on mixing with ticketholders to home games both before tip-off and after the final horn. (82 Causeway St., Boston; 617-263-8200)

If you emphasize the “party” in “watch party,” head to The Greatest Bar, a West End sports bar that doubles as a nightclub. As video from a recent Cs playoff game shows, The Greatest promises a packed house and rollicking atmosphere on game nights. Living up to its nightclub half, the bar will charge a $10 cover for its Game 3 watch party. (262 Friend St., Boston; 617-367-0544)

If you’re looking to catch a game with hundreds of screaming Celtics fans, look elsewhere. A visit to this Inman Square spot with a dozen TVs and 20-plus beers to choose from is like watching a game in your living room — if your living room were packed to the gills with some of the most knowledgeable hoops fans in the city. Get there early if you want a seat. (3 Beacon St., Somerville, 617-576-0231)

The Cask ‘n Flagon may be known as a Sox bar, but the Fenway watering hole will still be rocking during Celtics games. If you’re looking to avoid some of the insane downtown crowds and the inevitable prevalence of baseball on the screens, the Marshfield Cask ‘n Flagon has 122 TVs and doesn’t fill up quite like the Fenway one does. (Fenway: 62 Brookline Ave., Boston, 617-536-4840; Marshfield:804 Plain St., Marshfield, 781-834-2275) 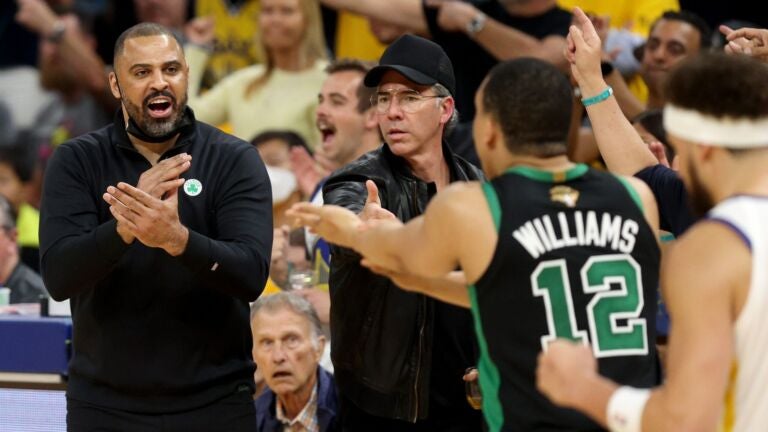 Celtics collapse again in the fourth quarter, lose Game 5 to go down 3-2 in NBA Finals