BOSTON (AP) — Ernest Hemingway penned 47 possible endings to A Farewell to Arms, eight of which are on display at a new exhibition on the famed American writer at the John F. Kennedy presidential library — along with the one that actually concluded the classic World War I novel.

“If a person wants to make their mark as a writer they have to work very hard, and this exhibit really shows how hard he worked,” said Patrick Hemingway, the author’s only surviving child who on Tuesday toured the exhibition that opened Monday in Boston and runs through Dec. 31.

“He always felt responsible for being where the action was,” said the 87-year-old Hemingway. “A lot of writers just retire to their rooms and describe their childhood. He didn’t do that.”

The Kennedy library, which opened in 1979, is a repository for the world’s largest collection of documents, photographs and personal mementos belonging to the literary icon. The collection is one of the library’s “greatest treasures,” said curator Stacey Bredhoff.

Hemingway and Kennedy never met, but the late president was clearly an admirer. Kennedy wrote Hemingway for permission to use his oft-quoted phrase “grace under pressure” in the opening to Kennedy’s own Profiles in Courage. Hemingway was too ill to accept an invitation to JFK’s January 1961 inauguration, and would commit suicide later that year.

Along with the multiple proposed endings to A Farewell to Arms, highlights of the exhibit include Hemingway’s first short story, published in 1917 in a high school literary magazine; a draft of his first Nick Adams story, written on Red Cross stationary at an Italian hospital where Hemingway was recovering from wounds suffered while serving as an ambulance driver during World War I; correspondence with other literary figures from his time as a member of the so-called “lost generation” in Paris; and ticket stubs from some of the many bullfights he attended.

“I am very pleased that they were able to put together in my lifetime a very comprehensive picture of a person who really represented very well the first half of the 20th century,” said Patrick Hemingway.

The story of how Hemingway’s papers ended up at the Kennedy library carries overtones of modern-day developments in the long and complex relationship between the U.S. and Cuba.

Hemingway abandoned Finca Vigia, his Cuban home, at the time of Fidel Castro’s revolution, leaving behind much of his personal estate.

After his death, Kennedy, despite the extreme tensions that followed the Bay of Pigs episode, gained permission for Hemingway’s fourth wife and widow, Mary, to go to Cuba to collect her husband’s belongings, which were then shipped from Havana to Florida on a shrimp boat.

In the years following Kennedy’s assassination, Mary Hemingway established a relationship with Jacqueline Kennedy Onassis, leading to a decision to archive the collection at the presidential library.

Patrick Hemingway, who now lives in Bozeman, Montana, is seen in one photograph as a young child with his father and two siblings aboard a deep sea fishing boat, another of Ernest Hemingway’s passions.

“He worked very hard in the morning but he never worked in the afternoon. He had a great life,” Hemingway said of his father. 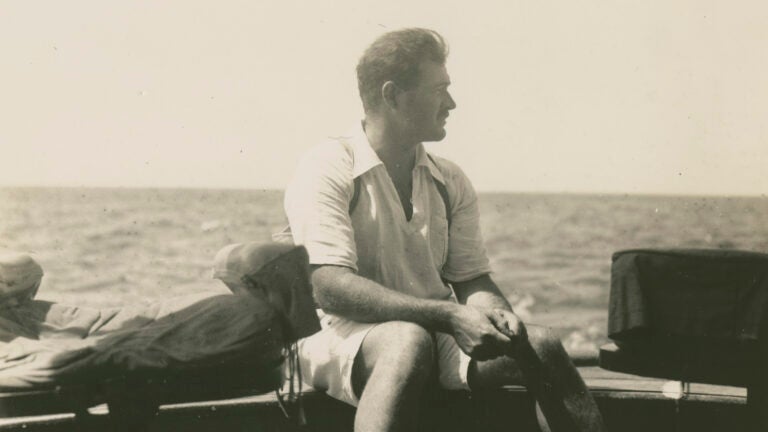