Night owls awake in New Hampshire and Maine got a special show after midnight on Tuesday when a “fireball” streaked across the sky.

Sgt. Tim Farris was on patrol for the Portland, Maine, Police Department watching for speeders when his dashcam caught the fiery streak. The “meteor (or alien spaceship),” as the police department’s Facebook described it, lit up the sky around 12:30 a.m.

You never know what you are going to see on duty. Sgt. Farris was looking for speeders while parked in front of the central fire station and was able to observe some visitors “from away”….far away. The meteor (or alien spaceship) was caught on camera at approximately 0050 hours. Let’s hope the visitors are friendly. They could just be some of Stephen King’s friends on their way to visit him. Whomever they are I’m sure we could win them over with a whoopie pie. P.S.The voice on the video stating, “oh my God”! is from Ofc. Hults. Apparently he was amazed. #meteor #starwars #underthedome

Posted by Portland Maine Police Department on Tuesday, May 17, 2016

“Let’s hope the visitors are friendly,” the post continues. “They could just be some of Stephen King’s friends on there way to visit him. Whom ever they are I’m sure we could win them over with a whoopie pie.”

Reporters in Maine and New Hampshire also described the celestial sight as a fireball. According to the American Meteor Society, a fireball is another term for a very bright meteor.

Though Mount Washington Observatory in New Hampshire was shrouded in fog and unable to see the streak, they posted to Facebook that they were also getting preliminary reports of a fireball and encouraged anyone who witnessed it to report it to the American Meteor Society.

The Sabattus, Maine, Police Department also caught the midnight meteor on a dashcam as it brightened the sky.

The flash was reportedly visible in all of New England, as well as in parts of Canada, and down to New York, New Jersey, and Pennsylvania, according to the American Meteor Society, with more than 150 sightings reported last night.

“One of the most amazing things I’ve ever seen in the night sky,” one witness from Framingham reported. “I was driving east on the mass pike heading home when there was flashing behind me, then the sky in front of my car started to light up. Looking out my left car window I could see what seemed to be a large greenish fire ball breaking apart and moving very fast heading to my best guess east or northeast almost the same direction I was going.” 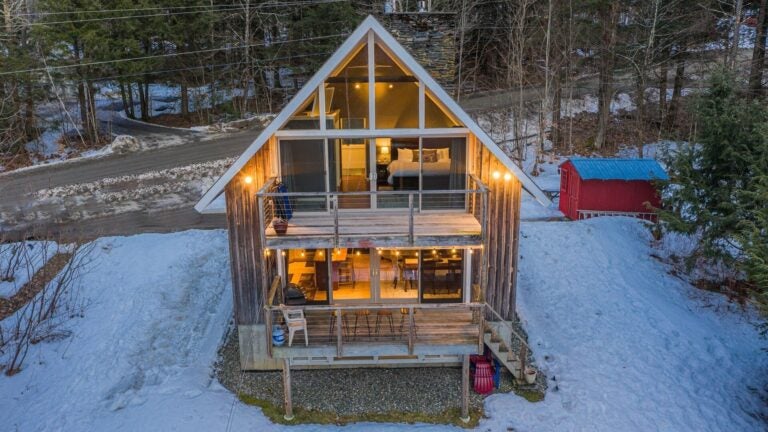 Chalets are trending on Vrbo. Take a peek inside 7 popular New England stays.