Have fireworks been causing you to lose sleep lately? You’re not alone: City officials say fireworks complaints in Boston are up 5,543 percent from this time last year.

We recently asked readers if they had been hearing fireworks go off in their neighborhoods at night. Out of 420 respondents, 94 percent confirmed they were hearing fireworks, from the occasional bottle rocket to M-80s almost every night. Many people complained about the fireworks making them lose sleep, or scaring children, pets, and people with PTSD.

Below, we share some thoughts from Boston.com readers on the night time explosions.

Many confirmed hearing fireworks and reacted with feeling mild annoyance to complete exhaustion.

“During the day it’s a mild annoyance. After 9PM it is a significant bother, as my wife and I are healthcare providers who need to get to work early and having loud fireworks go off makes it hard to get to sleep,” said Dan in Charlestown.

“The hardest part for me is seeing how the loud booms and cracks are tormenting my dog. Her distress makes me feel distressed…I became used to fireworks once or twice a week throughout the summer when I moved to Dorchester several years ago; it was usually weekends and my dog and I could deal. But EVERY. SINGLE. DAY. is another story. I also feel paranoid about the fire hazard as it is not just parks and fields; people are setting off fireworks in their yards right in our neighborhood. I realize it perhaps has become a stress release for those setting them off. The constancy, though, has become an added stress during this already immensely stressful time,” said S in Dorchester.

“It’s been every night and all hours starting in the mid to late evening before the sun even goes down and last[ing] until 4-5 in the morning. And as a[n] essential worker of the hospital who has been working this whole pandemic and not getting sleep or being woken up by them and how loud they are it’s very taxing to then wake up at 4 am and there still going to then go to the hospital and have to tend and care for sick patients. Something needs to be done,” said an anonymous respondent in Roxbury.

“Fireworks have been going on for weeks on end in Quincy, starting before the sun even sets, and going on until 2:00 or 3:00 a.m. I am utterly sleep-deprived since sidewalk construction in my neighborhood has been starting at 6:30 a.m. and I’m getting about 3.5 hours of sleep. My pets have been frightened by the noise and I’m sick and tired of it. Who has that much money to spend on blowing things up all night? I’m lucky enough to still be employed and I’m making stupid mistakes at work because I’m totally exhausted. They need to find the source and end this foolishness. Fireworks are not “fun,” they are ILLEGAL,” said Amy L-K in Quincy.

“My family adopted a second greyhound when it became apparent that we were going to be working from home for the foreseeable future. The new guy is not a fan of fireworks, even with us using calming treats and a thundershirt. The fireworks are completely unpredictable – 10pm, midnight, 3am, 5am… He barks and whines every single time. We love our new addition, but we’re exhausted!” said Erin OConnor in Roslindale.

“I’m exhausted, but I feel even worse for the people living in the new veteran’s housing nearby. It’s cruel and selfish to be setting off fireworks every night in such a populated area,” said Mollie in Brighton.

Some people reported hearing fireworks, but said they aren’t bothered.

“I actually love them. I find it to be comforting and joyous in a stressful time,” said Chase A. in Allston.

“I’m ok but my roommate’s cat is not. I like seeing the fireworks and I’m a sound sleeper so it doesn’t bother me. Feel bad for the cat though,” said Tanya Raymond in North Cambridge.

“Not bothered at all. Fireworks represent freedom in this country. Hearing them is a comfort to me. Just hope no one is hurt and no fires are started,” said Steve in Dorchester.

Others weren’t bothered by them because they believe it’s a part of ongoing Black Lives Matter protests.

“I am actually glad they’re still going; they’re part of the protest. Police are powerless to do anything to stop them and now feel a fraction of what BlPOC have felt. Similarly for those disturbed in their homes, your home is your place of sanctuary, your place of safety – consider Breonna Taylor who was murdered while asleep in her own home, when the police already had the suspect in custody. Until BIPOC [Black and Indigenous people of color] can get peace in their own homes, why should anyone else have it?” said T in the South End.

“When they first started I was frightened. My building overlooks a shopping center and the windows were boarded up creating this feeling that danger was just around the corner. Now that I understand that the fireworks are a symbol of protest I am occasionally disturbed but more than that I am glad that we have an enduring reminder of the massive task ahead of us as a nation. I fear that when George Floyd and others fade out of the news cycle we will all lose motivation to engage in uncomfortable conversations,” said MW in Brookline.

“Personally not bothered, and even support them if they’re part of a larger BLM protest (as I’ve read that they are), but still concerned about people closer to the sites with health issues for whom sleep is needed,” said Jason in Jamaica Plain.

“No justice, no peace. Everyone is upset that they’re being kept up at night by fireworks- boo hoo! How upset are some of these people that communities impacted by gun violence experience this on a far more significant and traumatic level? You want to sleep at night? Address Injustice,” said Harvey Pequod in Boston.

“This is a form of protest, and if people (read: KARENS, the lot of them) are complaining, they should reflect on the point. It’s *meant* to make you feel uncomfortable, and it’s nothing in comparison to the kidnapping, slavery, abuse, disfranchisement, violence, imprisonment, racism, and MURDER Black people have had to endure for 4+ centuries. Talk about feeling uncomfortable. FELLOW WHITE PEOPLE: Think before you speak,” said Brittany in Brighton.

Still, others were curious about where people were getting fireworks, or wondered how they were affording so many of them night after night. Conspiracy theories about the fireworks have popped up around the country in recent days.

“This appears to be a concerted effort in many parts of the country. Why?” asked DG in Brookline.

“The police are setting them off and I wouldn’t be surprised if they were the fireworks that many cities already prepaid for their fourth of July celebrations that can’t happen this year. They are using it as a tactic to deter protesters from using their constitutional rights,” said Sam in Franklin.

Do you want to weigh in about your experience with the fireworks? Tell us what’s happening in your neighborhood in the poll or comments below. 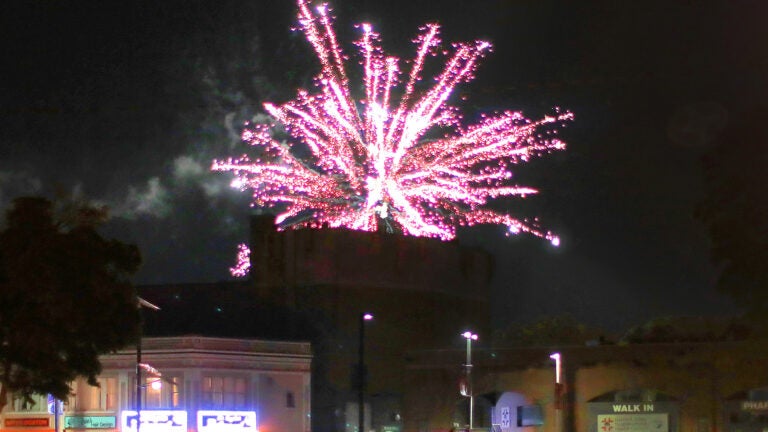 What Boston is doing about the ‘out of control’ fireworks