“I was sitting in my chemistry class and I turned to my friend and I was like, ‘Phoebe Bridgers just quote tweeted a photo of me,'” said Robbie Deaderick Layman, a 17-year-old at Cambridge Rindge and Latin.

But by the end of the period, Deaderick Layman was explaining who Phoebe Bridgers was to her class, at the request of her teacher.

“She was attempting to embarrass me, but I was like ‘I will gladly tell everyone about one of my favorite musicians,'” Deaderick Layman said.

The story behind Bridgers’s tweet, which now has over 44,700 likes, starts with a photo taken by one of the teen’s mothers following Bridgers’s concert.

“I was sitting across from them on the red line there and I was like, ‘Oh, look at them they’re so cute,’ and so I took the picture,” Felicity Lufkin said, mother of one of the teens.

The four teens — listed from left to right — are 16-year-old Juli Berndt, 19-year-old Mason Newbury, Deaderick Layman, and 17-year-old Kali Johnston, Lufkin’s daughter. The group of teens were on their way home from the concert at Boston’s Leader Bank Pavillion on Sept. 26.

“It was all focused on the kids you know, how cool and cute they were,” Deaderick said.

The picture made its way to Lufkin’s Instagram and then to Robbie’s mom, Jen Deaderick, who tweeted it.

“This picture my friend took of the kids last night after the @phoebe_bridgers concert is just perfect,” Deaderick captioned the photo.

After a small response from Deaderick’s followers, Bridgers herself liked the tweet. Then, Bridgers quote-tweeted Deaderick.

“I woke up and saw that Phoebe Bridgers had liked the picture and then there started being a response to it, all these people started responding to it,” Deaderick said. “And then the next thing we knew she had retweeted it and then all heck broke loose. It was very funny.”

“y’all would’ve bullied me in high school,” Bridgers wrote, in reference to the photographed teens.

Deaderick Layman immediately sent the tweet to a group chat of the teens. Two of the teens had not even realized the photo was taken.

While they enjoyed the interaction, the teens and mom were quick to assure Bridgers they would not have bullied her in high school.

“I promise you they wouldn’t have. They’re all very sweet,” Deaderick replied to Bridgers’ tweet. “Your show was fantastic. Thank you.”

“i promise you i wouldn’t bully u i was so lame in high school,” Newbury wrote.

“I really wanted to chime in and be like, please don’t like judge me based off one photo that you see,” Berndt said, who admitted the other teens were more familiar with Bridgers’ humor than she was.

Other users on Twitter are comparing the pictures of the four teens to a viral Tumblr-era photo of “five edgy teens.”

“As one of the people in the original photo: absolutely,” Deaderick Layman responded to one comparison.

Other users, who were also unaware of Bridgers’ sarcastic tone, worried she was making fun of her fans and accusing them of looking like bullies.

“A lot of people are in her replies being like, ‘why are you being mean to teenagers,’ but not me,” Newbury said. “I think it’s funny.”

“There was this whole generational divide, which I thought was really funny,” Deaderick said. “All the parents got concerned about the kids, that she said that they look like bullies. And the kids were like, ‘no, no, no, because that’s just her humor, that’s a cool thing.'”

“People are getting offended on our behalf — which is nice, I guess — but it’s just a great example of how Twitter works,” Deaderick Layman said. “Nobody actually involved is upset but other people are.”

Others responded with photos of Bridgers in high school, many jokingly agreeing with the singer’s tweet.

“i didn’t say it you did,” one twitter user wrote.

“exactly,” Bridgers wrote in response to one photo of her in her teenage years.

Despite the response, the teens agreed they found the experience enjoyable.

“It just got crazier and crazier throughout the day,” Deaderick Layman said. “People were recognizing me in the hallways and whatnot, and yeah it was weird.” 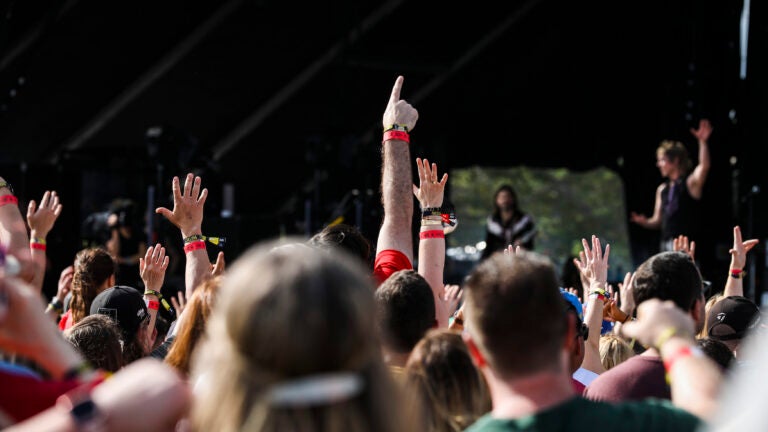