Grace Gagnon will ring in the New Year in Bath, England after agreeing to swap her studio on Boston’s waterfront for a stranger’s flat, a la the hit 2006 romantic comedy “The Holiday.”

The 25-year-old’s overseas adventure started over Thanksgiving, during her first viewing of the movie, which stars Cameron Diaz and Kate Winslet as two women who agree to swap homes over Christmas. Feeling inspired, Gagnon posted her own call out as a joke to her 800 TikTok followers, never expecting it to go viral — let alone bag her a trip across the pond.

“Anyone in England want to switch places for the holiday?” Gagnon wrote while panning across her apartment. “I have a studio apt on Boston’s waterfront.”

When Gagnon woke up the next day, she found her video had garnered tons of attention.

As her plan picked up steam and offers trickled in, Gagnon documented her experience, asking her followers to help her decide on a holiday swap partner. Gagnon shared her top locations — namely, anywhere in the United Kingdom — and commenters weighed in on where they thought she should go.

“I feel crazy,” said Gagnon in a Dec. 9 follow-up Tik Tok video. “Seventy-two hours ago I was working from home, getting ready to go to the gym, hit up Whole Foods, cook dinner, read a little bit, go to bed… Flash forward to today and I’m literally booking a last-minute flight to Europe for New Year’s Eve, all thanks to TikTok. I’ve been shaking with excitement all day.”

During an interview on The Drew Barrymore Show on Dec. 21, Gagnon revealed she had chosen a destination — she decided on Bath, England.

Gagnon told Barrymore that hundreds of people were down to swap homes with her. She sent the top candidates a Google form asking them to detail their location, whether they’re traveling with someone, whether they have pets, roommates, or nearby transportation. She also asked candidates what they hope to experience from the situation.

After narrowing her candidates down to about 10 people, Gagnon settled on Flo, another woman in her 20s who was one of the first interested parties to reach out. The pair instantly clicked over FaceTime.

“It felt like I was talking to one of my friends here,” Gagnon told the Boston Globe of her conversations with Flo. “It was just a gut feeling. We have so much in common.”

Gagnon chose the picturesque Bath location because of its beauty, and its connection to one of her favorite TV shows.

“When [Flo] sent me photos of Bath, I immediately knew I had to go there. Especially since I love (the show) Bridgerton, and I know it was filmed there,” Gagnon told Barrymore.

To keep their homes and valuables safe, Gagnon and Flo are using HomeExchange, a service that helps people exchange homes for vacations.

“I don’t want to get bamboozled, which I know a lot of you were worried about in my comments. Don’t worry, we won’t make this a bad story. Hopefully, it’s like Hallmark, instead,” Gagnon said in one of her videos.

During her interview, Barrymore gave Gagnon this advice from her friend, Cameron Diaz: “No matter what, follow your heart,” said Barrymore, adding, “And [Diaz] said that applies to everything you’re about to embark on. That, hopefully, will lead you to all the right places.” 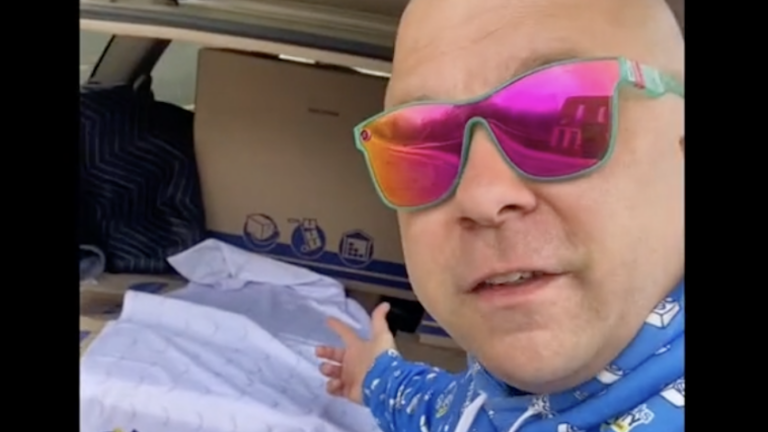 TikTok creator delivers $5,000 in Legos to kids at MGH