The mural, painted by Boston-based muralist and graffiti artist Percy Fortini-Wright, is now on display at MIT-owned 139 Main St. in Cambridge.

“Charles Gate” is meant to connect the Cambridge community to the larger Charles River watershed by drawing on the synchronicities between the local ecosystems and residents, according to a news release.

By using familiar images like the Red Line, the mural makes connections from parts of Cambridge to the natural environment, splicing buildings and trains with fish, birds, and water, the release said.

“My objective was to convey a mural that connects the Charles River to the Kendall and Cambridge neighborhoods. Many people may not realize that the Charles River ecosystem is as diverse as the people who live here in the city itself. I see it as a window, or portal, connecting worlds.” Fortini-Wright said in the release.

“The fish flying and the birds lower to symbolize seeing things from different perspectives. The half sun embodies the rising sun and setting sun. The fish, birds, and suns are meant to represent the idea of finding equilibrium within.”

Fortini-Wright, whose work has been featured in The New York Times, The Boston Globe, The Boston Herald, and Improper Bostonian, also said he was inspired by his time fishing and painting along the Charles and in Cambridge.

“Percy is a legendary artist whose work frequently depicts the convergence of the built environment and nature,” Now + There Curator Leah Triplett Harrington said in the release. “With ‘Charles Gate,’ he makes it personal to the Charles River where he’s spent so much time.”

“Charles Gate” is a temporary mural commissioned by the MIT Investment Management Company (MITIMCo) and curated by Boston-based nonprofit Now + There.

The building housing the mural was built in 1873 and restored in 2019. It has been in use since its construction.

“We love seeing the connections to the Charles River and Cambridge in this work,” Steven Marsh, Senior Vice President at MITIMCo, said in the release. “We’re already witnessing so many of our friends, colleagues, and neighbors discovering something new and compelling every time they walk by it.” 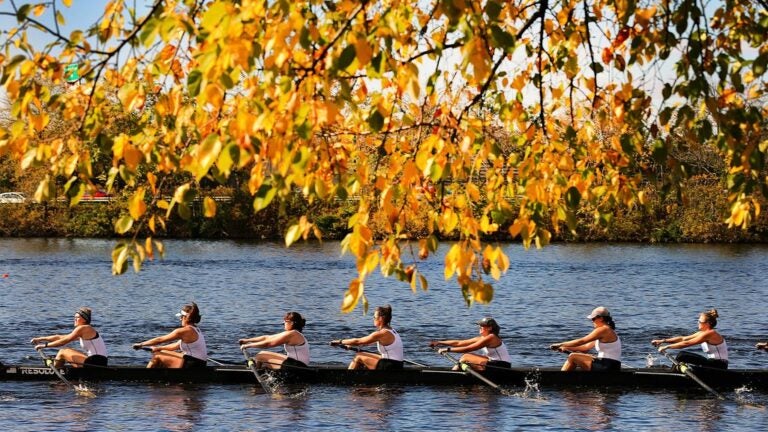 Your guide to the 2022 Head of the Charles: Schedule, where to watch, and more