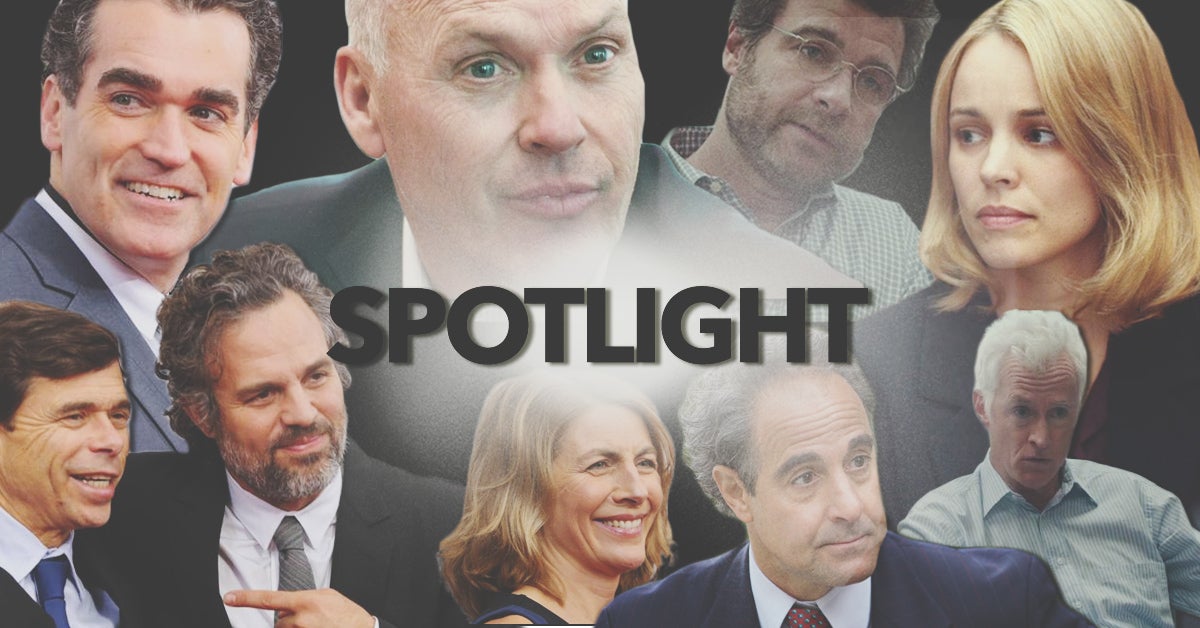 Welcome to everything Boston.com has ever covered on Spotlight. The movie by Tom McCarthy and Josh Singer — which follows Boston Globe reporters as they unearth a sex abuse scandal in the Catholic Church and decades of cover-up that goes as high as the Pope — gained loads of recognition when it was released in November 2015.

Though Spotlightdidn’t come out too hot at the Golden Globes in January, things might turn around at the Academy Awards. The movie was nominated in six categories, including Best Picture.

Here, a few reads to brush up on as we near the end of awards season.

Early reviews of Spotlight were glowing.Critics raved about the movie, calling it “the year’s least relaxing film’’ and “steadily riveting.’’

Spotlight is engrossing–and complex. Here’s the primer you need before you see it. A no-spoilers guide to understanding a few events before you watch.

The story behind the most disturbing conversation in Spotlight. The real Boston Globe columnist and reporter Sacha Pfeiffer and the movie’s co-writer Josh Singer give insight on the case of Father Paquin.

How Harpoon IPA became Spotlight’s beer of choice. The filmmakers tried to present authentic Boston at the turn of the millennium, a time when Harpoon was just expanding in New England.

The true story behind that Catholic priest “rehab house’’ in Spotlight.Matt Carroll discovers a “rehab facility’’ for priests accused of sexual abuse is in his neighborhood. This is what happened to that house.

Boston Society of Film Critics award Spotlight Best Picture. The movie came out on top in a few categories.

The most Boston moments in Spotlight. We scoured the movie looking for the most quintessential local things Bostonians might recognize — from Santarpio’s to 93 traffic to the Big Dig.

Mark Ruffalo told us this particular scene in Spotlight really moved him. He also said why there’s a little bit of him in his portrayal of Globe Spotlight reporter Michael Rezendes.

WHAT OTHERS SAID ABOUT IT

This is the one scene former Globe editor Marty Baron wanted in Spotlight. Baron, who is now the executive editor of The Washington Post, reflects on the one real-life event that still upsets him all these years later.

Here’s why the fourth member of the Spotlight team has been pretty quiet.Matt Carroll, one of the four Spotlight reporters, kept to himself during the movie’s marketings efforts.

Cardinal O’Malley releases a statement on Spotlight. “The Archdiocese of Boston is fully and completely committed to zero tolerance concerning the abuse of minors,’’ he wrote in part of his statement.

Survivors of clergy sexual abuse discuss how Spotlight portrayed their trauma. Survivors spoke with Boston.com reporter Allison Pohle about their reactions to the movie, and whether they feel the movie raises awarenesses about sexual abuse.

The Yankees declined an opportunity to appear in Spotlight.They didn’t want to associate themselves with the subject matter.

Jack Dunn disagrees with how he was portrayed in Spotlight. “It makes me look callous and indifferent,’’ the Boston College spokesperson said in a statement.

For the real Spotlight team, the end of the movie was only the beginning. The movie’s co-writer Josh Singer and the real journalists reflect on what happened in the wake of their first story on sex abuse in the Catholic Church.

Spotlight, The Martian both got a whole lot of Oscar nominations. Spotlight picked up six.

Michael Keaton calls out ‘powerful who take advantage of powerless’ in SAG speech.Spotlight took home the award for Outstanding Performance by a Cast in a Motion Picture at the Screen Actors Guild Awards.

Despite the hype, Spotlight goes trophy-less at Golden Globes. It was the defeat no one expected.