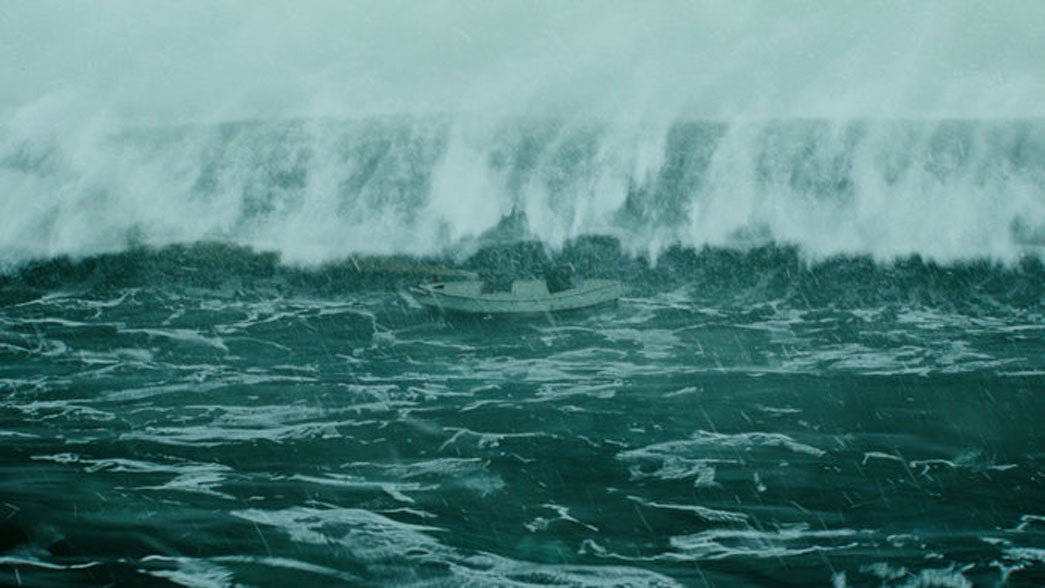 A scene from “The Finest Hours.’’

QUINCY, Mass. — “The Finest Hours,’’ which opens Jan. 29, is very closely based on a real-life rescue that took place at sea in February 1952, when, during a nor’easter at least as fierce as the one immortalized in “The Perfect Storm,’’ not one but two oil tankers broke apart off the coast of Cape Cod. They were T2’s, ships hastily built of inferior metal during World War II and sometimes known as “serial sinkers’’ for their tendency to snap in half during cold weather.

One of the broken ships, the Pendleton, drifted perilously close to the shoals off Chatham, Massachusetts. The captain and seven others in the bow section were lost, but the 33 sailors trapped aft maintained electric power for a while and were even able to navigate after a fashion until the hull began flooding and drifted so close to shore that people could glimpse it from the beach.

All the available cutters were busy trying to rescue the other tanker, so as darkness fell the Coast Guard sent a 36-foot wooden motor lifeboat operated by just four young crewmen. That the little boat, with the utilitarian name CG36500 (CG for Coast Guard, 36 for its length and 500 for a serial number), made it out to the Pendleton, let alone back with all but one of the 33 stranded sailors, is still a source of wonder to naval historians, who consider this the greatest small-boat rescue ever.

Visibility was poor, with snow driving almost horizontally, and waves cresting at close to 70 feet. Crossing the Chatham shoal, the CG36 rolled over twice, and the compass and windshield were smashed. Several times, the engine stalled, and the youngest crewman, Andy Fitzgerald, had to crawl into its compartment and reprime it, severely burning himself. Afterward, everyone associated with the rescue believed that it was only the helmsmanship of Bernie Webber, the skipper, that kept the motor lifeboat from swamping. As the Pendleton crew, spotting the rescuers, began clambering down a rope ladder jumping some 70 feet into the sea, it was Webber who made the decision to pick them all up, even though the CG36 had an official capacity of just 12 and would be wallowing up to the gunwales. He didn’t think he could make it over the shoals and back out a second time.

The Pendleton rescue made the front pages. In The Times it ran right next to an article about bank robber Willie Sutton. But in time it was largely forgotten, except by cranky, nostalgic New Englanders like my father, a wooden-hull Navy vet, who insisted that the CG36, a descendant of the wooden surfboats that were launched off the beach in 19th-century rescues, was superior to the steel-hulled vessels that replaced it in the ‘60s and should never have been phased out.

In the 1950s, even more than now, the Coast Guard was the lowly stepchild of the other armed services, not accustomed to blowing its own horn. And the Pendleton rescuers, Webber especially, were uncomfortable with the notion of themselves as heroes. They were just earnest young men grateful to have a job, even a hard, dangerous one, at a time when jobs were not so easy to come by in postwar New England. On their way out to sea that February night, they didn’t play rock music, as today’s Coasties might; they sang a hymn. 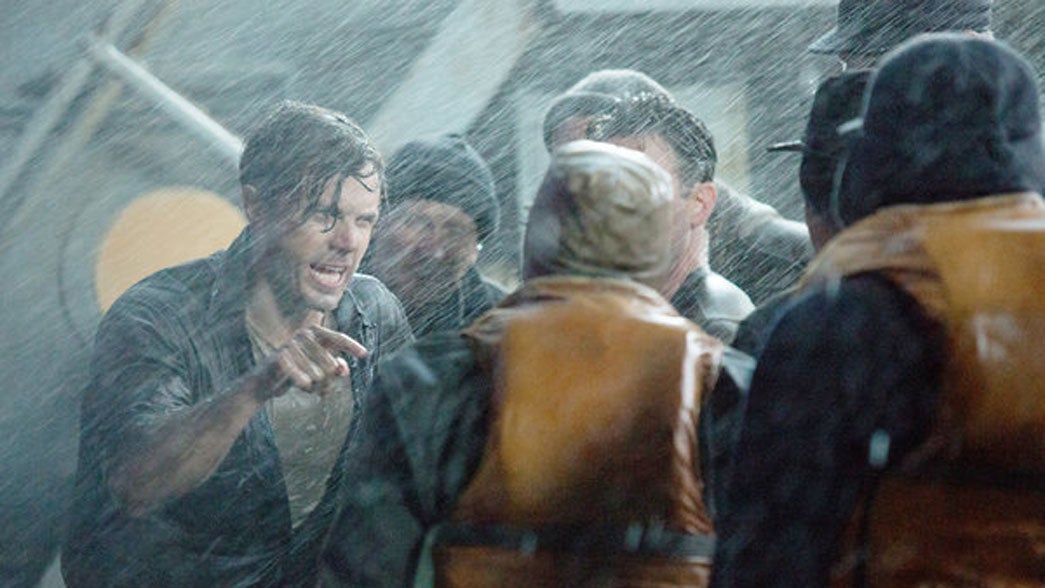 Casey Affleck in “The Finest Hours.’’

It was precisely the understated, throwback quality of the story that appealed to Disney, which produced “The Finest Hours,’’ and the movie (which takes its name from a history of the rescue by Casey Sherman and Michael J. Tougias) is in almost every respect an earnest, old-fashioned one. These days, however, to make a convincing movie about a storm at sea, even one that took place 60 years ago, you need technology that’s far from antique. The director, Craig Gillespie, pointed out recently that he was in postproduction for a year, far longer than he expected, and that just to get the waves right required almost 1,000 special effects shots. The film’s overall budget was about $80 million.

The movie, which stars Chris Pine as Webber and Casey Affleck as Ray Sybert, an engineer on the Pendleton who reluctantly takes command of the aft section, was mostly filmed in the fall of 2014 on a soundstage at the former Fore River Shipyard here. The place was so vast that production assistants scuttled back and forth on scooters and bicycles, and included an 800,000-gallon tank with wave and wind machines and what amounted to a giant, ceiling-mounted shower head. There was a dry-land replica of the CG36 mounted on gimbals that could make it roll and plunge, and another replica floating in the tank itself, where there was also a full-size, tiltable mock-up of the Pendleton hull. A replica of the Pendleton engine room, floodable and hydraulically shake-able, exact down to the grime on the gauges and rust on the pipes, was just a short hike away, as was a mock-up of the Chatham Coast Guard Station, dusted with unmelting artificial snow.

Much of the shoot required the actors to appear cold and wet, something that wasn’t hard to achieve. For some scenes, they were soaked with a hose even before the overhead shower was turned on. Most wore wet suits under their costumes and between takes wrapped themselves in sweatsuits and stuck their feet in Ugg boots. No one complained, and, Gillespie said, there was even a rivalry between the actors playing Coast Guardsmen and those on the Pendleton about who was suffering more. A couple of days when they actually shot outside were even worse, he added, when a real nor’easter blew in. 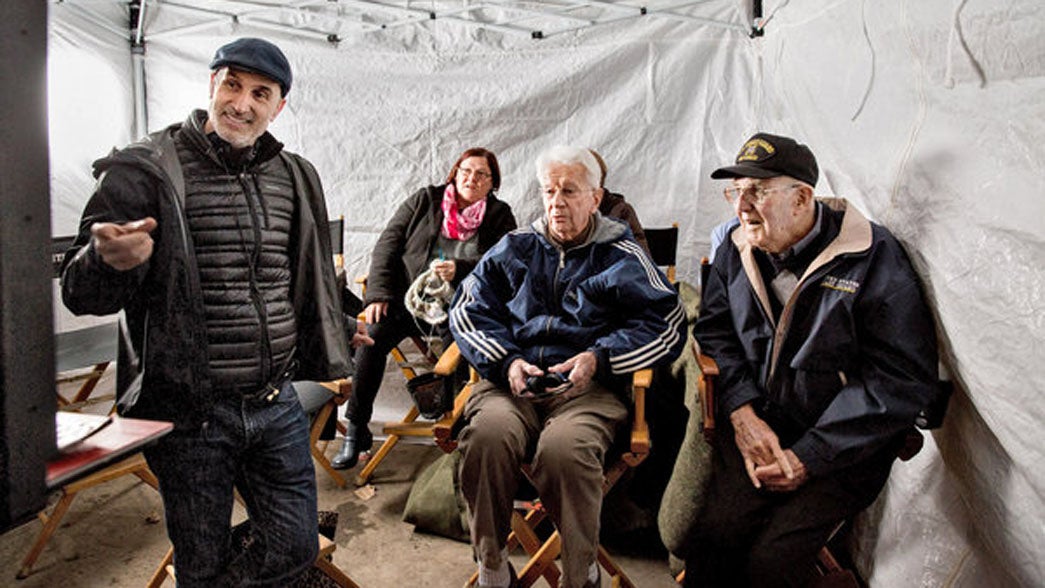 The director Craig Gillespie, left, with the Coast Guard veterans Andy Fitzgerald and Mel Gouthro on the set of “The Finest Hours.’’

“This is nothing compared to what those guys really went through,’’ Pine said between takes one afternoon as an assistant mopped his hair with a dry towel. “They were brave in ways we can’t even begin to imagine.’’

Affleck said of the hardship: “It gets sort of addictive after a while. There are fewer things you have to pretend.’’

Three of the four Coast Guard crewmen are now dead: Webber, Ervin Maske and Richard Livesey. But Fitzgerald is still alive, and he visited the set one day that September, as did Mel Gouthro, who was too sick to go on the rescue and whose place Fitzgerald took. “I was glad for the chance,’’ said Fitzgerald, now white-haired and in his mid-80s. “I was third-class, and most of the time all I got to do was paint the bottom.’’

Together with their wives, the men watched the filming on a video screen while sitting on director’s chairs in a small tented area with a heater. As imperturbable as they were in 1952, they seemed interested but not overwhelmed as their former lives were re-enacted. “It was also snowing then,’’ Fitzgerald said, pointing out one way in which the storm in the tank failed to live up to the original.

“We were cold and miserable, but we weren’t afraid; we couldn’t really see the waves,’’ he recalled. “We had complete confidence in that boat and in Bernie. We didn’t think of it as a suicide mission — it was just a job we had to do. I never thought of it as a big deal.’’ He paused and added: “My wife didn’t even know about it. I didn’t tell her until we had been married for about three years. I don’t know why. I guess because she never asked.’’