“Uncle Drew,” Kyrie Irving’s feature film debut that stars six current or former basketball players dressed up as senior citizens, is not a movie that will leave you with deep, existential questions as you exit the theater. But it’s still fun to chat about.

Does Kyrie make the jump from YouTube star to “certified actor”? Would we watch a sequel based around Shaquille O’Neal? Exactly how much did Nike pay to have their shoes be so relentlessly promoted throughout the movie?

In the spirit of Irving’s crossover into film, we pulled a bit of a Boston.com departmental crossover by sending Celtics beat writer Nicole Yang and entertainment writer Kevin Slane to see the film and share all the thoughts and not-so-deep questions that popped into their heads.

1. “I wonder how much retired Spurs center David Robinson bills for a few seconds of screen time.” – Nicole
As if the cast didn’t already make it obvious, the film’s opening — complete with ESPN’s “30 for 30” tag and a slew of cameos from commentators and former basketball stars — really hammers home the fact that this is a basketball movie.

2. “I’m getting ‘Coming to America’ vibes with this barbershop scene.” – Kevin
Shout-out to the filmmakers for their homage to two of the best to ever do the “young actors dressed up as old men” gag: Eddie Murphy and Arsenio Hall in the “Coming to America” barbershop scenes. In “Uncle Drew,” it’s J.B. Smoove cutting hair when Dax (Lil Rel Howery) comes to recruit some players for his Rucker Park team, but I could’ve sworn it was Murphy for a brief second.

3. “Why’d they have to make Lil Rel Howery so annoying?” – Kevin
He’s ridiculously funny every time he’s on-screen in “Get Out,” but he’s basically the straight man in “Uncle Drew.” He tries his best with the material he’s given, but I’m not a fan.

4. “Oh, hey, that Uncle Drew quote perfectly describes the 2017-2018 Celtics!” – Nicole
“It’s like a perfectly orchestrated symphony,” Uncle Drew says of how the game is supposed to be played. “Not any instrument is more important than the other.”

6. “Was that a shot at President Trump?” – Nicole
The antagonist says his degree is from Trump University.

7. “I really want to see Chris Webber slam dunk that baby.” – Kevin
You’ll have to watch the movie to understand the context, but C-Webb’s Preacher comes this close to baptizing an infant with a holy water slam dunk before Dax intervenes.

8. “We’re 40 minutes in and Nate Robinson has basically done nothing. And it’s perfect.” – Kevin
By this point in the film, the dude hasn’t moved from his wheelchair, but he was still getting me with these little touching gestures. Those mournful eyes! That handshake/hug with Kyrie? I’m tearing up.

9. “When Shaq gets on-screen, he absolutely dominates.” – Kevin
“Kazaam” was trash, but Shaq’s been doing movies for more than 20 years. He’s the real MVP, and this time there’s no Tim Duncan to steal any of his votes.

10. “Shaq won’t let his feud with Kobe Bryant die.”
During the team’s first scrimmage, Big Fella barks, “Pass the ball, Kobe!” when Uncle Drew is hogging it. Shaq’s got jokes! I wonder if he and Kobe ever talk? As in, “Hey, man, sorry about that rap song. The Icy-Hot fumes went to my head.”

11. “Can prosthetics melt during a basketball game in 100-degree weather?” – Nicole
Irving said he hated his mask this past season. I wouldn’t be surprised if he also hates playing basketball in costume. But he still managed to show off his handle and get some pretty impressive “buckets” off.

12. “I wonder if it bothers Kyrie that Uncle Drew wears No. 2 and not No. 11.” – Nicole
He was still a member of the Cavaliers when the crew started filming, so Irving isn’t wearing his current number in the movie.

13. “How far exactly did these old guys drive?” – Kevin
Other than Rucker Park, there aren’t any named locations in the movie, and the timeline is so confusing. Did they drive all the way to Los Angeles to pick up the Turner Sports crew? Or did they just drive really, really slowly around the tri-state area?

14. “With even an average script, ‘Uncle Drew’ could have been so much better.” – Kevin
I’ve lost count, but I’m pretty sure Uncle Drew has said the phrase “young blood” approximately 645 times so far. I guess that’s supposed to be his catchphrase?

15. “But seriously, why doesn’t the backboard ever shatter?” – Nicole
It would have been a nice — albeit dangerous — throwback moment after one of Shaq’s dunks.

16. “I know it’s supposed to be funny, but how did these guys lose to a team of preteen girls?” – Kevin
Shaq could literally stand still in front of the hoop and they’d lose. Yeah, yeah, they’re not playing as a “team,” whatever. I want to see Webber reject the crap out of one of these layups.

17. “Wow, these guys can really dance.” — Kevin
We already knew Shaq had serious moves (remember that time he had a dance-off with Gronk?) but none of the old-man ballers would be out of place on “America’s Best Dance Crew.”

18. “Kyrie the actor is more of a pure point guard than Kyrie the player.” – Kevin
Except for that early scene in which he schooled the “young blood,” Uncle Drew is basically a facilitator, just throwing verbal alley-oops to Reggie Miller and Shaq. If this script was more like the Celtics offense, he’d be getting 31 percent of the jokes.

20. “Speaking of, Brad Stevens is a way better coach than anyone on this team.” – Kevin
You’ve got an out-of-bounds play with the game on the line, and you draw up a play for the guy whose sad life has been defined by that time he got blocked on a game-winning shot attempt in high school and hasn’t played basketball ever since? Give Stevens the clipboard, please.

21. “Why didn’t they play Kyrie’s new song, ‘Ridiculous,’ earlier than in the second half of the credits?” – Nicole
Seems like a wasted opportunity to showcase an unexpectedly catchy tune! 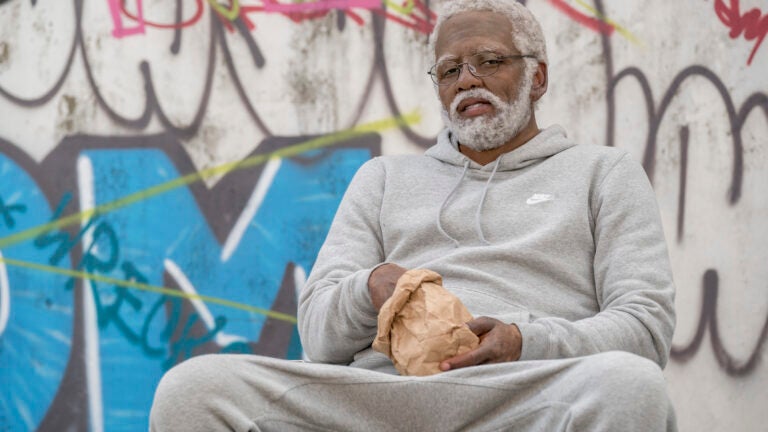 What critics are saying about ‘Uncle Drew’