There’s a chance Adam Sandler could land an Oscar nomination for “Uncut Gems” next month – perhaps a surprising development to those who can recall the comedian’s numerous nods from the Razzies, which parody traditional award shows by honoring cinema’s greatest failures each year.

While some point to Sandler’s dramatic turns in “Punch-Drunk Love” and “The Meyerowitz Stories” as proof of his acting abilities, sibling filmmakers Josh and Benny Safdie credit his comedy records and some sillier roles – including “Billy Madison,” “Happy Gilmore” and even the Razzie-nominated “Big Daddy” – as the reason they wanted him for their latest project. “Uncut Gems,” out Wednesday, stars Sandler as Howard Ratner, a jeweler in Manhattan’s Diamond District who tries to repay his gambling debts by auctioning off a long-sought-after rock from Ethiopia containing rare black opals.

As is to be expected, Howard’s convoluted scheme doesn’t quite go as planned – and the same could be said of “Uncut Gems” itself. The buzzy thriller, inspired by stories the Safdies’s father told them about his time working on the West 47th Street block, has been roughly a decade in the making. There were the usual delays – script rewrites and whatnot – but also the brothers’ tireless pursuit of Sandler.

“He can ground these insane situations in reality to the point where you care and you’re rooting for this character with all your heart,” Benny recently told The Washington Post over the phone. “That was something we knew was important for Howard. He’s going to test you, but you always need to love him and root for him.”

It took years to secure Sandler for a role that the Safdies, along with frequent collaborator Ronald Bronstein, seem to have written with the actor in mind. His team passed on the script upon first receiving it in 2011. It wasn’t until Sandler witnessed the giddy chaos of “Good Time,” the Safdies’s 2017 film starring Robert Pattinson as a bank robber that premiered at the Cannes Film Festival, that Sandler asked, per Benny, “Look, who are these guys and why do they want to meet with me?”

The answer surprised him – Howard, as Benny recalled Sandler saying, “is not a good guy.” The Safdies have continually described him as lovable, if not likable. He’s the lying, cheating, philandering protagonist of a film that Variety compared to a “protracted heart attack,” and yet you can’t help hoping his ploys work out in the end. Sandler’s magnetic screen presence is undeniable, but it’s his ability to make the careful distinction between lovable and likable that could cast him into the tight race for best actor.

“He could see it,” Benny said of Sandler. “It’s like Rodney Dangerfield, (Howard) gets no respect. All he wants to do is get to that seat at the table. He’s a dreamer and wants something larger than himself.”

While Sandler grounds “Uncut Gems,” his performance is just one of many out-of-the-box elements – the Safdies, for instance, rewrote parts of the script each time they cast a role. Howard’s wife, Dinah (Idina Menzel), and their children rose in prominence at Sandler’s request. The brothers asked Julia Fox, a newcomer who steals scenes as Howard’s mistress, how she would react to certain situations. The film takes place in 2012 in part because casting former Celtics player Kevin Garnett as a version of himself meant it would make sense to feature games from the Eastern Conference semifinals that year.

This all served a sense of realism, which extends to the frenetic soundscape, as well. In Howard’s store, which was built on a sound stage, you can hear five conversations at once, layered atop Midtown street sounds, Daniel Lopatin’s score and a high-pitched beep each time the showroom’s door opens.

Of that beep, Benny said: “To me, that’s the one sound that makes the entire space feel real. … When the front door is open, everybody needs to know. That little noise can do so much. It’s all in the details. When you add them together, it creates a full sense of the world.”

That world can be overwhelming to the senses, but then so can New York City. The Safdies depict their hometown with a gritty honesty perhaps akin to that of Martin Scorsese, an executive producer on “Uncut Gems.” At the mention of Scorsese’s name, Josh, who was sick at the time of the phone call and trying to rest his voice as much as possible ahead of recording DVD commentary, piped up anyway to praise “one of the masters and monsters of the art form.”

“When he got on board, it was a shot of adrenaline,” Josh said. “It raised the profile. When he puts his name on something and brings it up, he’s basically saying, ‘You should see this film.’ That’s unbelievable. Him putting his belief behind something means a lot. I guess, yeah, the fact is that we can’t help but be inspired by him. The characters he puts on screen, the emotional complexity of those people, the camera movements and the way he explores life is so – it’s evergreen.”

Much has been made of Scorsese’s recent comments that Marvel films aren’t cinema. (“It’s absurd that was even a controversy,” Josh said.) But the New York Times op-ed Scorsese penned in reaction to the hullabaloo wound up a thoughtful piece that, per Josh, explored how movies are “documents that really allow us to question human behavior and really look at it in a microcosmic way.”

Scorsese states in the op-ed that an essential component of cinema is “the unifying vision of an individual artist,” describing something immediately apparent in the Safdies’s film. (In this context, they operate together as that artist.) Each of their projects favors an empathetic, if not always sympathetic, view of its flawed characters. This was true of “Good Time,” as well as of “Heaven Knows What,” their raw 2014 film about a heroin addict that led Pattinson to approach them about collaborating.

Such characters give “Uncut Gems” its title, according to Benny. They’re “rough and ugly on the outside” but can be fascinating once you look below the surface. As with the opal, which Garnett’s character regards as a magical token of good luck but that Howard values only for its monetary worth, you have to put in the work to see that beauty. The Safdies mine for what lies beneath Howard’s loathsome behavior.

“Howard may be doing bad things, but he’s not a bad person,” Benny said. “It wouldn’t work with anybody else. We looked at other actors, but it never fully made sense. It was really only when Sandler hopped on board that we really could take it home.” 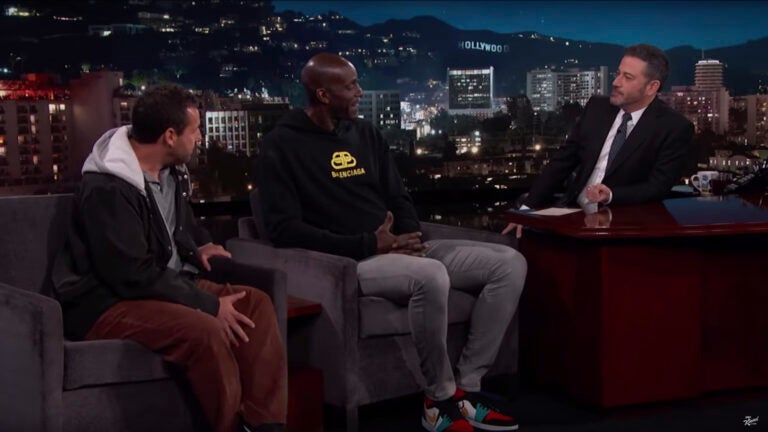 Adam Sandler talked about shooting hoops with Kevin Garnett, getting punched in the face for ‘Uncut Gems’